I was talking to a guy earlier today about NBC honcho Jeff Zucker‘s earlier refusal to back off from broadcasting the Golden Globes on 1.13, which, if he’d stuck to this position, would have killed the show because all the movie stars would have refused to attend. (NBC is said to be backing away from this, although nothing is official as of this writing.)
In any case, the guy then observed (not necessarily referring to Zucker specifically) that “the most successful people in life are often the ones who are willing to be the biggest assholes,” or words to that effect. And I thought, “Hmmm…never heard it put quite that way before.”
Here’s another way to put it: people who are afraid to use power (which would include those who are afraid to act forcefully out of fear of what people might think) don’t usually hold on to power for very long. The serious tough hombres are not, as a rule, boy scouts who are hoping that mommy will give them extra cookies as a reward for earning a merit badge.

N.Y. Times columnist Caryn James is calling George Clooney the definitive yesteryear movie star because his films are almost always “period” in one way or another. His next film, Leatherheads, which he directed and starred in, is a 1920s football tale, she reports. Clooney’s live-TV, black-and-white production of Fail Safe was a time-capsule thriller pulled from the early ’60s. O Brother, Where Art Thou? was a ’30s Depression-era piece. The Good German is a post-war Germany Michael Curtiz deal. 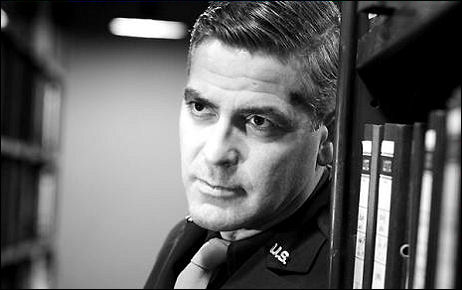 What else? Good Night, and Good Luck is set in the mid ’50s McCarthy area. Confessions of a Dangerous Mind goes from the √É¬¢√¢‚Äö¬¨√¢‚Äû¬¢60s to the √É¬¢√¢‚Äö¬¨√¢‚Äû¬¢80s and doesn’t touch the present. Intolerable Cruelty is an updated ’30s screwball comedy. Clooney wanted to do a TV version of Network, the 1976 Paddy Chayefsky-Sidney Lumet classic. Ocean√É¬¢√¢‚Äö¬¨√¢‚Äû¬¢s Eleven and its sequels are tributes to early ’60s Rat Pack Vegas. Even the contemporary Michael Clayton is tonally a √É¬¢√¢‚Äö¬¨√¢‚Äû¬¢70s political thriller.
All these examples have been noted by James except the Fail-Safe and Network projects.
“As [Clooney] sees things, it was not nostalgia but a search for strong, unusual material that led him to the past. ‘I think we all have these ideas: The world was better then, clearer, easier,’ but making so many period films ‘wasn√É¬¢√¢‚Äö¬¨√¢‚Äû¬¢t in any way a conscious thing,’ he said. ‘I did some contemporary pieces that weren√É¬¢√¢‚Äö¬¨√¢‚Äû¬¢t very good,’ then started making different choices.”
Oh, and Deadline Hollywood Daily’s Nikki Finke reported a little while ago that no one is confirming that Times Of London John Harlow article that Clooney was a “major force” behind the union A-Listers refusing to cross picket lines to attend a televised Golden Globes, etc.

32 Comments
Almost a year ago today

51 weeks ago — on 1.16.07, as the ’07 Sundance Film Festival was just starting and only days before the Academy would officially announce that Dreamgirls would not be a Best Picture nominee — N.Y. Times reporter Jeff Zeleny wrote that Senator Barack Obama took his first solid step into the Democratic presidential race by opening “an exploratory committee to raise money and begin building a campaign designed to change our politics.” And man, the acid cynicism that rained down from 85% to 90% of the HE talk-backers was like…whew. Proud of yourselves?

Warner Bros. going exclusively for Blu-ray means that hi-def DVD format war is probably over. Toshiba’s HD-DVD format is the loser and blah, blah. I’m still looking at $1750 or thereabouts for a 40″ LCD or plasma flat-screen plus the Blu-ray player and all the damn Blu-Ray discs I’d have to buy. Before you know it I’ll have gone through nearly three grand, and it’ll just pile on thereafter.

I’d like to do this because I love the idea of everything looking that much better, but on another level I’m figuring who really needs it? Regular DVDs look pretty damn good on my 36″ Sony flatscreen. And when will the next format turn come along and render Blu-ray obsolete? I don’t trust anybody or anything. I’m from Missoura.

“Bush and Cheney are clearly guilty of numerous impeachable offenses,” writes former presidential contender and U.S. Senator George McGovern in today’s Washington Post.
Now he’s pushing for this? A year to go and he wants to trigger a huge Congressional psychodrama in an election year that’s suddenly taken a turn for the positive? McGovern must be writing this for posterity, so he can repeat to himself and declare for history’s sake that Bush-Cheney have been the worst ever…worse than Nixon-Agnew, even.
“They have repeatedly violated the Constitution. They have transgressed national and international law. They have lied to the American people time after time. Their conduct and their barbaric policies have reduced our beloved country to a historic low in the eyes of people around the world. These are truly ‘high crimes and misdemeanors,’ to use the constitutional standard.
“From the beginning, the Bush-Cheney team’s assumption of power was the product of questionable elections that probably should have been officially challenged — perhaps even by a congressional investigation.
“In a more fundamental sense, American democracy has been derailed throughout the Bush-Cheney regime. The dominant commitment of the administration has been a murderous, illegal, nonsensical war against Iraq.
“That irresponsible venture has killed almost 4,000 Americans, left many times that number mentally or physically crippled, claimed the lives of an estimated 600,000 Iraqis (according to a careful October 2006 study from the Johns Hopkins Bloomberg School of Public Health) and laid waste their country. The financial cost to the United States is now $250 million a day and is expected to exceed a total of $1 trillion, most of which we have borrowed from the Chinese and others as our national debt has now climbed above $9 trillion — by far the highest in our national history.
“As we enter the eighth year of the Bush-Cheney administration, I have belatedly and painfully concluded that the only honorable course for me is to urge the impeachment of the president and the vice president.”

The instant I saw the below photo of Steven Soderbergh, allegedly taken during filming of The Argentine on or about 11.16.07, in Campeche, Mexico, I naturally said to myself, “Hey, Woody Allen in Bananas!” The Allen film, released in ’71, depicts a satirical version of the Cuban revolution in the make-believe country of San Marcos. Soderbergh’s The Argentine, one of two forthcoming dramas about Ernesto “Che” Guevara (being portrayed by Benicio del Toro), is a verite telling. 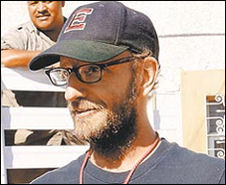 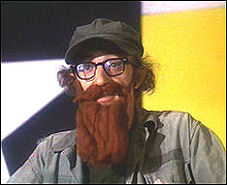 Steven Soderbergh on or about 11.16.07 (from a Benicio del Toro website); Woody Allen in Bananas.
January 6, 2008 2:07 pmby Jeffrey Wells
3 Comments
Threat to the industry

“A continuing industry mess of labor strife (contracts with the directors’ and actors’ guilds expire June 30) probably threatens the future as much as it does the current [Oscar] telecast,” writes N.Y. Times awards-season columnist David Carr in today’s edition.
“The Oscar-viewing habit is no longer as ingrained as it used to be, and no one involved wants to give audiences a reason to tune out all the more. And if the writers’ strike goes on much longer (and the directors and actors join them), future Hollywood fare — blockbusters, Oscar hopefuls and little movies with big upsides alike — may never make it into production.
“There may be an unimpeded telecast in 2008, but will there be any movies in the coming years worthy of the ultimate tribute in entertainment?”

Variety‘s Dave McNary reported an hour ago that NBC “appears to be backing away from telecasting next Sunday’s (1.13) Golden Globes Awards — allowing the event to proceed without TV cameras.”
A guy who hears things told me this morning he’s “spoken to a person who knows NBC and says they’re definitely not going ahead with the telecast. It’s obvious…. nothing is going to happen if they broadcast it.”
“The network had not issued an official confirmation Sunday and there was no update from the Hollywood Foreign Press Assn. or show producer Dick Clark Prods. But industry sources said NBC appeared to be relenting on its previous insistence that it would telecast the awards, even with stars unwilling to cross WGA picket lines.
“The absence of a telecast would enable the HFPA to stage the Globes as a private party at the Beverly Hilton — with hopes that the full complement of stars would attend. WGA officials have indicated that the guild won’t picket a non-televised event.
“Chances of a televised show dimmed Friday when SAG president Alan Rosenberg announced that not a single one of the more than 70 actors nominated for a Golden Globe would attend the ceremonies because of the WGA’s plans to picket the event.”

Forget it, Alan Rosenberg! The Screen Actors Guild president’s request to publicists, made during a teleconference session two days ago, that they keep clients who’ve been nominated for a Critics Choice Award from attending Monday night’s awards ceremony, appears to be dead in the water. Or so I’ve been told.

I learned this morning that since Rosenberg made his request on Friday, not one single publicist has contacted officials of the Broadcast Film Critics Association, which votes for the awards and stages the event, with news that their clients won’t be attending tomorrow night.
The Critics Choice Awards and the VH1 broadcast of the event are both going ahead as scheduled late tomorrow afternoon (red-carpet arrivals starting at 4:30 Pacific, the show itself starting at 6 pm Pacific) and the whole gang is coming, or so I’m told.

Why have the publicists ignored Rosenberg’s request? Because Bob Bain Prods. and VH1 aren’t WGA signatories and therefore there won’t be WGA pickets. The only thing that scares talent is the idea of crossing picket lines so the issue is moot, despite what Rosenberg has asked for. And because, as one insider speculates, “the publicists can see right through Rosenberg’s agenda in wanting the SAG Awards to be the only award show that comes off without a blemish or interruption.”
The insider says that “talent was always going to come anyway to the Critics Choice Awards” and that Rosenberg’s request for them to not attend has simply fallen on deaf ears.

Joe Leydon has warned of severe consequences if I keep up with the Zodiac thing, but it would be cavalier of me to blow off this excellent 1.6.07 assessment by N.Y. Times critic Manohla Dargis, who also feels that this…uhm, you know, Z-film should be a Best Picture nominee and that David Fincher should be nominated for Best Director. Maybe it’s time for Leydon to get in touch, straighten her out, etc. 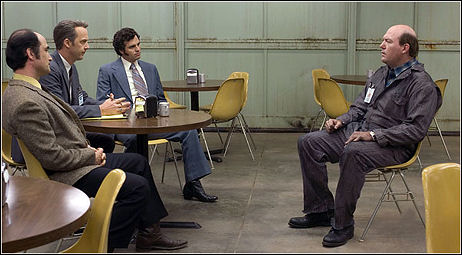