“Heath was bursting with creativity. It was in his every gesture. He once told me that he liked to wait between jobs until he was creatively hungry. Until he needed it again. He brought that attitude to our set every day. There aren’t many actors who can make you feel ashamed of how often you complain about doing the best job in the world. Heath was one of them.” — from a 1.26 Newsweek tribute piece by Dark Knight director Chris Nolan.

I made good on my word this evening. I blew off a Santa Barbara Film Festival movie, walked down to the Fiesta Five and plunked down ten bucks to see Rambo. Maybe it was because I’ve been watching nothing but festival movies for the past week and a half, but it’s so relentlessly blunt, so absurdly violent in a ’70s exploitation vein, so visceral and depraved and elbow-deep in jungle blood & guts that I loved it.

Every time a head got sliced or blown off, I laughed or let go with a big “yawww!” So did the mostly-male audience which applauded at the end. Everyone had a great time. I felt relaxed with these guys…bonded.
In other words, Rambo “works” in its own deranged way. It’s like an ultra-violent half-time show at the Super Bowl. It’s shit, of course, but it’s fast, fun and agreeably grotesque. Looking buff as hell and saying as little as possible, director-writer Sylvester Stallone keeps the action fast, tight and moist. It’s somehow exhilarating to watch scores of Burmese bad guys get their stomachs opened, bodies cut in half, windpipes ripped out, blown to smithereens (loved that thermonuclear claymore mine!)…and it just keeps getting better and better.
If you have any appreciation for coarse cheeseball action crap, you can’t help but be satisfied. Stallone deserves credit for taking things down to the brute-caveman level and unapologetically going to town. 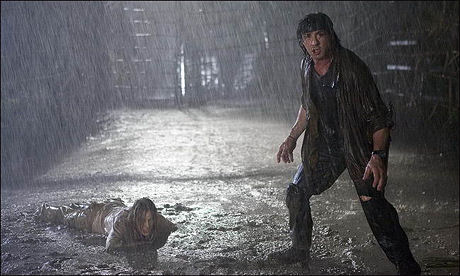 This is the second best Rambo film after First Blood, and although it’s obviously not meant to be “funny,” it is at times, wildly so. I laughed out loud on a good five or six occasions. Quentin Tarantino and Robert Rodriguez are going to love this thing. You could even make a case for Rambo being an instant porno-violent classic in the vein of Ron Ormond‘s The Monster and the Stripper, Alejandro Jodorowsky‘s Santa Sangre, Herschel Gordon Lewis‘s Blood Feast…that line of country. 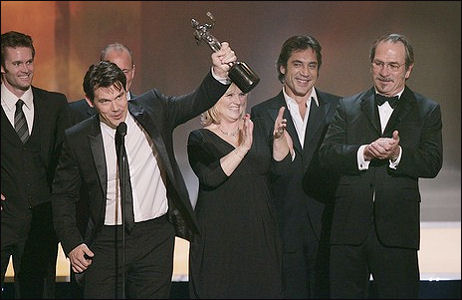 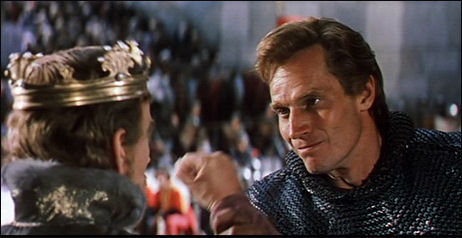 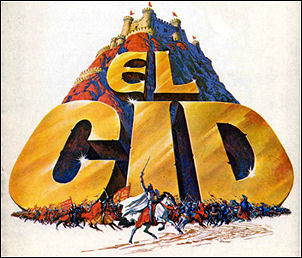 Red Carpet District‘s Kris Tapley has passed along two stories of vibe-rupture at last night’s DGA Awards — a reportedly drunk Sean Young heckling Julian Schnabel from the audience, and a crack by Michael Clayton director Tony Gilroy (“George Clooney, who couldn’t be here tonight, but we’ll tell him it was all about him…”) not going over all that well.

Last night’s South Carolina victory was splendid, and the Obama endorsements by Caroline Kennedy (in today’s N.Y. Times) and Sen. Ted Kennedy (the formal announcement will be made tomorrow) are well and good. But the bulk of Obama’s support is from better educated, higher-income Democrats, the independent sector and the under-30s, and this is not enough of a coalition to put him over in the Feb. 5 “tsunami Tuesday” Democratic primaries.
This and other considerations have been hitting me all morning and turning this into a Very Black Sunday. Billary’s success in framing the race in racial terms by selling the “Obama = black candidate” concept to their support base — i.e., the less-educated, middle and lower-middle income Democratic rank-and-filers who, let’s face it, tend to embrace simplistic racial-divide thinking more readily than the party’s better educated, more independent minded voters.
The Clintons knew exactly what they were doing, and they played it this way because they know most voters are malleable and manipulatable. Bill Clinton’s comment yesterday about how Jessie Jackson won twice in South Carolina in the ’80s was foul and despicable. I’ve hated politicians before, but the Clintons have done something truly ugly and repugnant here. I’m appalled and disgusted by them both. We are gradually painting a portrait of who and what we are in this primary election, and in the last couple of weeks we’ve seen some truly poisonous brush strokes dabbing the canvas. A curse on the Clintons, a pox on their house. Any friend of theirs is no friend of mind.
There was a poll mentioned by Chris Matthews this morning that showed people believe Obama to be much more of a uniter than Billary. Caroline Kennedy believes he is that kind of candidate; tens of thousands do. That was the pollen floating across this nation only 25 days ago, give or take. The only group that Billary is going to unite will be the Republicans — they’re in pig heaven right now, and no wonder. The word “Billary” has hereby been burned into the historical record as synonymous with sectarian divisiveness and feelings of deep loathing among a wide political spectrum of America.
This was going to be the year of a Democratic victory and a real turn in the road… hah! A part of me wants her to lose even if it means a Republican taking the White House. That’s irrational and unwise, I know, but I despise them that much.

Last night the legendary Cate Blanchett — the great actress of our day, the under-40 Meryl Streep — did the old stage-chat-and-film-clips routine with Leonard Maltin at Santa Barbara’s Arlington theatre. She’s compulsively honest, a marvellous wit, fast on her feet, always with a good story or a fresh thought. And she’s about six or seven months pregnant, to judge by the size of her kangaroo pouch. 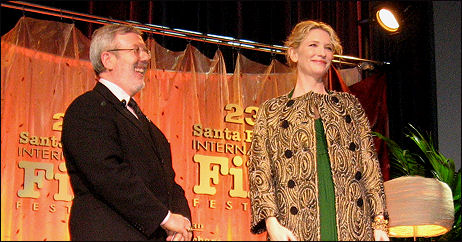 Blanchett should win the Best Supporting Actress Oscar for her I’m Not There performance for the simple reason that it’s ten times the performance that Amy Ryan gives in portraying a low-life, coke-snorting Dorchester mom in Gone Baby Gone. My gut tells me this isn’t cutting enough ice with Academy voters to assure a Blanchett win, but maybe not.
I left a little before the end of the show and walked down State Street with my nickle-and-dime umbrella, braving the sporadic rain and gusty, tree-bending winds. I eventually arrived at the after-party location only to discover that the good and gracious people putting on the event had decided to make early arrivers like myself stand outside and wait for a bit.
You have to be hard in the party-planning business. You can’t let the idea of guests suffering the elements for 10 or 15 minutes affect your resolve. A bunch of us were huddled together like sheep against the light downpour and the blustery air currents, but I’m glad the party-planners showed their mettle. I enjoyed shivering outside and getting damper by the minute. It was good for my soul so I’m glad I went…really. 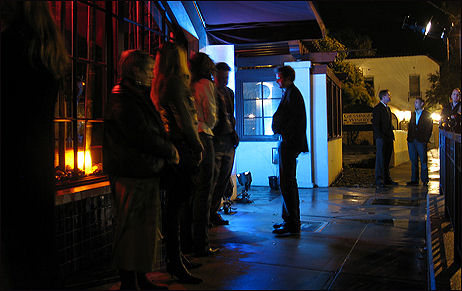 You can’t see the rain or the wind in this photo of waiting guests, but trust me — they were there.
January 27, 2008 11:05 amby Jeffrey Wells
23 Comments
Weekend box-office

Jason Friedberg and Aaron Seltzer‘s Meet the Spartans, which no one with a semblance of taste wants to see much less write about, earned $18.7 million at 2605 theatres this weekend. Running a close second was Sylvester Stallone‘s Rambo, which most critics have dismissed but some HE readers have said good things about, with $18.2 million on 2751 screens. I plan to actually pay to see it sometime later today.

Joel and Ethan Coen won the the DGA’s best feature award for No Country for Old Men at last night’s ceremony in Century City. Obviously this means what it means as far the Oscar situation is concerned. Here, courtesy of The Envelope‘s Tom O’Neil, is an mp3 of Martin Scorsese announcing the award and of Joel and Ethan accepting (and giving special thanks to NCFOM producer Scott Rudin). 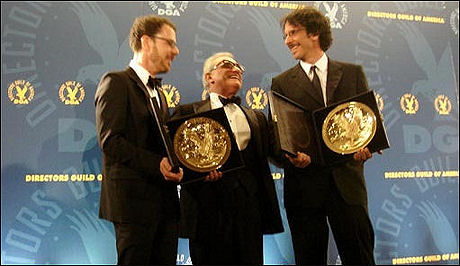 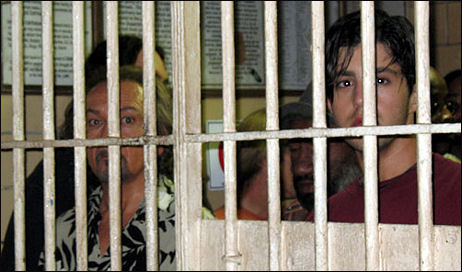