A friend from Boston wrote this morning to say that she “didn’t see a single one of the nominated movies this year. The only one in the whole bunch that I saw was Once, and it was fun to see them win best song. A lot of people I talked to only saw Juno and none of the others. What percentage of people do you think are like me and didn’t see any of those movies? 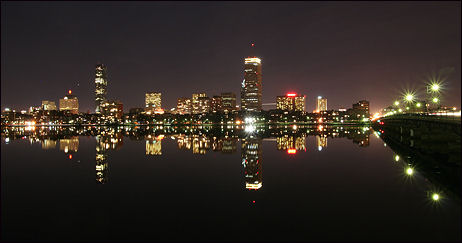 “Too many seem to have too much violence, too many downer stories. We want to see something uplifting. I love Tilda Swinton but I have no desire to see Michael Clayton. Away From Her, too depressing. Other people who saw Atonement said the same thing I did — they couldn’t get invested in the characters.”
I answered that what she’s feeling is valid to some extent, but “movies are not supposed to be pills that you take to feel better. They’re not travelling carnivals with elephants and jugglers. They’re supposed to be aesthetic journeys and emotional hikes that get us in touch with things that too many of us tend to push away (or anesthetize ourselves from) in our day to day. They’re supposed to be compressions and condensations that create indelible moments, insights and excavations into our collective soul.
“We’re only here for 80 or 90 years, we need to figure some stuff out before we pass on, and good movies are part of the learning-and-realizing process.
“I don’t like downer movies either, but ‘uplift’ can turn rancid in the wrong hands. The bottom line is that 85% to 90% of the time movies looking to provide uplift are awful. I just want movies that are really engaging by virtue of being well made by talented people, and which tell fundamental or hidden truths and generally shed light in this or that way.”
She replied, “What if nobody actually saw all those movies? Isn’t that something you should talk about?”
I’m replying as follows: “These are some of the best movies that the filmmaking culture is turning out now. Every year there are at least 20 or 25 films that are somewhere between excellent, very good or good enough to watch and think about later. If regular people in Boston and Saskatchewan are living such insulated and cut-off lives that they can’t be bothered to go to some of these films unless it has an advertised ‘happy pill’ vibe then the hell with them. They’re children. I have no time for childishness, and neither does anyone else of any worth. Life is short.”

Eleven observations & thoughts from the Oscar telecast (and one from the Spirit Awards), now that I’m catching my breath and have a few moments to tap something out: 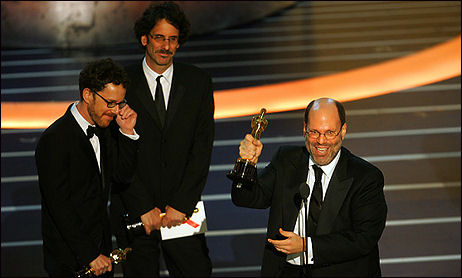 (1) Joel and Ethan Coen, good fellows that they are, were a little too modest and self-effacing last night. Their personalities are their personalities, and that’s fine. But they’re clever writers with things on their minds, and for their acceptance speeches they could have written something that might have cut through to the marrow or acknowledged something other than the state of winning. Anything that might have made people say, “Wow…good words.” But their attitude seemed to be “okay, we have to do this so let’s be gracious…it’ll all be over tomorrow morning and then we can get back to work.”
(2) Somehow the actual vote tallies have to be revealed some day. I’m told that the specific vote counts are kept for seven years and then flushed down the toilet. For years prior that find one of the old Price-Waterhouse guys and get him to open up. It would make it so much more fascinating to know how close this and that vote was. A legendary book it would be. (I hate sounding like fucking Yoda but sometimes that’s the best way to say things.)
(3) Roy Scheider died two weeks ago (2.10.08) — obviously plenty of time to slip him into the death montage. Any YouTube kid with editing software could have put his photo into the existing montage that showed last night . Why don’t those who handle this presentation keep themselves open to last-minute passings? They’re so ’90s! There’s no technological reason not to do this. And why was Brad Renfro blown off? 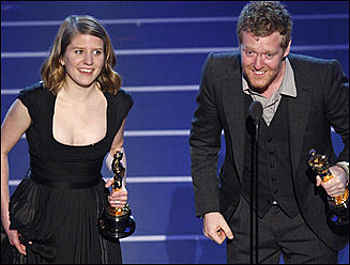 (4) Cheers again to Colin Farrell if it’s true he was the one who urged the producers to let Marketa Irglova back on stage to say a few words about having won the Best Song Oscar (along with Glen Hansard) for “Falling Slowly.” Marketa’s remarks, Glen’s thank-you and Javier Bardem speaking to his mom in Spanish were the three best moments of the night.
(5) I was a Marion Cotillard supporter going back to February ’07 but over the last several weeks I detached and started drinking the Julie Christie kool-aid, believing those reports that the over-65 Academy crowd wants to give her a kind of career-recap nostalgia Oscar. Now I’m slightly ashamed that I didn’t stay more loyal to Cotillard. (I recently described her as a personal Best Actress favorite who’d seemingly been overtaken.) I also passed along a late-wave observation from Pete Hammond that “the seeds of her grass-roots campaign [may have] taken root.” Who were the tea-leaf readers and friends of older Academy members who claimed Christie had the heat? Maybe the winning Cotillard margin was razor-thin, but the Christie crowd needs to come forward and own up and explain why it went the way it went.
(6) Jon Stewart‘s tuxedo pants were way too baggy. They looked like grand poobah black-silk pajamas that Julian Schnabel might wear. Anyone who’s halfway hip knows that suit and tuxedo pants are cut fairly trim and tight now. Stewart’s hip-guy factor dropped because of this. In this one respect he caused himself to look slightly clueless up there. He needs to find himself a new gay tailor. 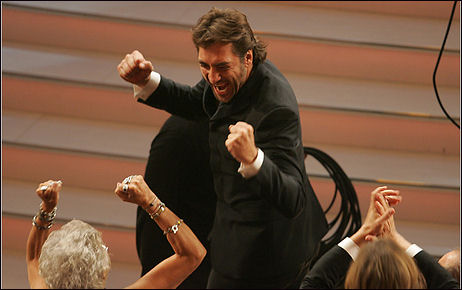 (7) I loved Stewart’s joke about not believing Vanity Fair’s claim that they cancelled their party out of support and respect for the then-striking writers. And the follow-up: “If Vanity Fair wants to show respect to the writers, next year they could invite some of the writers to the Vanity Fair party.” And his noting that Away From Her, a movie about a woman who forgets her own husband, has been called “the feel-good movie of the year” by Hillary Clinton.
(8) It was so heartening that Transformers won absolutely dead fucking nothing. Simply wonderful.
(9) I wish I’d seen the red-carpet bit when Regis Philbin saying to George Clooney that “everyone in this town wanted to be Cary Grant, and now they want to be George Clooney” and Clooney replying, “That’s because he’s dead.”
(10) I need to find out today what happened with Charles Ferguson‘s presumably favored No End in Sight not winning the Best Feature Documentary, and Alex Gibney‘s Taxi to the Dark Side taking it instead. Some sort of brilliant strategic end-move by Thinkfilm (which had the Gibney as well as War/Dance on its plate) that I’d like to hear about.
(11) The best moment inside the big Spirit Awards tent on Saturday was when the rain started to really come down. The pelting sound suddenly got louder, the heavy-plastic top began to ripple and billow, and people nearby began to look around and look at each other with very faint “uh-oh” expressions. (A woman in her 20s sitting next to L.A. Weekly critic Scott Foundas — presumably his date — was especially animated in this respect.) There was something affecting about God and nature expressing something basic and real outside that was indifferent to the goings-on inside. It was good for the soul.. 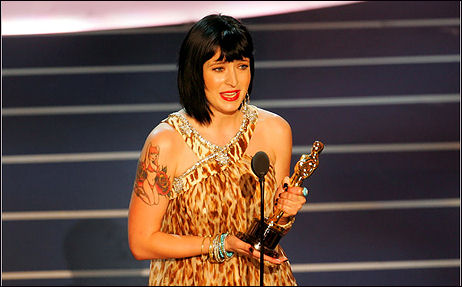