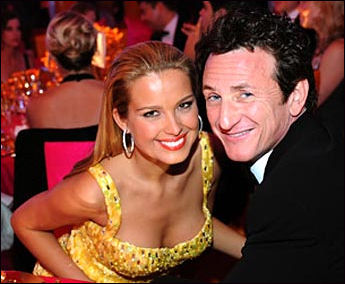 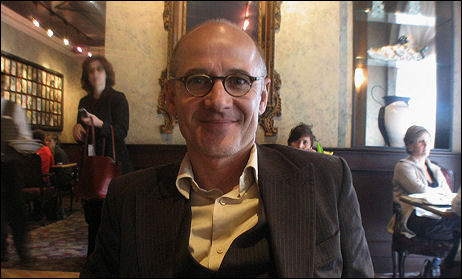 Due respect, but Tina Fey‘s pro-Hillary bit 36 hours ago on Saturday Night Live was not cool. Not at this stage of the game. Not with Hillary’s latest race-baiting maneuver. She’s now on the HE shit list and will stay there until she writes or directs or appears in a really good film. I’m sure she’ll be fine with this. That said, her riff about how it’s good to be a bitch because they get things done (or a mean nun because they make you learn things) is pretty good stuff.

“Change” is obviously a big theme in the political landscape right now, and there are definite signs over the last couple of years that things have been changing profoundly in terms of Oscar winners also, or more precisely in terms of the makeup of Academy voters. It’s the most interesting thought I’ve heard all day about last night’s show, and it came out of a chat I had a few minutes ago with Pete Hammond. Here it is.

The Envelope‘s Tom O’Neil has complained that last night’s Oscar winners were the darkest and creepiest ever. “Six [Oscars] went to pix about a wacko serial killer (No Country) or a psycho oil baron with murder on his mind (There Will Be Blood). Together they won picture, director, adapted screenplay, actor and supporting actor.
“The other two categories went to, well, somewhat lighter fare: a film about a drug-addicted chanteuse (La Vie en Rose) and a pregnant teen with a bad ‘tude (Juno).”
O’Neil was also on the Bill O’Reilly Radio Factor discussion during an Oscars segment that asked “what do the Academy Awards’ winners and losers tell us about our culture?” A reader wrote during the broadcast that O’Neil was “foaming at the mouth playing up the Heartland vs. Hollywood routine…going after the Academy for picking ‘avant-garde’ choices to antagonize all the soccer moms and farmers in the fly-over states…trashing ‘leftist’ Jon Stewart, trashing Obama and celebrities who act political…[claiming] he mourns for the days of Bob Hope.”
O’Neil says that O’Reillly started the conversation and “all I was doing was bolstering his points.”
He added that he thinks that Stewart “is the worst host ever…the Neilsen ratings were the absolute lowest in history….they should have someone in the family host it…Jim Carrey, George Clooney…not some New York comic like Stewart or David Letterman or Chris Rock.”

An hour ago I heard the best explanation (or at least the best partial explanation) as to why the Julie Christie momentum bandwagon stalled and gave way to Marion Cotillard‘s winning the Best Actress Oscar. (And I’m not getting into this topic as a complaint — I’ve long worshipped Cotillard’s La Vie en Rose performance as Edith Piaf.) I’ll give the person who told me credit for this when I hear from him and he says it’s cool, but until then here it is non-attributed.
Cotillard beat Christie because young actresses almost always beat older actresses in the Best Actress race. One reason this happens, it is believed, is because of the male geezer vote, which always responds to the sexual allure element. This is precisely how the guy put it: “They vote with their dicks, the geezers.”
The big exception to the rule was Helen Mirren winning last year for The Queen, but remember how she said saucy things all through the campaign, reminding everyone that she was a woman with a considerable sexual appetite and so on, posing for those hot-mama magazine covers. You can’t tell me that didn’t boost her vote tally.
I think it’s fair to speculate that Diablo Cody may have won also because of the old-geezer vote. I know that Lorenzo Semple, Jr., said in one of his “Real Geezer” confessions (it’s either in segment #1 or segment #2) that Cody’s stripper background was a decisive factor in his voting for her.

This is it, the absolute ethical nadir of the Hillary Clinton campaign so far. To my mind sending out that 2006 photo of Barack Obama dressed in Somali garb during a visit to that country is scummy and reprehensible almost beyond measure. It is a a classic race-baiting tactic obviously aimed at latently racist rubes from Texas and Ohio who say they’re still on the fence.
Reacting to a headline on the Drudge Report (still up as I write this) claiming that aides to Senator Clinton had e-mailed the photo to reporters and editors, Obama’s campaign manager David Plouffe accused the Clinton team of “shameful offensive fear-mongering” with what is obviously an “attempted smear” that is seeking to inflame racial consciousness among those possibly pre-disposed to black-vs.-white thinking. This even outdoes what Bill Clinton tried to do in the lead-up to (and just after) the South Carolina primary.
Equally disgusting is a statement from Clinton campaign honcho Maggie Williams saying that “if Barack Obama’s campaign wants to suggest that a photo of him wearing traditional Somali clothing is divisive, they should be ashamed….Hillary Clinton has worn the traditional clothing of countries she has visited and had those photos published widely…this is nothing more than an obvious and transparent attempt to distract from the serious issues confronting our country today and to attempt to create the very divisions they claim to decry.”
A statement like that coming from a woman of color should be enough to make anyone of any ethical conscience physically sick. The mentality behind the mailing of the photo is demonic in itself, but to try and lie your way out of it by saying the Obama campaign should be “ashamed”? Remember the name — Maggie Williams — and keep this in mind when she comes calling in months and years hence. For she is a liar, and the father of it. And she will have this statement hanging around her neck for the rest of her life.