E-Film Critic’s Eric Childress is wondering why Paramount is using Iron Man quotes from the relentlessly elastic and seducable Peter Travers along with old-time accomodators like Jeffrey Lyons and Gene Shalit plus Moviemantz‘s Scott Mantz. “Couldn’t find anyone better than that, Paramount? Seriously? You may not wanted to associate your superhero flick with the online geek sites, but at least some of them write more than just dumb-dumb phrases like Lyons and Shalit.” 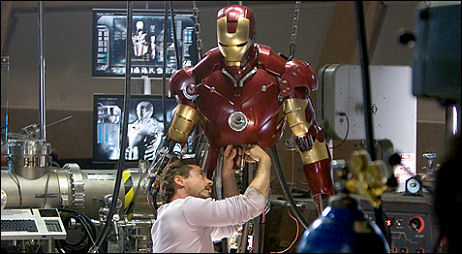 Penn Jillette rambles for over seven minutes in order to deliver a cynical suspicion — i.e., that the Obama-Wright relationship might have ended due to a deliberate scheme. Please. Obama’s dad left when he was two, and Wright filled that vacuum when Obama came of age in his mid 20s, and family is family.
Americans always vote over character issues and they don’t get the hold that fathers have over their sons? You don’t need a master’s degree to suss this stuff out, but a lot of baboons out there are still hung up on why Obama stayed with Wright for as long as he did.
How many guys out there have cut ties with their dads because their political beliefs aren’t in synch with his, or because his views on this or that are extreme or perverse or impossibly retrograde? Not one. If your father’s philosophy is asinine or astonishing, you might argue a bit once in a while but you always let it go after four or five minutes of pointless debate because his jerkweed beliefs are set in stone. You suck it in and change the subject and say “please pass the mashed potatoes.” Anyone who says they don’t play it this way is a liar.
There’s also this view from Chicago Tribune reporters Christi Parsons and Manya A. Brachear:
“In Chicago, the choice to attend [Rev. Wright’s] Trinity for so long is a little less of a puzzle, given Obama and Wright’s shared history on the city’s South Side and the spiritual and cultural haven the church and pastor offered the aspiring politician.
“Membership at Trinity is often taken as a progressive credential, a sign that a person is attuned to issues of social justice and equality and supportive of issues important to its gay and lesbian members.
“‘Rev. Wright is more sophisticated intellectually than many pastors,’ said Kwame Raoul, the state senator who took Obama’s place in the Illinois legislature and who is a member at Trinity. ‘He’s well-read, he takes the theology seriously. He doesn’t just make quick references to the Bible but offers a very deep analysis and an application to current events.’
“In an interview in early 2007, Obama said Wright had affected his politics by nurturing his connection to the historically black church and how he understands the obligations of his faith.
“‘He’s been somebody who has helped me feel comfortable with some of my doubts when it comes to faith and how to work those through,’ Obama said at the time. ‘His scholarship is very rigorous, and his sense of social justice is very keen.'”