Straight from Mark Halperin‘s The Page: “YOU CAN’T MAKE THIS UP: Hillary Clinton enthusiastically picked a filly named Eight Belles to win the Kentucky Derby and compared herself to the horse. Eight Belles finished second. The winner was the favorite, Big Brown. Eight Belles collapsed immediately after crossing the finish line, and was euthanized shortly thereafter.” (posted at 8:10 pm.)

I can’t say I’ve watched very many celebrity endorsements on behalf of of Barack Obama, but Tom Hanks‘ video, which he apparently wrote and shot on his own, is the most eloquent and straight-talking-est testimonial on video that I’ve seen from…I was going to say from a Hollywood type but I can’t think of anyone who’s said it better. Really. It’s on his MySpace page.

Last night In Contention‘s Kris Tapley took a second look at Iron Man with some paying customers, and thereby caught the new The Dark Knight trailer. He came away believing that cowriters Chris and Jonathan Nolan “may have taken some liberties” with the facial scarring of Harvey Two-Face Dent (being played this time by Aaron Eckhart).

3 Comments
Where Are They?

I’ve been in love with those brilliant TV spots for a major insurance company in which a couple of people are talking about insurance — quietly, almost half-heartedly — while one of them watches a calamity take place outside, and is verbally unresponsive to what he/she is seeing. He/she just keeps talking, but what’s happening down below is nothing sort of catastrophic. One of the spots shows a window-washer about to fall; another shows furniture being tossed out a window and landing on a guy’s car.

I love these spots — they’re almost Buneulian-level comments on how many of us take in the world while staying in the safety of our own little bubbles or membranes. HE reader “bmcIntire” sent along the above YouTube clip. 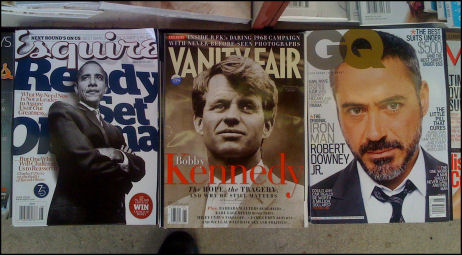 Someone asked last night what the most widely-shared statement might be among families or roommates, regardless of country, culture or economic station. Something that people say every day to others living under the same roof, millions of times daily, in every corner of the globe. And I said that the most common one of all might be “I wouldn’t go in there if I were you.”

My father taught me long ago by example that adulthood was a fairly grim calling — a state of mind that allowed for very little joy or spontaneity, that was mainly about duty and drudgery and — although he’s been in AA since the mid ’70s — a fair amount of drinking on weeknights and weekends. So I’ve been fairly averse to the idea of fulfilling my father’s idea of adulthood for most of my life. 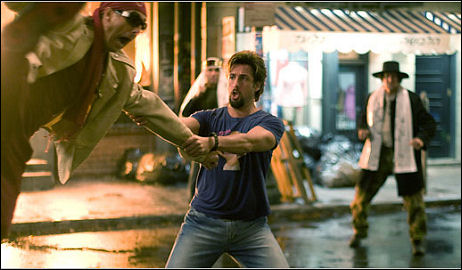 from Adam Sandler’s You Don’t Mess With the Zohan

But sometimes I feel as if the pendulum has swung too far in the other direction, as N.Y. Times critic A.O. Scott points out in this piece about perpetual male adolesence as exemplifed by Adam Sandler‘s screen roles.
Adam Sandler, who will turn 42 on September 9th, “did not invent the archetype of the overgrown man-child, which has been around at least since the silent era,” Scott writes. “Nor has [he] been alone, over the past 15 years or so, in turning male infantile aggression into the basis of a lucrative and long-running movie career. The male rejection of adulthood is now the dominant attitude in Hollywood comedy, even (or perhaps especially) in movies whose sexual frankness makes them officially unsuitable for children.
“Occasionally you will see a functioning if beleaguered dad, usually a widower, like Steve Carell’s character in Dan in Real Life. And sometimes, as in Little Miss Sunshine, a coeducational, multigenerational ensemble will carry the therapeutic and satirical burdens of the genre. But far more often the center of attention will be a guy, his buddies and his toys. He will, most of the time, be nudged toward responsibility, forgiven for his quirks and nurtured in his needs and neuroses by a woman who represents an ideal amalgam of supermodel and mom.
“It would be hypocritical of me to dismiss the appeal of this fantasy and silly to deny that a lot of these movies manage to be both very funny and disarmingly insightful about the male psyche. But I suspect I’m not alone in growing weary of the relentless contemplation of that psyche in its infantile state, and of the endless celebration of arrested development as a social entitlement.”

“Working in a self-consciously quirky key that owes a strong debt to Wes Anderson‘s Rushmore, [director Garth] Jennings keeps his busy pieces in harmonious play, creating a miniaturized world as detailed, painstakingly determined and insulated as an ant farm. He crams the frame with bright colors and comic bits of business; tosses in an interloper, a French Billy Idol called Didier (Jules Sitruk); and makes room for the occasional melancholic stretch. And although the film√É¬¢√¢‚Äö¬¨√¢‚Äû¬¢s visual style feels more borrowed than organic, there√É¬¢√¢‚Äö¬¨√¢‚Äû¬¢s enough truth to [the lead characters’] actions — and to the uninflected, touching performances of the two young leads — to keep the film humming along, even when Mr. Jennings veers into sentimentality and lets one too many tear drop.” — from Manohla Dargis‘ N.Y. Times 5.2 review of Son of Rambow. 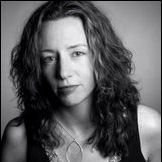 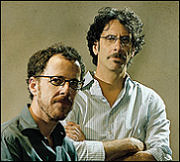 8 Comments
Force is a Wimp

It’s mostly the title, which says exactly what’s happening right now. The tone doesn’t feel right, though — good-bad Star Wars mythology argues with the complex and malevolent unfoldings of this campaign. Even without this, someone should have taken the time to refine the facial-pasting a bit more. 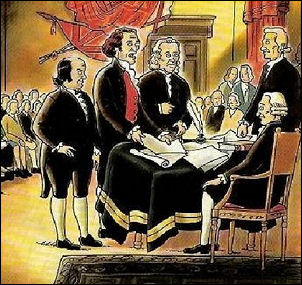 “I keep thinking we should include something in the Constitution in case the people are too dumb to realize it when they’ve been given a shot at electing a candidate of an obviously superior grade with a once-in-a-lifetime potential to begin to truly transform and set things right, and…you know, when their brain pans won’t allow them to understand that electing hollow proven liars offering retreads of past campaigns is only going to make things worse.” (Apologies to Dan Collins.)
May 3, 2008 9:08 amby Jeffrey Wells
11 Comments
Dragging It Out

I finally heard from someone about the Picturehouse/ Warner Independent situation. A story posted Thursday evening by Variety‘s Anne Thompson said that Picturehouse topper Bob Berney and Warner Independent chief Polly Cohen are “likely” to accept a bicoastal power-sharing arrangement that will preside over a merged operation. Then I heard this morning Berney “is leaving Picturehouse.”
Now I’ve been told by someone very close to things that the latter scenario is not true. Berney has “been open to Warner Bros. proposals, but they actually haven’t made any real decisions yet on how much they want to be in this ‘indie’ part of the business.” They haven’t made any real decisions? In my experience that means they’ve made a decision but lack the character to express it…no? “So this thing may drag on for some time,” the insider comments. Okay, good enough…and thanks.
From: Hollywood Elsewhere [mailto:gruver1@gmail.com]