Lena Gieseke‘s 3-D recreation of Pablo Picasso‘s Guernica. I’m wondering if any American painters or sculptors have created anything within the last three or four years about the horrors of Iraq? If so, have they appeared at an any galleries?

HE reader Matthew Dessem has sent along a still taken from that first seven minutes of Speed Racer clip that went up last Thursday. He pointed out the numerous duplications that the Wachowski’s CG guys copied and pasted to make up the crowd. The same five or six people are everywhere, and nobody is sitting in rows — they’re just thrown together in rough collage fashion. It’s no big deal, but I can’t recall seeing a frame capture of digital crowd with this many obvious repeats. (Click on the photo caption for a larger image.) 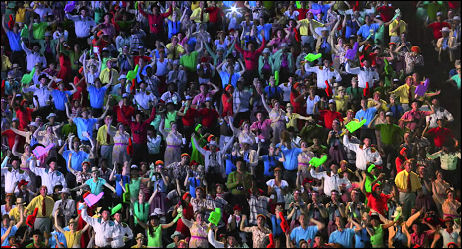 After reading Nikki Finke‘s well-reported story (last updated yesterday morning) about the temporary SAG shutdown of David O. Russell‘s Nailed, a Washington, D.C.-based comedy about relationships, politics and morality, I reviewed the Amazon.com information about “Sammy’s Hill,” the Kristin Gore novel that the script, co-written by she and Russell, is based upon, according to Finke.

There are differences between the book and screenplay synopsis, but the attitude and tone of both suggest that the film is going to be sharp and deranged. It seems right up Russell’s penchant for the dryly absurd. It doesn’t seem to be anywhere near as hyper or schizy as I Heart Huckabees, and doesn’t seem that removed from the realm of Flirting with Disaster — real neurotic people, a recognizable milieu and situations.
The discrepancies between the book’s story and what Finke says is the movie’s plot are striking, though. The movie literally involves the presence of a nail imbedded in a main character’s head, and there’s nothing like this in the book, for one thing. Russell’s film also seems a bit more sexually attuned. The more I examine the two stories, in fact, the less alike they seem. If anyone has a PDF copy of the script…
Finke writes that Russell’s film is about “a naive small town waitress (Jessica Biel) — the character’s name is Alice Eckle, according to the film’s IMDB page — who gets a nail lodged in her head and discovers a new-found sexual drive. When she travels to Washington to fight for better health care for the ‘bizarrely injured,’ she meets an unscrupulous U.S. congressman (Jake Gyllenhaal) — the IMDB says his name is Howard Ryder — who attempts to take advantage of her. James Brolin plays the U.S. Speaker Of The House.”

The book is about Samantha Joyce, “a 26-year-old self-deprecating health-care policy advisor to Robert Gary, a well-respected senator from her home state of Ohio.” There’s no Samantha on the IMDB page, and no Robert Gary character. There is, however, a Congressional Representative named Pam Hendrickson (Catherine Keener). So — help me out here — Alice Eckle is a working-class, less educated version of Samantha? She seems like an entirely different creation.
“Between endless work days, a grueling campaign schedule, and frequent trips to the pet store where she seeks advice on caring for her listless Japanese fighting fish, Sammy finds time to obsess over her new boyfriend, sexy speechwriter Aaron Driver.” This sounds like Gyllenhaal’s guy — same kind of name, same syllables — except he’s not a Congressman.
“As things heat up with Aaron, Sammy’s work schedule takes on a new intensity when Gary becomes the Democratic candidate for vice president. Along the way, scandal clouds both her personal and professional life, and our heroine discovers the often salacious underbelly of life on the hill.”
Update from HE reader Jeff Puim: “You and Finke have the whole Nailed premise all mixed up. Nailed is not an adaptation of ‘Sammy’s Hill,’ although both were penned by Kristen Gore. I think the confusion comes from the fact that in the original script Kristen uses the name ‘Sammy Joyce’ as the lead character, played by Jessica Biel (the character names have since been changed). As you mentioned in your article, she was also the main character in the book. But the stories are entirely different with the exception of the names of the respective heroines. The script is actually very funny. You’re right that it’s twisted. Very Russellesque.”
Nailed is about halfway done, having been shooting in Columbia, South Carolina since April. Finke has reported it was “shut down by the Screen Actors Guild on Friday because of insufficient funds on deposit with the guild.”
The shoot “is also in trouble with both IATSE and Teamsters,” she writes, adding that “some of those union members have left the beleaguered $25 million budgeted production. Rumors also are circulating that the state of South Carolina could withdraw its incentive monies because of the financing problems. Filmmakers hope to resolve the cash crunch and re-start shooting next week since principal photography is only at the halfway point.
“‘I am confident we will finish,’ an insider on the pic has told Finke. ‘The financing on this like most indies is based on bank loans and bridge loans. This is a matter of waiting on the bridge loan. Hopefully, it will all be resolved.'”
Finke is also hearing, though, that David Bergstein‘s Capitol Films, the film’s main producer, is a “troubled” operation. In 2006, Bergstein “acquired a leading UK-based international sales company which over the years had built a good reputation in the movie biz and made a wide range of commercial and critical successes, including Robert Altman‘s Gosford Park. But [a source from within] NYC film financing circles that ‘a shitload of people are owed a lot of money’ by Bergstein. ‘I heard this week that his major financing source, a hedge fund, has shut down and left him in the lurch.'”