Support on Patreon Follow @wellshwood
12 Comments
In and Out

Posts will be few and far between starting tomorrow morning due to last-minute running around before heading out to JFK for the flight to France. I may be able to tap some stuff out while waiting for this or that plane. The Big Black-Out period begins around 5 pm Eastern with the departure from Washington, D.C. (I went for a cheaper flight that entailed flying there first from JFK) to Charles DeGaulle. All in, it’ll be catch-as-catch-can for 18 to 20 hours. The thing to do during long flight periods, I’ve found, is take a lot of photos.

Steven Spielberg‘s long-delayed Abraham Lincoln movie, which I’ve been writing about for nearly three years as an example of Spielberg’s capacity for endless fence-sitting when so inspired, may finally roll sometime in early 2009. Variety‘s Michael Fleming, responding to a Spielberg comment made to the German weekly magazine Focus, reported today that the directing “will return his attention to an epic project about the 16th president” after shooting Tintin in the fall.

Great — heavy rain and wind will begin in the NYC area starting tomorrow morning. Maybe my Paris flight will be delayed and I can miss the Easy Jet flight I’m supposed to take from Paris to Nice two hours after I land at 6:15 Tuesday morning. Yeah!

11 Comments
After The Fall

“I don’t know who I am,” former heavyweight champ Mike Tyson says to N.Y. Times contributor Tim Arango in a 5.11 piece about James Toback‘s Tyson, a pared-down but altogether touching doc that will show later this week in Cannes. “That might sound stupid,” Tyson continues. “I really have no idea. All my life I’ve been drinking and drugging and partying, and all of a sudden this comes to a stop.” 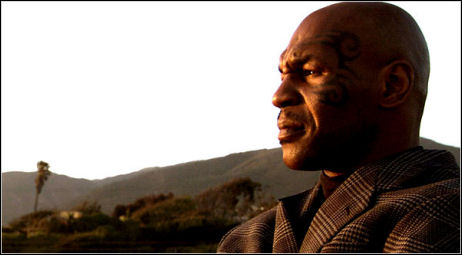 The line this most recalls, of course, is the one from Wim Wenders‘ The American Friend, spoken to Dennis Hopper‘s Tom Ripley character: “I know less and less about who I am, or who anyone else is.”

“I remember seeing Greenwich Village from seven feet up in the air growing up as a kid, because he’d have me on his shoulders and we’d be tripping around. And at a time before underground and independent film became a hot idea, then a dirty word, then a hot idea again as it is nowadays, my dad was making films that influenced a generation of filmmakers.'” — Robert Downey, Jr., speaking four days ago about his director dad, Robert Downey, Sr., at the “Time 100″ celebration at Lincoln Center.

This is an opportunity to pay tribute to “I can crawl again!” — my favorite line from Greaser’s Palace (’72), my all-time favorite Robert Downey, Sr. film. Every now and then that line comes to me and repeats in my head, over and over.
Here’s another great scene: 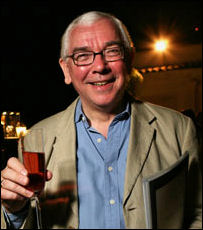 Articles by Maureen Dowd, Robert Novak and Bob Ray Sanders are saying either Barack Obama won’t ask Hillary Clinton to be his vice-presidential running mate, or would be wise not to.
Clinton’s loathsomeness has become the stuff of legend, yes, and her campaign since the start of the New Hampshire inning has colored her reputation for good. But sometimes in politics you have to hold your nose and make an accomodation with people who may be repugnant in some respects if they can provide what you need. John F. Kennedy didn’t pick Lyndon Johnson for vp because he loved the guy or admired everything about him. He picked him because he wanted to win.
Obama definitely needs the older, under-educated women who voted for Hillary. I’m not sure he needs (or has a chance to win over) the racist dolts, who will probably go for McCain anyway.
“So how does Obama repay Hillary for running a campaign designed both to unman him and brand him as an unelectable black? Is the most ingenious way to turn the screw by not choosing her as his running mate, or by choosing her?,” Dowd wonders. “It is, verily, a sticky wicket.”

Steven Soderbergh has been doing his frantic last-minute editing of Che at Post Works, a Soho facility on Varick. (“The best in the world for film and video post-production…no one compares. For real.” — Bob J.) A magazine editor told me over lunch a couple of days ago that he’s spoken to a Che guy who wonders if they’ll finish in time for the Cannes screening on Wednesday, 5.21.

It hit me yesterday afternoon that I had left my passport in my bureau drawer. My flight to Paris leaves Monday at 1:45 pm, so I called Fed Ex and was relieved to hear they could deliver it to my Brooklyn address no later than 8:30 am that morning. So I called the guy who’s staying in my place and left a message to please put the passport in an envelope with the Brooklyn address on it, and give it to a Fed Ex pick-up person who would be there between noon and 2 pm yesterday.
Except the guy didn’t get the message in time (his phone had a drained battery), and therefore had no idea what the Fed Ex guy wanted when he arrived at 12:30 pm. The apartment-sitter guy finally called around 4 pm Eastern and said he’d do what I asked. So I called Fed Ex back and asked if they could please send someone back to the house between 4 pm and 6 pm. They said they would. They didn’t.
The home guy waited until 9 pm Pacific to tell me that the passport hadn’t been picked up, which meant I wouldn’t be getting on tomorrow afternoon’s plane. Panicked, I searched around for an emergency courier service that could pick up on Sunday morning and deliver to NYC the same day or early Monday, but nothing was turning up. The Fed Ex people, who obviously owed me because of their negligence, were amazingly unhelpful. Three people I talked to refused to pass along a referral of any kind. As I pleaded with these bozos, I imagined them roasting over a spit in deepest hell.
I finally found an operation called Action Messenger and a good guy named Jamal, who said they could pick up the passport this morning and get it to JFK for pickup this evening for $275 bucks. I obviously didn’t like paying that, but what was I going to do? At least the issue is solved. Here’s to Jamal and the professional people everywhere who stand up and do the job. I’ll be getting on the A train to JFK around 6:30 this evening.

Yesterday my son Dylan and I visited my mom at an old folks’ home where she lives in Southbury, Connecticut. I’d been told by a nice woman who works for the facility that my mom, who’s been grieving since the recent death of her daughter Laura, was somewhat upset by the presence of her ashes, which she had been keeping in her bedroom closet. So Dylan and I resolved that we would take the remains down to the family plot in a cemetery in Wilton, Connecticut, where our family lived from ’64 to ’94, and surreptitiously bury them ourselves. 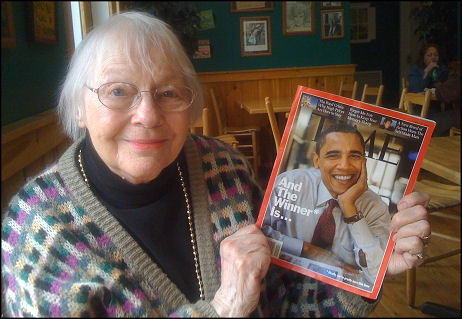 It seemed like the right thing to do. My sister had spoken more than once about the comfort she felt knowing that her final resting place would be alongside our parents, and it’s no big deal to deposit ashes in a piece of turf that’s been bought and paid for.
So after our visit my mom gave us a plastic bag containing Laura’s ashes, and Dylan and I drove south to Wilton. On the way there Dylan composed a beautiful prayer-eulogy on my i-Phone notepad. We borrowed a shovel from a friend who lives in Wilton, and drove into Hillside Cemetery to try and find the unmarked plot. My mom had told us it was about 10 or 12 paces south of where an old friend, Herb Gross, was buried. We asked a kindly older man who serves on the cemetery committee with Wilton’s Congregational Church to help us find Gross’s gravestone. It took us the better part of an hour to do so.
After the man drove off we went to the trunk and got out the bag and the shovel. Inside the bag we found a silver crucifix (my sister had bought it in Italy during a trip we took together in ’03) and a sweater jacket that my sister had bought for $10 dollars. (The price tag was still on it.) But we found no ashes. I called my mom with the news. She said she didn’t know where the ashes are. She’d just moved from a large apartment into a smaller living space, and had perhaps lost them in the shuffle. “I don’t care about the ashes that much,” she said. “It’s the spirit of her that counts…how we’ll remember her.” Of course, I said. You’re right, mom.
We returned the shovel to the friend’s house and caught the 7:37 train from Norwalk back to the city. This morning I read this Thomas Freidman column about Mothers’ Day, and it gave me a little pang.

Amy Poehler‘s delivery of the “my supporters are racist” line got the biggest laugh and even a little applause on last night’s SNL. The other two rationales: “I’m a sore loser” and “I have no ethical standards.” Not genius-level or even that funny, really, but who would argue this isn’t where Clinton is coming from? It’s easy, of course, to go with a spot like this now.

The Troma guys are claiming that weekend ticket sales for Poultrygeist, Night of The Chicken Dead tallied $12,000 for a single-screen showing at Manhattan’s Village East Theater. This is the highest per-screen haul of any film playing anywhere this weekend, they say. A press release says that Poultrygeist was called “a masterpiece!” by an Ain√É¬¢√¢‚Äö¬¨√¢‚Äû¬¢t It Cool poster, and that CHUD’s Jason Pollock has called it “the best film Troma’s ever produced, without a doubt.√É¬¢√¢‚Äö¬¨√Ç¬ù
I’m mentioning this because the Troma people have never made anything I’ve wanted to see — ever — and in part because I wrote a treatment and half of a script in the mid ’80s called Killer Chickens. The word “half” in the last sentence is one reason why I’m a columnist and not a screenwriter.