Politico‘s Jeffrey Ressner has found some conservative-minded types who have problems with Stefan Forbes‘ Boogieman, the recently screened Los Angeles Film Festival doc about Lee Atwater, the southern-born Republican opportunist and campaign attack dog who introduced pure unmitigated evil into the American political system by pushing negative images of his Republican clients based on race-baiting, divisive half-truths and flat-out lies.

Forbes’ film, trust me, is a fairly drawn portrait of an absolutely wretched and malicious scumbag, a Karl Rove-ian manipulator of the first order who sprinkled hate and slander like so much fertilizer, a guy who tried to apologize to victims of his evil spinnings on his deathbed out of fear he might go to hell. And yet he’s got defenders who are sticking up for him.
Republican political consultant Mike Murphy has told Ressner that the film is √É¬¢√¢‚Äö¬¨√Ö‚Äúa pejorative, liberal cartoon,√É¬¢√¢‚Äö¬¨√Ç¬ù and that the doc is guilty of “a greater assault on the truth than anything Lee Atwater was accused of.” My view of the film — √É¬¢√¢‚Äö¬¨√Ö‚Äúthe sharpest and fairest portrait of smear politics and Republican culture since So Goes the Nation, last year’s doc about the 2004 election” — is quoted in the piece. A third view comes from Breitbart.com’s Andrew Breitbart, who complains to Resser about “the director’s deft use of Joe Conason, Terry McAuliffe and Eric Alterman as objective voices to drive the narrative.”
Meaning that the film would work better if Forbes had spoken to more Atwater pallies and Republican apologists? Guess what? Such guys are heard from all through the film. This isn’t a one-sided doc, despite what Murphy and Breitbart will tell you.

Todd McCarthy‘s review of the 92 minute-long Hancock, posted today at 4:10 pm, is pretty much a flat-out pan. He calls it “an intriguing high concept undermined by low-grade dramaturgy,” adding that “this misguided attempt to wring a novel twist on the superhero genre has a certain whiff of Last Action Hero about it, with Will Smith playing an indestructible crime-buster in a pointedly real-world context. Although it will inevitably open very large, this odd and perplexing aspiring tentpole will provide a real test of Smith’s box office invincibility.” 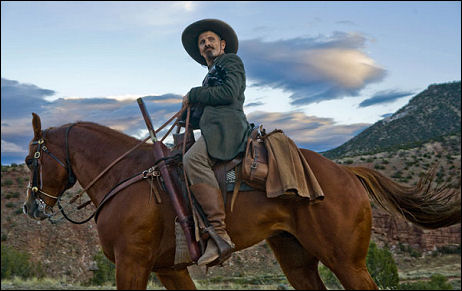 5:39 pm Update: Another guy has written in and said “It’s still a New Line movie, New Line execs are still doing the development/cutting, and New Line came up with the release plan. It’s a Warner Brothers movie like Sex and the City is a Warner Brothers movie — in that WB passed on it and New Line made it.”
The western is about two gunmen, a marshall named Virgil Cole (Harris) and his deputy and friend Everett Hitch (Mortensen) trying to free a town from its thrall to a thuggish rancher (Irons…I think). Zellweger plays a young widow who presumably falls for Harris or Mortenson or whatever. Appaloosa is Harris’ second film as a director, the first having been Pollock.
Check out the Appaloosa IMDB boards and you’ll see it’s gotten some good reviews from test screenings. Looks to me like an almost sure bet for the ’08 Toronto Film Festival. Mortensen has been a steady attender of that gathering in recent years. Now we have an outdoorsy adventure-ish Viggo Mortensen movie (a period western) set for release just over two months before the 11.26 opening of The Road, an adaptation of the Cormac McCarthy novel in which he also stars. 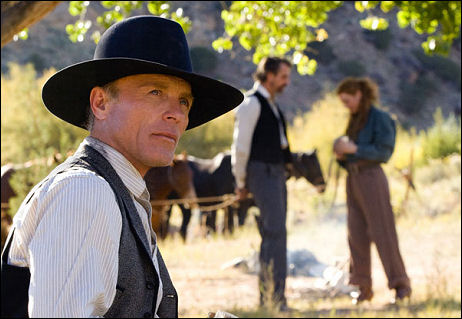 The new Times/Bloomberg poll, released an hour and three quarters ago, says Barack Obama is currently holding a 12-point lead over John McCain, 49% to 37%. Throw in Ralph Nader and Bob Barr and Obama holds 15-point edge. That 15 point lead Obama had in the recent Newsweek poll seems less eccentric now. Whites are evenly split between the two — 39% and 39%. 11% of former Clinton supporters (bitter) have gone over to McCain’s side.

A Dark Knight TV spot, posted only a day or two ago. I was speaking a little while ago to a friend about Mamma Mia and The Dark Knight opening against each other on 7.18, and the zero conflict levels given that “the audience for the former is older women and the latter older men.” Older men? Yes, he said. Knight is a moodier, more psychologically complex drama that will won’t be as naturally popular with the under-25s as, say, Iron Man was. Really? Younger males are going to be slightly hesitant about a big new Batman film costarring the late Heath Ledger? News to me.

I find the idea of on Howard’s Angels and Demons goosing tourism in Rome, as this Elisabetta Povoledo piece in the N.Y. Times suggests, incredibly banal. But that’s the American public for you. A more important thing to note is that Tom Hanks‘ Demon hair style has been trimmed back significantly from his DaVinci Code mullet of two years ago. 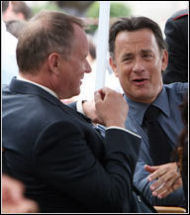 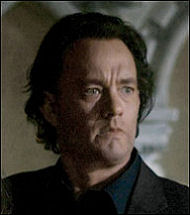 “Work in Hollywood has crawled to a near-halt in anticipation of a possible actor’s strike, green-lighting has dwindled to a trickle, and the creative community across the board is tightening its belt, seeing the dreaded signs reminiscent of the writers guild strike that just ended months ago,” writes Sharon Waxman on her “Waxword” blog in a piece that links to a 6.24 L.A. Times piece about this subject by Claudia Eller and Richard Verrier.
“Actors tell me there are precious few auditions going on, and writers and directors are embracing the ‘staycation’ instead of making plans to go to Europe. The Screen Actors Guild contract with Hollywood’s major studios expires at the end of this month, and few believe that there will be a resolution by that time. The secondary acting guild, the American Federation of Television and Radio Actors (AFTRA), has reached a new contract; its members need to vote on whether to stand with SAG or ratify the agreement. Will there be a strike? No one, but no one is in the mood.
“The membership will have to decide whether to follow in the footsteps of the writers guild, a standoff that caused tens of millions of dollars of economic dislocation, and resulted in extremely hard-to-define gains. Or they must choose to continue working without a contract, not a very strong position from which to bargain. Either way, the movie and tv producers continue to have disproportionate clout in this battle. They are preparing to wait it out and protect their bottom lines.”

“I was in my mother’s belly as she sat in the waiting room of the abortionist’s office. Dr. Sunshine was his code name. I was fifty feet from the drainpipe, and she saw a painting on the wall that reminded her of her mother, who had recently died. She took that as a sign to have the baby. That’s what I call luck.” — from an Esquire “What I’ve Learned” piece by George Carlin, edited/reported by Larry Getlen and posted (or re-posted) on 6.23.08.

In an interview with Christianity Today‘s Mark Moring, WALL*E director Andrew Stanton talks about how his Christian faith has informed his creative process at Pixar and the making of his latest film. You’d barely know from Moring’s side-stepping intro and Stanton’s many quotes that there’s a strong anti-corporate, beware-of-unbridled-consumerism, save-the-earth-before- it’s-too-late theology that runs all through WALL*E.
Pixar’s John Lasseter and his nervous-nelly lieutenants have clearly put the word out to downplay this aspect of the film out of fear that American Jabbas and other impulse consumers will avoid WALL*E if they get the idea that it’s some kind of lefty message flick that Al Gore would be proud to call his own.
I’m starting to feel vaguely offended, I must say, by a p.r. policy that’s totally fine with sucking up to Christian moviegoers (a conservative bunch that harbors a faction of global-warming deniers) but shilly-shallies away from acknowledging that a significant side of WALL*E is dealing with the most pressing and life-threatening issue of our time. Sorry, but there’s something a wee bit sickening about this.
Kids are going to get what they want to get out of this (cute robots, etc.) but the glory of the Pixar product is that it’s concurrently written for and angled to adults.

Bouncing off yesterday’s October Surprise piece, a two-day-old clip from “Fox News Sunday” with Weekly Standard editor, NY. Times columnist and rabid neocon Bill Kristol implying that Bush “is more likely to attack Iran before leaving office if he believes Obama is going to win the election because he is confident that McCain will continue his Iran policy for a third term,” etc.

By far the best “Make McCain Exciting” video of them all, submitted yesterday to the Colbert Report by the brilliant “Wayne S.”

“You could certainly say that George Carlin downright invented modern American stand-up comedy in many ways,” writes Jerry Seinfeld has written in today’s 6.24 N.Y. Times. “Every comedian does a little George. I couldn’t even count the number of times I’ve been standing around with some comedians and someone talks about some idea for a joke and another comedian would say, ‘Carlin does it.’ I’ve heard it my whole career: ‘Carlin does it,’ ‘Carlin already did it,’ ‘Carlin did it eight years ago.’
“And he didn’t just ‘do’ it. He worked over an idea like a diamond cutter with facets and angles and refractions of light. He made you sorry you ever thought you wanted to be a comedian. He was like a train hobo with a chicken bone. When he was done there was nothing left for anybody.
“I became obsessed with him in the ’60s. As a kid it seemed like the whole world was funny because of George Carlin. His performing voice, even laced with profanity, always sounded as if he were trying to amuse a child. It was like the naughtiest, most fun grown-up you ever met was reading you a bedtime story. Everything he did just had this gleaming wonderful precision and originality.
“I know George didn’t believe in heaven or hell. Like death, they were just more comedy premises. And it just makes me even sadder to think that when I reach my own end, whatever tumbling cataclysmic vortex of existence I’m spinning through, in that moment I will still have to think, ‘Carlin already did it.'”