Apologies to readers for the periodic slow loadings experienced earlier this afternoon. I’ve taken measures that will alleviate the problem. The first is the loading of extra RAM tomorrow morning around 8:20 am tomorrow morning, which will result in a shutdown for about 10 minutes. The second will take effect about four or five days from now.

I wouldn’t have noticed this You Tube clip if In Contention‘s Kris Tapley hadn’t put it up earlier this morning first. 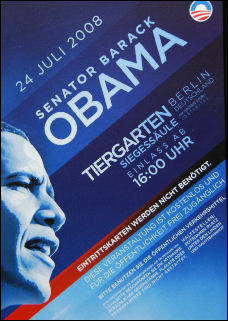 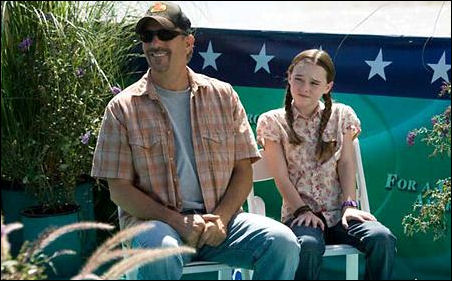 What’s the difference between “walking back” on a quote and “backpedaling”? Is there one? I have this notion that the latter sounds a bit more urgent or frantic. But maybe not. 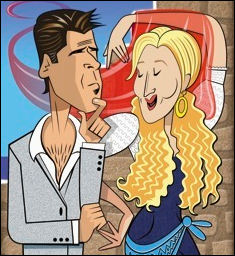 Young Turks’ Cenk Uygur on Crawford is/was a prop, Bush doesn’t have the first clue, “Wall Street got drunk, needs to sober up,” etc. The best part is a lecture to shitkicker voters, at the very end: Wealthy Republicans “are screwing you and having a great time doing it.”

Ben Stiller‘s Tropic Thunder (Dreamamount, 8.13) , which I saw three months ago, is an escaped-from-Bedlam, bong-hit, National Lampoon-level (the ’70s magazine, not the movies) Hollywood satire of (a) itself and (b) various Vietnam War movies we’ve all savored, particularly Platoon and Apocalypse Now. Except it’s not as low as it sounds. The tone is informed by the filmmaker characters, all of whom are clever jerks of one kind of another. Nobody’s a complete idiot. 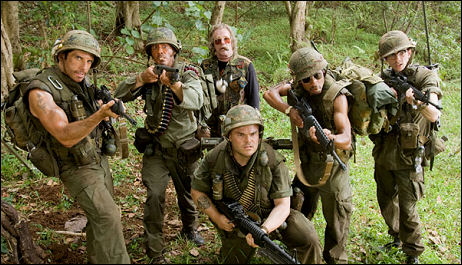 The laughs stem from a rollicking, toking-up-with-the-guys attitude that gets sillier, wilder and more surreal by the page. And it’s a people’s comedy in that uncouth types will love it but so will those with a little education and refinement as long as they’ve gotten high at some point in the past, or have it in them to get the drug-humor thing.
That sounds like a ceiling, doesn’t it? Conventional wisdom says that satire only travels so far, and drug-humor movies never get past $60 or $70 million. Well, Tropic Thunder has something else in the engine, a kind of manic propulsion element that really hellzapops.
On top of which acid-tinged humor is a tonally appropriate way to go for a movie about making a movie about the U.S. of A’s first and only psychedelic war. It’s basically about a self-absorbed asshole movie star (Stiller) who’s career is downspiralling, and who has taken a role in a Vietnam movie that’s being shot in…I forget precisely but somewhere in Southeast Asia. And of course, all hell breaks loose at the end of the first act.
Speedman’s costars are Jack Black‘s “Portnoy” and Robert Downey, Jr.’s “Kirk Lazarus,” among others. The director is played by crazy Steve Coogan. The technical advisor is a flipped-out Vietnam vet played by Nick Nolte. Matthew McConaughey (great casting!) plays Speedman’s slithering, soul-less agent, and Tom Cruise — best thing he’s done in years — plays a potty-mouthed pit-bull mogul who runs the studio that’s funding the film. 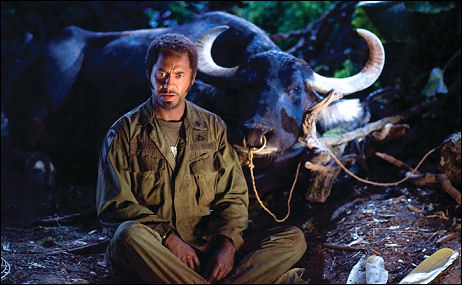 The story is about what happens when the cast goes out in to the wilds of the jungle in order to feel the fear and acquire the thousand-yard stare, and real life intrudes in the form of a Golden Triangle drug-dealing gang.
Two hours after I saw Tropic Thunder last April, breathless and still charged, I called it “the most psychedelically deranged Vietnam-War-movie comedy of all time.” That still sounds like an okay way to put it. I remember saying to myself as I sat in the Sherry Lansing theatre, “I feel like I’m on something….what would this movie be like if I was?” But every inspired comedy feels like you or the actors have dropped at least a half-tab of something. That’s what Some Like It Hot feels like, for sure. Ditto A Night at the Opera, The Big Lebowski, Superbad, etc.
I wish I did still turn on (I haven’t smoked anything since the mid ’70s) because I’d love to get wasted before re-seeing Downey’s performance as a talented but pretentious actor playing a “black guy,” complete with an Isaac Hayes street accent and a special pigmentation makeover.
Stiller, who’s directed and co-written the script (with Justin Theroux and Etan Cohen), has been trying to make this film for years. Here’s a salute to not just Stiller but all tenacious filmmakers — great ideas are nothing if you don’t have the balls to keep pushing. This film is Stiller’s best work since the hey-hey days of The Ben Stiller Show, and his best idea since the Al Pacino-auditions-for-Beethoven bit. 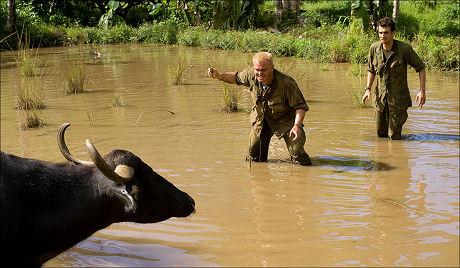 It also feels to me like an Oscar-level thing for Downey. I know — who gives a hoot about Oscar nominations when a film is this funny? But Downey is amazing in this. This plus Iron Man — what a year for the guy. The Best Supporting Actor race is already down to Downey vs. Ledger.
One of the most successful performances by Stiller’s Speedman was a retarded Jack character, and one of Tropic Thunder‘s trippiest moments is when Stiller re-performs Jack in front of the heroin-dealing gang. I love that Speedman never “wakes up” — start to finish, he’s in a movie of one kind or another.
At least Cruise has one thing he can point to this year with pride and joy, even with Valkyrie‘s myriad issues. (I wonder, by the way, how The Hardy Men — a Stiller-Cruise comedy — is progressing?)
Is there a difference between humor that you know is funny as hell but you do’;t laugh at, and the kind that you do? I suppose, but for me, Tropic Thunder was a half-and-halfer in this regard. And that’s totally fine.

Martin Scorsese‘s Shine a Light opened only three and a half months ago. I’d convinced my significant other to come see the IMAX version with me, and she had half-convinced her daughter to come with us. But it didn’t happen and the film left the IMAX theatres and now the opportunity is gone for the rest of our lives on this planet. Next Tuesday’s arrival of the Shine a Light Blu-ray disc reminded me of that. 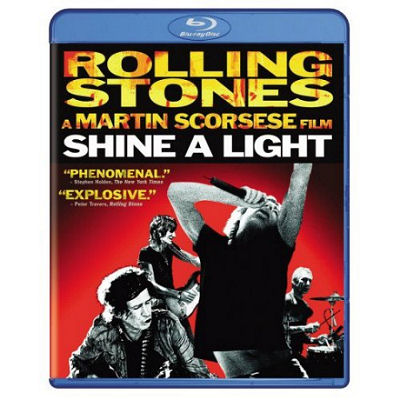 “Everything Is Cinema is important because it is an honest, intelligent and often eloquent treatment of a major motion picture artist [i.e., Jean-Luc Godard]. Sometimes reading it is a bit like riding a train that is chugging dutifully up a hill; at other times it’s a roller coaster of exciting ideas. Either way, like a Godard film, the journey turns out to be worth it.” — from Jeanine Basinger‘s 7.23 N.Y. Times review. Wait…the book came out two months ago (on 5.13)?