Wait…Variety‘s Todd McCarthy has panned Tropic Thunder? Something is funny or it isn’t, but wow…what a gulf. One man’s comedic delight is another’s torture chamber.

A geek dad in a monster outfit hanging with a toddler…right. A variation on the generic Comic-Con photo that runs in the N.Y. Times each and every year. I’m not putting the practice down. I would run this photo (or one like it) if I’d been asked to decide which photo would best go with this Michael Ceiply story about Frank Miller talking about directing The Spirit, which we all know will be trotting out the same Frank Miller routine — high-style CG noir mixed with tough talk, slinky dames and ripe sensuality. 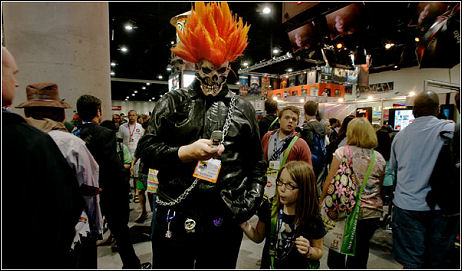 I shared an observation about four or five years ago that I’m now going to repeat, to wit: this is one of the best movie endings of all time — right at the top of the list, I’d say. It’s great and mythic because (a) it explains exactly what the film has been about (i.e., the spreading U.S. paranoia about commies, UFOs and other usurpers of the American dream) without getting preachy, and (b) strongly hints that the worst of the bad stuff is yet to come. And then that hard-slamming Dimitri Tiomkin brass…brilliant!

The brilliant, avant-garde-ish Darren Aronofsky doing a Robocop film? Good God. The sensitive New York director of the brilliant Pi, the intensely druggy and degenerative Requiem for a Dream and the trippy-mystical The Fountain? Lo, how the mighty and gifted have fallen. Wait…The Wrestler with Mickey Rourke?
On the other hand there’s the relatively recent reality of Aronofsky becoming a dad, and the likelihood of his not wanting to be seen as the esoteric guy whose films don’t play to the mongrel popcorn crowd, and so what the hell…he takes a straight paycheck gig. The upside is that this will be the brainiest Robocop ever. The fact David Self (Thirteen Days, Road to Perdition) is doing the screenplay indicates something non-cheesy.

Big Picture columnist Patrick Goldstein has missed the big picture in his 7.25 article about screenwriter Peter Morgan‘s third and presumably final Tony Blair movie, the first two being The Deal and The Queen. Goldstein said that Morgan “envisions the script,” called The Special Relationship, as “an intimate portrait of Blair’s relationship with Clinton, circa 1997-2000.”

Well and good, but what Goldstein doesn’t mention is that the script was first envisioned as a tragic tale of Blair’s downfall due to his misguided alliance with Bush over WMDs and the mounting of the Iraq War. Michael Sheen, who portrayed Blair in The Deal and The Queen, told me in the spring of ’07 about Morgan’s plan to eventually write a Blair-goes-down movie (and about his expectation that he would star in it).
On 10.1.07 Variety‘s Adam Dawtrey reported that the new movie will focus on Blair’s “reaction to the handover of power from Clinton, a natural liberal ally, to Bush, who came from the other end of the political spectrum, which Morgan sees as a pivotal moment when the special relationship between Britain and America changed.'”
What’s happened, in short, is that Morgan has gradually lost interest in the Bush-alliance downfall story and shifted focus to the lah-dee-dah Blair-Clinton relationship. It’s almost certain that whatever A Special Relationship turns out to be, Morgan will make it work and then some. He’s a very sharp writer. But I for one am disappointed. The Iraq War-downfall thing is about a smart guy going astray, drinking the Kool-Aid and screwing his career — clear and simple. What’s the Bush-Clinton story about? Two liberal-minded heads of state come to like each other during the ’90s and….what? I don’t see what it is.