John McCain‘s decision to cancel his appearance on the Larry King show Tuesday night was, if you ask me, another show of questionable judgment and hair-trigger temperament. He and his lieutenants reportedly became enraged over Campbell Brown‘s tough interview about Sarah Palin with McCain spokesperson Tucker Bounds, and decided to blow off the King appearance as a kind of “fuck you” to CNN.

“As a presidential campaign, we reserve the right to adjust Senator McCain’s media schedule in order to ensure the most effective use of his time,” said Maria Comella, a McCain spokeswoman. “After a relentless refusal by certain on-air reporters to come to terms with John McCain’s selection of Alaska’s sitting governor as our party’s nominee for vice president, we decided John McCain’s time would be better served elsewhere.”
McCain is obviously getting extremely prickly about all the water that Palin has been taking on, and is looking to turn things around before the worst-case- scenario (from the McCain perspective) comes to pass.

Variety‘s Anne Thompson speaking a couple of days ago with Slumdog Millionaire director Danny Boyle in Telluride. I presume Anne was shooting as she spoke and vice versa, but I could’ve done without the gentle wiggle-sway effect. And what about that finger?

Producer Jerry Weintraub wanted Guillermo Del Toro to direct a Tarzan movie (which I could see if GDT was allowed to be imaginative), but The Hobbit project got in the way of that. So Weintraub has, I’m told, reached out and found a director who knows from mummies and vampires and colliding worlds to take over the reins. Tarzan, meet…Steven Sommers!

The calls and the homework will have to wait since I have to be at a screening of The Women at 7:30, but the rights to make a fact-based, Born Free-like film about a lion named Christian who was born and raised in London for a year (from 1969 to ’70) and was then introduced to the wilds of Africa was recently bid upon by three studios — and Columbia triumphed, I’m told, with Neil Moritz (Vantage Point, The Green Hornet) slated to produce.

Read the Wikipedia page about Christian, and then watch the video above (and try to ignore the godawful music track). The affection is obviously real. How can this not work? Even I would see it and probably like it. If it isn’t overly sweetened and sentimentalized, that is.

Is Barack Obama‘s new 50%-to-42% lead over John McCain (which marks the first time BHO has hit five-oh) a Sarah Pailin-is-a-joke bump, a McCain’s judgment-is-definitely-in-question bump, or…? Or is it too soon for the Palin thing to have taken effect with the flyovers?

Were there any journalists, producers or distributors aboard American Airlines #1586 late this morning, which got into trouble as it took off from LAX for Toronto? A landing tire went “kapow!” just as the jet was leaving the tarmac, so the captain circled over Los Angeles, dumped fuel near Catalina Island and came back to LAX for an emergency landing. 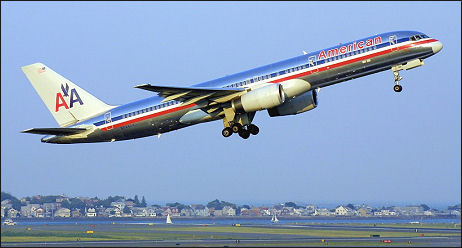 If anyone who reads this column was on-board (or knows someone who was on-board), please regale with your hair-raising experience.
I’m leaving tomorrow around 12:30 pm on Air Canada, so HE will be on blackout for about five or six hours.

Just another digressive cat item, but I’m curious whether other cat owners have ever had a mouthwash moment. Three or four times over the last two days I’ve nuzzled Mouse, my four-month-old Siamese male, after brushing with a mint-flavored toothpaste and gargling with Scope, and each time Mouse has gotten instantly aroused and started licking my lips. Cats tend to like bland human food — chicken, cheese, yogurt, vanilla ice cream, etc. I’ve never heard of any cat ever liking the taste of mint mouthwash, or mint anything. Now I’m starting to wonder if I should get him some chocolate chip mint ice cream for an occasional dessert.

I presume The Envelope‘s Pete Hammond wasn’t referring to yours truly when he attacked “voracious movie bloggers [who] took shots” at David Fincher‘s The Curious Case of Benjamin Button “on the basis of last weekend’s modest Telluride peek” at 20 minutes of footage.
“They would be advised,” Hammond said, “to hold their reviews a few months until the other 2 hours and 25 minutes can be seen.”
Yeah, I reported some downbuzzy stuff (as did an i-Film correspondent and Cinematical‘s Kim Voynar), but I did so with qualms and caveat emptors.
I passed along what I’d been told with “displeasure and irritation,” and said that “I didn’t like hearing this…because I’m a fan of Eric Roth‘s script as well as an overall Fincher fan, [and] so I started arguing with [my sources]. What were people looking for? I asked. What is it that people wanted to happen? It’s just a reel, a taste of a feature film.”
Hammond writes that “despite the doubters, one key studio honcho (and academy member) not connected with the film told us on the basis of what he saw and his personal knowledge of Eric Roth‘s (Forrest Gump) script that he thinks Benjamin Button is easily the one to beat for best picture.”
The Envelope‘s Tom O’Neil posted his own piece about the Telluride Button reactions (and counter-reactions) earlier this afternoon.

Forget about Russell Crowe playing Dr. Watson to Robert Downey, Jr.‘s Sherlock Holmes in the Warner Bros./Guy Ritchie flick being prepared. An agency guy just called me to report that Crowe has passed.

The legendary Don LaFontaine, the movie-trailer announcer guy who laughed harder than anyone else at the whorey cliches he was paid to repeat hundreds if not thousands of times over the past 33 years (led by the all-time groaner “in a world where…”), died yesterday at age 68. Good God. It’s like a trapdoor opened and he just fell through it. I’m terribly sorry for his family and friends. And for Don also, of course. I bet he’s pissed about this. I sure would be.

I knew Don slightly. I first met him in ’95 or thereabouts when i interviewed him for my L.A. Times Syndicate column. I then came to know him socially through Cedering Fox over the past couple of years. A good man, quite the wit, always laughed at himself, always with the grin.
And The Winner Is blogger Scott Feinstein has written a short tribute to Don, which includes the audio of a 40 minute interview LaFontaine granted two years ago, as well as clips of a self-parodying video that he and four colleagues shot a decade ago (which has since became a YouTube sensation) and his recent GEICO commercial.

The new Vanity Fair has published an exhaustive photo article aimed at Marilyn Monroe obsessives called “The Marilyn Files.” It’s basically the contents of two filing cabinets — letters, invoices, financial records, mementos, minutae — that chart the story of her life. Photographer Mark Anderson took two years to photograph all this stuff. Presumably he and whomever owns the material are looking to cash in at Sotheby’s. 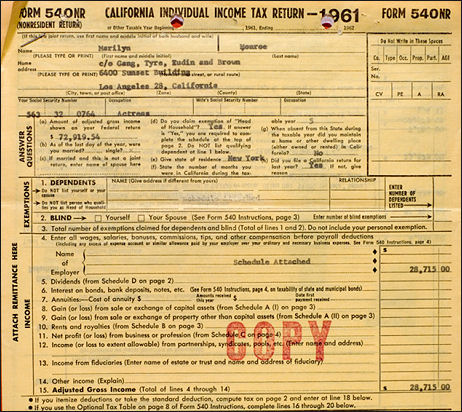 Behold — Marilyn Monroe’s
1961 IRS tax form. An income of $28 grand and change during the first year of the Kennedy administration wasn’t too shabby as long as you didn’t go nuts, but it wasn’t that flush either, especially for a movie star. Here’s an expense list for that period.
September 2, 2008 12:07 pmby Jeffrey Wells