I just want to leave Toronto and go home and lock the door and forget about everything except filing and playing with my cats. My beautiful black Canon camera ($400) was stolen by three young apes today at an internet cafe. I should have listened to my instincts. I could smell their anarchic stink. They looked like animals and I ignored this obvious fact. I went to the bathroom while they were sitting next to me and they made their play.
It was my fault entirely. I let it happen. When feral types congregate nearby, you grim up and protect your stuff. Can I join the conservative club now?
Plus they stole my iPhone. Total loss — $600 dollars and change. For whatever reason they didn’t steal the wide-angle lens that I used for the camera with certain shots. Could that be because they’re stupid, or that they lack nerve? If I had a large baseball bat and could be granted a magical encounter with these guys in some Toronto back alley….

Gallup has McCain-Palin up three points over Obama-Biden, 48 to 45, and Zogby has them ahead as well, 49.7% to Obama-Biden’s 45.9%. A standard convention bounce, of course, but still…my God. The writing on the wall couldn’t be clearer, especially as it reflects upon McCain’s rash judgment over the Palin pick, and a lot of the fence-sitting heartlanders are still favorably impressed.

Call this one definitely better (and certainly more smoothly shot and cut) than Clerks II, heads and shoulders above Jersey Girl, a bit funnier than Jay and Silent Bob Strike Back, livelier and more entertaining that Dogma, almost as intimate and touching as Chasing Amy, much better than Mallrats and not as good as the original Clerks.
Within his familiar smart-but-easygoing-schlub persona, Rogen is on a roll these days, incapable of seeming rote or insincere, and he punches up the energy and aliveness in a way that’s obvious and ummistakable. And Banks matches him note for note with a game receptivity and good humor. As I was walking out, a journalist friend said, “Smith should thank God for Judd Apatow and Seth Rogen,” meaning that Smith is sorta kinda riding their coattails with this film, albeit in a way that bears his own ethos and sensibility.
Zack and Miri grooves right along in a good-natured, “let’s relax and be cool about being blunt and more than a little gross” sort of way.
It’s basically about the financially-strapped Zack (Rogen) and Miri (Banks), sharers of a ramshackle pad in funky Monroeville (a suburb of Pittsburgh where George Romero has shot two or three of his zombie movies), realizing that internet porn is a not-too-difficult way to raise quick cash, and giving it a try with no production money, a cheap video camera and a few friends as costars and assistants. 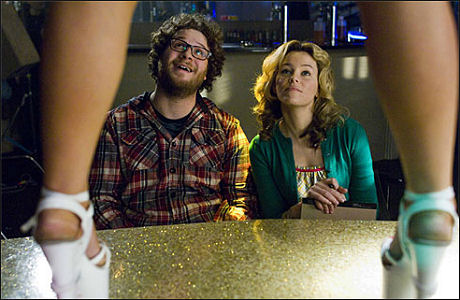 It struck me as a little bit weird that the sex scenes are shot with a static camera sitting on a tripod each and every time. Hand-held photography is obviously the way to go with films of this sort — get in there, get close, get it all, etc. But then none of Smith’s films have been shot with a loosey-goosey hand-held approach — visually he’s always been a very formal, almost rigid, director — so I guess it does sort of make sense.
It’s obvious that Zack’s scripting the sex scenes so that Miri won’t “do” anyone other than himsefl on-camera, and Miri being distinctly unsettled when Zack is offered an easy roll in the sack with one of the pic’s female costars, that they care deeply for each other.
Zack also experiences a creative awakening in shooting home-style porn, which gives a lift to his overall attitude and self-image. But the penultimate moment comes when he and Miri finally perform the deed on-camera, and their cohorts (and the audience, of course) realize it’s not much of an acrobatic, look-at-us! performance for all the right reasons.
It’s unrealistic, of course, that a hottie like Banks would be attracted to a schlubby guy like Rogen (unless we’re talking about the real-life Rogen, which is a whole different deal because then you’re talking a guy who’s bright, funny, famous and rich). But then Apatow has been pulling this fantasy crap in film after film, and now Smith (another rich, brilliant, super-successful geek with a weight issue) has picked up the torch.
In the real trenches of the real world, average overweight geeks do not schtup beautiful blondes with radiant ruby eyes, exquisite facial structure and perfect white teeth — end of story, end of proposition, total dreamworld. But the fact that this doesn’t get in the way of enjoying Smith’s film says something. To me anyway.
Mistake: At the end of Zack and Miri’s sex-on-camera scene Banks sits up and starts collecting herself — we’re talking seconds after Rogen has dismounted — and we see that she’s wearing jeans. Now how did that happen?

It’s 1:55 pm, I have about two hours left before my next event, and I haven’t posted any kind of reaction to at least eight films now. I’m starting to feel like an air-traffic controller dealing with more and more jets circling above and the caffeine anxiety starting to really build up. Not to mention the other eight to ten more flicks I’ll be seeing and responding to Monday through Thursday before heading home on Friday afternoon.
The un-assessed films are (a) Danny Boyle‘s initially bothersome but finally superb Slumdog Millionaire (which I took two hours to review yesterday but lost due to online access shutting off before I was able to save it); (b) Bill Maher and Larry Charles‘ Religulous, which I saw and mostly liked (with reservations) in Los Angeles; (c) Jonathan Demme‘s partly inspired, partly problematic Rachel Getting Married (also seen in L.A.); (d) Andreas Dresen‘s surprisingly touching Cloud 9 (which I saw here last Thursday), (e) Claire Denis‘ low-key but precise and absorbing 35 Rhums (ditto), (f) David Koepp‘s Ghost Town (ditto), a playful mainstream studio wanker that has no business being in Toronto, really, except to satisfy the ambitions of its distributor, Paramount Pictures; (g) Matteo Garone‘s savage, inescapably “real” Gamorrah, (h) Guillermo Arriaga‘s The Burning Plain, a layered and well-acted adult drama that doesn’t really hit the mark; or at least isn’t on the same plane as the Innaritu-directed films based on Arriaga scripts (h) Kevin Smith‘s Zack and Miri Make a Pormo, which I just saw this morning.
I’m not going to catch up. All my advance homework, hard work and dogged attempts to see everything I should see have come to naught. It’s all collapsing into a heap. I just decided to blow off the Kevin Smith Zack and Miri press conference — that will buy me an extra couple of hours.

It’s official — for some incomprehensible reason (and yet linked, I suspect, to yesterday’s computer mishegoss), I can’t access my server on my primary laptop. I can go online in any internet cafe in Kabul, Berlin or Mendocino and access it, but my 17-inch Gateway is blocked from doing so. So I’m forced today to make this i-klick cafe on Yonge and St. Joseph my office for the next few hours. 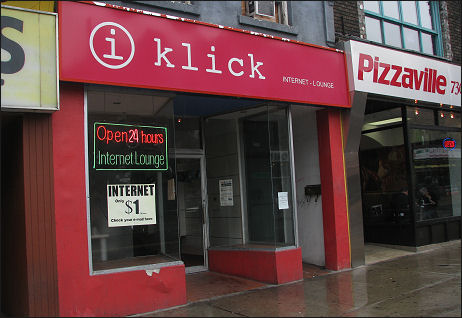 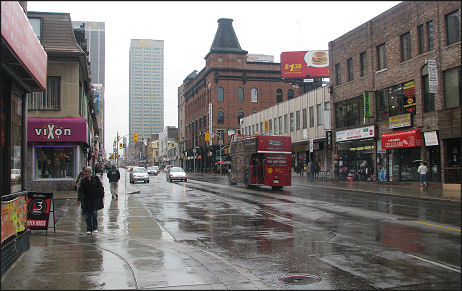 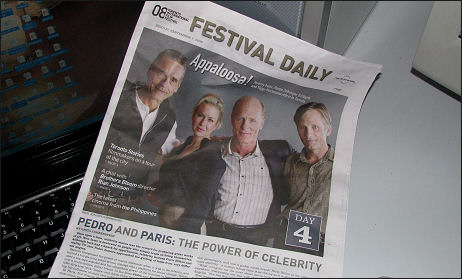 A New York-based journalist told me two days ago that Magnolia Pictures, the theatrical arm of Mark Cuban‘s 2929 corporation, has acquired U.S. distribution rights to Steven Soderbergh‘s Che, and that “they’re moving ahead with a fall release and are making bookings right now.” (He also said something about Che being “booked into the Zeigfeld,” but that’s apparently a New York Film Festival thing.) Okay, I said to myself. Sounds plausible. But when I asked indie distribution execs Bingham Ray, Jonathan Sehring and M.J. Peckos if they’ve heard anything about this, they all said no.

The problem with the diminishing indie-film marketplace, in the view of N.Y. Times critic A.O. Scott, is “not that there are too many [interesting art-house] movies, but that there are too few of us.” Precisely. For every impassioned fan of Ballast, Che or even The Hurt Locker, there are probably 40 or 50 popcorn-munching, attention-deficit-disordered fans of Beverly Hills Chihuahua. We live in a society that has devolved from what it once was in terms of interest in adult offbeat cinema. The U.S. of A. is a less educated, fatter, fast-foodier and less curious culture than it used to be, and it’s devolving more and more each year. Mainstream media critics and reporters all realize this, of course, but they’re not supposed to…you know, say it, and so guys like Scott go into their circumspect tap dances when the subject comes up.

In a piece that considers the meaning of Hollywood recently pulling the plug on some of the “dependents” (Paramount Vantage, Warner Independent, Picturehouse), N.Y. Times critic Manohla Dargis basically says all this implosion isn’t such a bad thing because it’ll give films like Ballast a better shot at reaching audiences. Here’s how she puts it:
“If all the studios followed the lead of Time Warner and got out of the indie film business, it might help a film like Lance Hammer‘s Ballast find its way into the larger world, though that’s no guarantee. And perhaps that’s the wrong way to look at it.
“Guarantees are for washing machines, after all, not art, and films like Ballast and Wendy and Lucy don’t need big distributors, a mass audience or a Spirit Award to prove their worth. Like the finest independents, they aren’t trying to emulate Hollywood, and while Michelle Williams has the lead role in Wendy and Lucy, it isn’t the kind of film that can be sold on a starlet’s smile. Like Ballast it will make its way into theaters, where it will be much loved and remembered long after it leaves.”
Ballast, which Hammer will be self-distributing, is no “audience film,” trust me. It’s a Robert Koehler-Manohla Dargis-Jim Hoberman-Scott Foundas film. I can’t imagine any viewer not feeling a good amount of respect for the earnest and unaffected acting, the pared-down austerity and authentic Tobacco Road vibe, but it moves very, very slowly — the word is actually “glacially” — and is not, by my standards, a film that wins you over as much as one that convinces you to speak well of it lest you be thought unhip by Robert Koehler, Manohla Dargis, Jim Hoberman or Scott Foundas.