It wouldn’t have worked with undecided voters, but frustrated Barack Obama supporters like myself would have felt immensely satisfied if he’d shown a little steel last night and told John McCain to wipe that smirk off his face because… you know, there was nothing the least bit funny or amusing about what they were discussing.

I’m thinking, of course, of that delicious moment in Michael Mann‘s The Insider when Bruce McGill tells Wings Hauser to do just that in that Mississippi courtroom.

The best thing about Last Chance Harvey (Overture, 12.26), a mature romantic drama with Dustin Hoffman and Emma Thompson, is the title, which seems to say it all in three words. But read the synopsis on this Movie Jungle page and tell me what it tells you. I think it sounds a little forced, a little twee. Like someone’s trying to sell something. 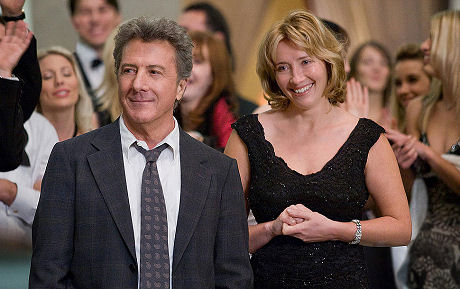 In any case, The Envelope‘s Pete Hammond reported last night that it’s coming out on 12.26 rather than 1.23 because Hoffman “is said to be terrific in the role of a rumpled man who finds love when he travels to London for his daughter’s wedding.”
Will this split Overture’s time and expenditures as far their push for Best Actor contender Richard Jenkins, star of last spring’s surprise art house hit, The Visitor?

There isn’t a lot of Paul Newman in these clips from George Roy Hill‘s Slap Shot — just two locker-room pep talks — but he and the Hanson brothers (i.e., the Carlson brothers) were beautiful in this thing. In the second clip, the riled-up referee’s reaction during the playing of the national anthem is perfect — two turn-arounds and a confrontation. “I’m listening’ to the fuckin’ song!” That settles it — I’m buying the DVD later today.

I’m too lazy to have bought or rented the BBC series Life on Mars, about a present-tense cop finding himself time-transported back to 1973. But it has a relatively good rep. Which is why an American version of this series will debut on ABC on 10.9 with Jason O’Mara as the time-traveller and Harvey Keitel as his older, grizzled partner.

If you research it, indications pile up that the ABC version may turn out to be on the trite or mediocre side.
One, jokes about the differences between the two time periods appear to be on the level of the same type of material in the first Back to the Future, and this kind of thing can get old very quickly.
Two, TV.com reports that O’Mara’s character “ends up working on a case involving a serial killer that may have something to do with his girlfriend’s kidnapping in the present time,” and there’s a line in the ABC promo reel in which a female colleague says to O’Mara that “maybe you’re here for a reason” — kiss of death!
And three, David E. Kelley wrote and executive produced the Life on Mars pilot, and yet the N.Y. Times has reported that Kelley “has handed over the production responsibilities to others.” Wikipedia reports that ABC ordered an overhaul in which the “unsatisfying” ambiguity of Sam’s story was removed in favor of a “mythological element” and “deeper mystery”. In other words, it’s probably been downgraded or dumbed-down.

Seriously — this guy is Ironman. And a perfect Herzog hero. First-rate Jetman footage of his flights (a high-quality mini-digital camera strapped to his helmet) would be awesome. All right, the German newscaster is what made me think of Herzog initially, but this is an idea that gets better and better the more you think about it. A great doc waiting to happen.

Earlier today: Thanks to HE reader George Prager for spotting the portion of last night’s debate in which McCain said “horseshit” twice. I’ve listened to this MSNBC clip over ten times now and there doesn’t seem to be any question about it. The first “horseshit” happens at 4:31, Obama says “Spain is a NATO ally” and the second “horseshit” is spoken right on top of this, just before 4:33. I’ve recorded it and copied it four times in this mp3 clip, but the video sound — naturally, being a generation closer — is more distinct.
The “horseshit” observation originally came from Andrew Sullivan, who has since backed off and is allowing that McCain may have actually said “course not.” Listen to the clip again — the second syllable of McCain doesn’t have a “not” sound. The difference between “shit” and “not” is fairly distinct.

College Humor’s Palin-Disney trailer, inspired by Matt Damon, is a good moderate chuckle and way above average for this sort of effort.

Awards Daily‘s Sasha Stone was the first to post a report of Paul Newman‘s death last night, but the source seemed a wee bit dicey and I decided to wait until this morning. But just to run it down I called Newman’s biographer-in-progress Shawn Levy — he was uncertain also. And very sleepy. (And so was I.)

Now the news is confirmed. Frank Galvin, Hud Bannon, Henry Gondorff, Cool Hand Luke, Rocky Graziano, Butch Cassidy, Reggie Dunlop, Lew Harper and Eddie Felson have left the room for good. We’ve all known it was coming for months, but there’s something about the finality or, as Bob Dylan once put it, the honesty of death that seeps right into your bloodstream at times, depending on how well you knew the departed and how much you cared and valued his or her presence.
I was very closely acquainted with Paul Newman. He was kin. I felt I knew him as well if not better than my own blood. I knew and cared for him as much as I knew and cared for John Lennon, Cary Grant and the 1950-to-1972 version of Marlon Brando.
The passing of someone close always brings shock and hurt, regardless of forewarning. It’s also scary and sad but there’s no stopping it and we’re all gonna get there — no exceptions. But a life well lived is its own reward, day by day, and not just for the captain of that life but everyone he/she comes into contact with along the way. 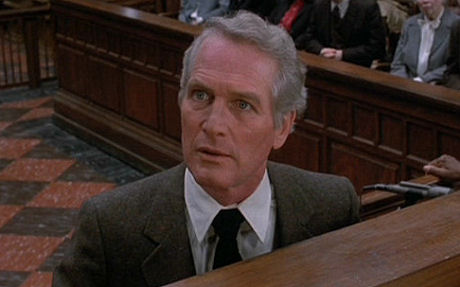 All hail the heart and mind that went into the creation of Newman’s Own. And to the spirit behind Newman’s winning lead performance as the bruised but good-natured Reggie in George Roy Hill‘s Slap Shot — perhaps my favorite Newman guy of all.
To quote from Aljean Harmetz‘s obit in the N.Y. Times, which quotes Pauline Kael: “When a role is right for him, he’s peerless. Newman is most comfortable in a role when it isn’t scaled heroically; even when he plays a bastard, he’s not a big bastard — only a callow, selfish one, like Hud. He can play what he’s not — a dumb lout. But you don’t believe it when he plays someone perverse or vicious, and the older he gets and the better you know him, the less you believe it.
“His likableness is infectious; nobody should ever be asked not to like Paul Newman.”

I’m looking to launch HE’s own Oscar handicapper feature this year. I’m thinking of calling it the HE Badass Brigade. Maybe the HE Oscar Badasses would be better. Starting on 10.15 and moving forward from then on. I’m looking to get as many filmmakers to participate as I can. Ones who don’t have a dog in the hunt, I mean. Plus screenwriters, studio guys, agents…along with the usual journo-critics.