Support on Patreon Follow @wellshwood
16 Comments
Defeat the “Other”

Atlantic political blogger Marc Ambinder has provided a transcript and mp3 file of an invocation spoken by a pastor named Arnold Conrad this morning in Davenport, Iowa, prior to a speech given by Sen. John McCain. McCain repudiated Conrad’s words when he got to the lecturn.
As Ambinder writes, “This pastor sees the election as a religious war. Either that, or Bill Maher paid him to promote Religulous.”
Here’s the transcript: “I also would also pray, Lord, that your reputation is involved in all that happens between now and November, because there are millions of people around this world praying to their god — whether it’s Hindu, Buddha, Allah — that his opponent wins, for a variety of reasons. And Lord, I pray that you will guard your own reputation, because they’re going to think that their God is bigger than you, if that happens. So I pray that you will step forward and honor your own name with all that happens between now and election day.”
Forget the mp3 — too bassy and echo-y, can’t hear the words.

John Lewis and Barack Obama on the deliberate agitating of low-information wingnuts by McCain-Palin at rallies. And McCain’s harumphy response.

During the W. junket Oliver Stone announced that there will soon be a website up that explains all the research sources for all scenes in the film, the accuracy of which may soon be questioned in conservative quarters. I suggested to W. screenwriter Stanley Weiser during our interview that the site should be up before opening day to make it easier for journalists working on serious analysis pieces a chance to reference, etc. Anyway, the film opens in six days and there’s no trace of the W. fact site. Yet. As Luis Guzman‘s character says in The Limey, “You could see the sea out there if you could see it.”

“The first and perhaps only great mayor was Greek — he was — Pericles of Athens and he lived some 2500 years ago and he said, ‘All things good on this earth flow to the city because of the city’s greatness.'” That means, in part, beautiful women. Not necessarily the best in terms of character or loyalty, but looks, brains and talent have always been drawn (and will always be drawn) to power and the hustle-bustle.

Electoral Vote projects Obama over McCain, 343 to 184 electoral votes (and 11 unaccounted for). Yahoo’s Dashboard foresees Obama taking 330 to MCain’s 175. And fivethirtyeight is estimating 384.3 to 189.7, Obama again favored. Without a new Great Depression Obama would have won by a smaller margin, but he would have taken it. 24 days to go and the question everyone’s asking is whether a game-changing shoe will drop and tighten things up. I’m 95% sure nothing jarring will happen during the final debate. If it’s anything it’ll be a big move in — or from — forces in the Middle East. Israel bombing Iran?

I love the loud red and blue colors on the current Lionsgate W. ad banners (they showed up yesterday, replacing the original somber design) and particularly the backwards digital clock. They’re vivid, exciting, audacious. You can’t say they don’t jack up your interest levels on W. I’m genuinely sorry for any crashed browsers out there. (There’ve been a couple of complaints.) Just to be limber and fluid I use four browsers — the latest Firefox, Internet Explorer 8, Safari for Windows and Flock (a newbie from the guys behind the old Netscape). 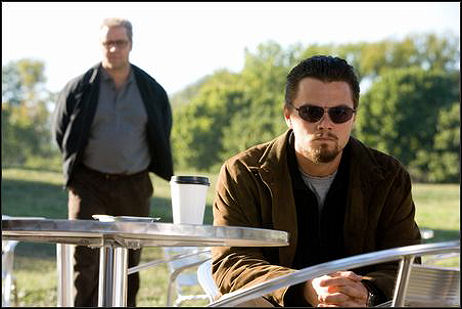