Support on Patreon Follow @wellshwood
12 Comments
Once More With Feeling

At Friday’s Revolutionary Road after-party at 21, the legendary old-time haunt on West 52nd Street that, for me, will always summon memories of the backroom scene between Burt Lancaster and Tony Curtis in Sweet Smell of Success. Funded by Paramount Vantage, the event was another Peggy Siegal special. 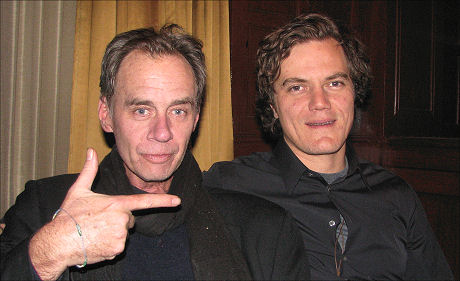 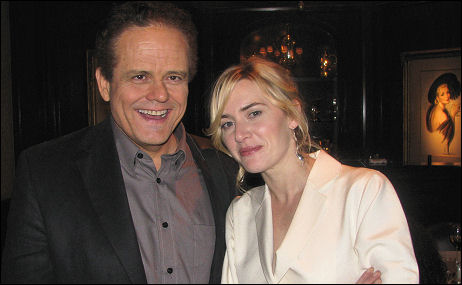 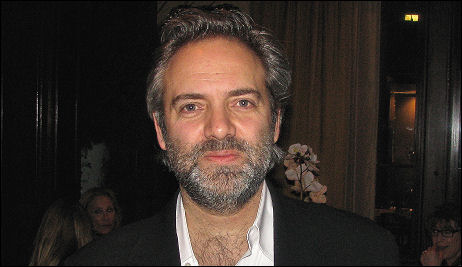 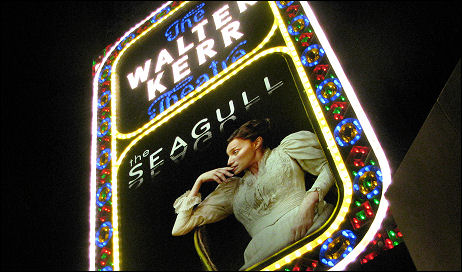 Spoiler alert: If there’s one problem facing Darren Aronofsky‘s The Wrestler in terms of older Academy viewers (i.e., 50-plus), it’s probably the scene involving metal staples. I say this as an admirer of this scalding character drama, and as a major supporter of Mickey Rourke‘s shot at landing a Best Actor nomination. But without going into specifics, the scene I’m alluding to didn’t draw me in or win me over by any stretch. It’s just a speed-bump thing so I recovered and moved on, but the memory of it…wow. 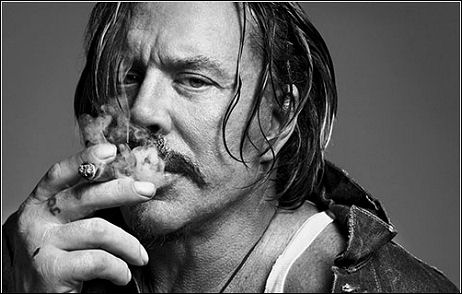 New York‘s “Vulture” guys have offered 28 reasons why Twilight the movie is better than Twilight the book[s]. In other words, one of the most hardboiled, cynical-minded, showbiz-covering blog teams in the western hemisphere likes it also. See what’s happening here?

$48 dollars to listen to Peter Bogdanovich talk to Jerry Lewis at the Times Center (242 West 41st Street) tomorrow night? I’ve spoken to Lewis (once) and read many interviews with him, and he’s always seemed a little too snippy and smug about everything. And I’m wondering, no offense, if it’s worth paying nearly $50 bills to hear him talk. If you’re going to go off the cliff with jacked-up prices why not charge $78 or $68? Why not $90? I’m not getting a sense of proportion. Order tickets online or by phone at 718.784.4520.

As expected, Twilight is polling on Rotten Tomatoes about 55-45 negative-positive. Obviously a serious difference of opinion, but it’s interesting to see how this and that high-cred critic thinks it’s silly or worse and others are touched by it, or at least respect its strategy and understand what it’s going for. Like The Philadephia Inquirer‘s Stephen Rea, for example, saying “it’s about as intense a series of onscreen clinches as the movies have seen in ages…but amazingly, it feels real — the actors pull it off.”

But the two best paragraphs written about the film have come from Time‘s Richard Corliss, to wit:

“Twilight…observes movie laws as aged as Edward, who was initiated into the realm of the undead in 1918. Defiantly old-fashioned, the film wants viewers to believe not so much in vampires as in the existence of an anachronistic movie notion: a love that is convulsive and ennobling. Bella could be any Hollywood heroine in love with a good boy whom society callously misunderstands. She’s Natalie Wood to Edward’s James Dean (in Rebel Without a Cause) or Richard Beymer (in West Side Story). Cathy, meet Heathcliff. Juliet, Romeo.

“This brand of fervid romance packed ’em in for the first 60 years of feature films, then went nearly extinct, replaced by the young-male fetishes of space toys and body-function humor. Twilight says to heck with that. It jettisons facetiousness for a liturgical solemnity, and hardware for soft lips. It revives the precept that there’s nothing more cinematic than a close-up of two beautiful people about to kiss.

“The movie’s core demographic is so young, its members may not know how uncool this tendency has become. But for them, uncool is hot. And seeing Twilight is less a trip to the multiplex than a pilgrimage to the Lourdes of puberty. It’s the girls’ first blast of movie estrogen.”

The universal theme in Revolutionary Road is conveyed in a mid-point scene in which Leonardo DiCaprio‘s Frank, taking a walk in the woods, sardonically mentions “the hopeless emptiness of the whole life here.” In response to this Michael Shannon‘s truth-telling loose cannon, walking with Frank, says that “plenty of people are on to the emptiness, but it takes real guts to see the hopelessness.”

Snicker if you want and call this a variation on the Woody Allen/Annie Hall view that all of human existence is divided into the camps of the miserable and the horrible, but the Road theme that will connect, I believe, with general ticket buyers and Academy members is the general feeling that “this is not working, this is not it, this is not fulfilling — and we need to free ourselves from the trap.”

This is obviously a time of change and turnover, and if anything brought about the election of Barack Obama it was a majority of people recognizing and saying the above in a present-day context. Moviegoers will initially relate to Frank and April Wheeler as tragic figures, but as you get into the film an idea takes shape that they’re also echo-metaphors for what’s vaguely wrong now, or at least as symbols of the need to get rid of what’s taking us all down.

In serious artistic-cred terms (as opposed to counting hands in a high-school popularity poll), the Best Picture race has been radically altered by the arrival of Revolutionary Road. It is the new King Shit among the ’08 power-punchers — films that reflect some aspect of the real grit out there and say “this could be about you.” As I wrote last night, it’s “the strongest heavyweight drama I’ve seen all year so far…a corrosive and heartbreaking masterwork.”

As I also wrote yesterday, “A Best Picture winner has to be a manifestation of someone’s idea of a great, drop-dead, grand-or-penetrating-theme art film or it has to get people emotionally in a big way. Sorry, but them’s the rules.” Revolutionary Road obviously treds familiar ground (the old suburbia-sucks, let-me-outta-here mantra), but without question it’s a manifestation of the latter.

The only other film that truly towers over the rest is the film that very few of the elite critics will stand behind because (a) they have eyes but will not see or (b) they lack the cojones to stand up to the conventional wisdom that a film has to be at least semi-commercial to be Oscar-worthy — Steven Soderbergh‘s Che. Re-order your thinking on this concept lest you imperil your immortal souls. Choose your heroes and champions based on the criteria of the Movie Gods, not the likes and dislikes of the oafs and serfs who pay to see movies down at the mall….good heavens.

Soderbergh’s lack of interest in even beginning to attempt to “entertain” the popcorn-munchers is not a plus sign in and of itself, but critics and smart industry viewers should at least be able to see what’s going on here and at least give credit where due. Che is the pure and even made majestic, the telling of a two-act story that could only have been lessened by being shaped into “drama.” It is naturalism in the rough, unpretentious verite magnificence, poetry in the details, an au natural hang-out-with-a-legendary-figure presented as a form of truth both literal and eternal. And yet it is so stand-alone “out there” that you can’t really call it drama. 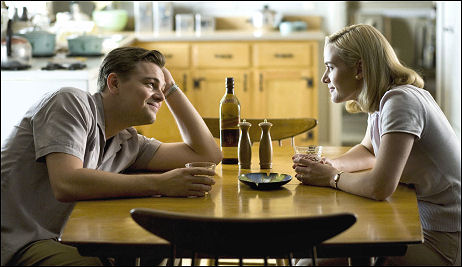 Besides these two you have Slumdog Millionaire, a rouser that is obviously getting people emotionally. A fevered and sweeping Dickens tale, but, in the view of some, a bit too manipulative and willfully “extreme” to register alongside the cinematic distinctions of Revolutionary Road and Che. It may be the front-runner right now, and it may win the Best Picture Oscar, but we’ll see.

And Doubt, which is exquisite and immaculate on its own stage-play-transferred-into-cinematic-tension terms but isn’t quite as jolting or emotionally affecting or profound, even, as (no offense to John Patrick Shanley, Meryl Streep, Roger Deakins, Philip Seymour Hoffman and everyone else involved) Revolutionary Road .

Milk doesn’t have the heft or the chops or the emotional pull of Revolutionary Road or Che — I’m sorry but as strong and earnest and enhanced by Sean Penn as it is, Milk is a marginally lesser film than these two.

Frost/Nixon is a tight, well-written and admirably assembled drama that delivers a metaphor about the tendency of truth to hide its face until all other options and avenues have been exhausted. But it is primarily a performance film by the expert technique and sadness of Frank Langella‘s Richard Nixon. It’s not the stunner and soul-shaker that Revolutionary Road is, and not the majestic “other” that Che is. I’m sorry but there it is.

I have yet to see Gran Torino, Benjamin Button and The Reader so we’ll see what happens there.

I will be pledging allegiance and affection for Tom McCarthy‘s The Visitor from now to Kingdom Come. WALL*E is brilliant but it is the winner of the Best Animated Feature Oscar — it needs to stay on its own side of the Rio Grande. And if they gave an Oscar to the Best Tweener Drama of the Year, Rod Lurie‘s Nothing But the Truth would win hands down.

Last night’s Los Angeles DGA screening of The Curious Case at Benjamin Button was stopped after running a half-hour, according to In Contention‘s Kris Tapley. A “color channel on the digital projector” made the image look “washed out,” and so director of photography Claudio Miranda had publicists call director David Fincher to explain the problem, and thereafter the plug was pulled. A makeup screening will happen Saturday.

Tapley says “we liked what we saw. And after just 30 minutes, I’m pretty sure the film will take the Oscars for Best Makeup and Best Visual Effects walking away…pure magic.” Spoken like an elite mafia hitman who specializes in quiet kills. Hearing that a film has great technical pleasures is like hearing from a friend who’s set you up with a blind date that “she has a great personality.” The more people talk about Button‘s tech triumphs, the more this film is going to get shunted aside in people’s minds as a “very admirable but no Best Picture Oscar” type deal.

If I was a Paramount publicist working on Button, I would put out a mass e-mail to all journalists, columnists and bloggers saying, “Will you guys give us a break with the technical praisings (visual effects, photography, makeup) already? You’re killing us !”

N.Y. Times critic Manohla Dargis speaking (but not appearing) on the history of the screen vampire, from F.W. Murnau‘s Nosferatu and Max Shreck to the current “abstinence figure” vampire played by Robert Pattinson in Twilight — a figure who is “catnip to anyone with OJD (obsessive Jonas Brothers disorder),” as she says in her review.