The boys and I were standing in front of the Eiffel Tower nine years ago this evening, as ’99 gave way to ’00. This was easily the most dazzling New Year’s Eve fireworks display of my life. It began three minutes before midnight (“Wait…it’s only 11:57…who cares!”) and continued to erupt like some Krakatoa volcano three minutes after.

The metro shut down an hour later and tens of thousands had to walk home. It took us the better part of two hours to get back to our Montmartre studio, but the spectacle of it it all was partly Jacques Tati and partly Cecil D. DeMille, like some inebriated exodus out of Egypt, moonlit multitudes flooding the streets and sidewalks…amazing.

A friend and a p.r. guy who works in midtown Manhattan offered an interesting Milk post earlier today:

“After recently seeing Milk last weekend i was struck by its thematic/plot similarities to Braveheart, to wit: (a) both are about a revolutionary figure who finds his calling mid-life; (b) this figure unites a previously persecuted group to fight for change (gays and Scots; (c) in so doing, said figure naturally upsets certain status quo political place-holders (Anita Bryant and John Briggs in Milk, the monarchy in Braveheart); (d) said figure is a great motivator and public speaker, leads troops into battle/marches and protests; (e) said figure is ultimately killed but his legacy lives on and inspires a new generation to challenge ruling authority

“I realize that these themes are common to a lot of Hollywood biopic inspirational pics,” he concluded, “but this comparison really leapt out at me.”

It appears that the comparison between Illinois Gov. Rod Blagojevich and Wile E. Coyote has come from author Eric Dezenhall (“Damage Control“) in a 12.31 piece on Medio. “The people who get themselves into these messes are like Wile E. Coyote…people who are in love with their own cunning who end up driving themselves off a cliff,” Dezenhall says.

57 Comments
Concrete Under Your Feet

I need to stay in the city until sometime in the early morning, despite the intense cold and wind. I live below a family of animals — Hispanic party elephants — who stomp around and play music so loud that the building throbs and the plaster cracks. It’s a fairly safe bet they’re going to lose their minds tonight so I may as well just huddle down in the city and bounce around from bar to bar. 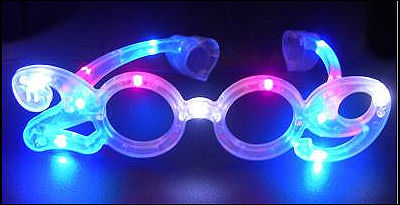 I won’t go near Times Square, of course. New Year’s Eve is the emptiest holiday ritual of the year, and an opportunity for shallow under-30s to act like assholes.

Joaquin Phoenix and Brett Ratner the night before last at a Miami hotspot called Liv. I just sense a great caption waiting to happen. An impressionistic Daily Mail story by Mark Coleman, more or less based on this and other pics, describes Pheonix’s appearance as “bloated” and “disshevelled.” I think it may just be, in part, an attempt to look like Joaquin-the-musician instead of Joaqin-the-former-actor. Still, he does look a little polluted for a 34 year-old. The beard, of course, is identical to the one Bruce Willis wore in Barry Levinson‘s What Just Happened? 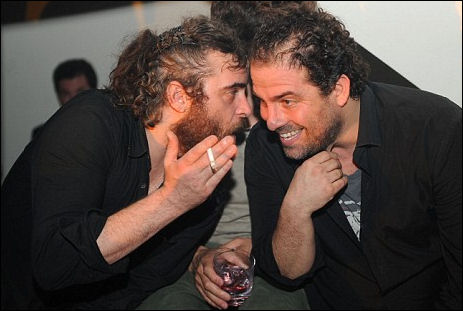 Here’s a N.Y. Post/”Page Six” anecdote about same. This is going to end one of two ways — Phoenix eventually going to rehab or eventually you-know-what.

In France Revolutionary Road is called La Noces Rebelles, which translates as Rebellious Weddings. If you’ve seen the film you’re aware the person who approved this title is a moron. HE pop quiz: come up with a better substitute title for Sam Mendes‘ film (i.e, one that relates to the movie in a way that makes a modicum of sense), go to Babelfish and translate it into French, and report back here. Not in English.

Here’s one I just came up with: Egouttement lent d’enfer suburbain.

I honestly think that Hotel for Dogs (DreamWorks, 1.16) is a truly great title for a (presumably) cheesy movie — the best since Snakes on a Plane. Because as soon as I heard it I wanted to see this stupid-looking thing. On top of which it’s got Don Cheadle and Kevin Dillon in it. It obviously fits right into the besieged economic depression mentality that led to the success of Marley & Me, minus the death element. If I don’t get a screening invite I’m going to pay to see this. 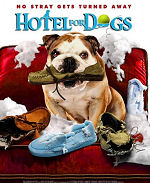 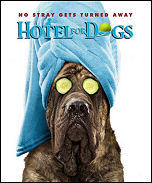 Possible ways for Jeremy Piven to redeem himself: (a) return to Broadway in a sharp, well-reviewed play (not a revival) and stay with it to the end of his contact; (b) swear off poon by way of a Leonard Cohen celibacy at an ashram in eastern Oregon, (c) deliver a strong performance in a first-rate film that expands his range (i.e., nowhere near Ari Gold ); (d) buy some work boots, strap on a utility belt and help build low-income housing in some economically hurting area, a la Jimmy Carter, or do a Sean Penn and go to Iran/Iraq, braving bullets and shrapnel.

Because right now (and especially with the publication of this Ben Widdecombe story) Piven has solidified his rep as a legendary doofus that a lot of people would really and truly love to see fail.

Matt Dillon was pulled over and arrested last night in Vermont for driving 106 mph on Interstate 91 near Newbury. The only people who drive this fast are (a) so late for something they’ve lost their minds, (b) sociopathic or rage-filled or (c) drunk. But the story doesn’t mention a DUI so that’s out. This is Vermont, remember — trees and hills and dips and curves. It’s not the Utah salt flats. There’s a huge difference between driving 90 mph and 106 mph. The first is “wow, look how fast I’m going…I didn’t realize”; the second is “fuck this, fuck me, fuck the rules.” 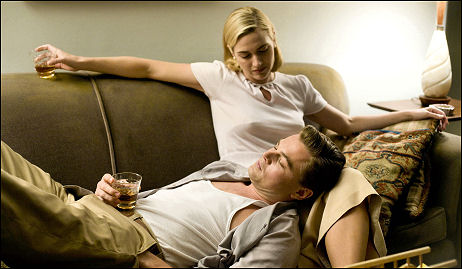 In this 12.30 posting, The Envelope‘s Tom O’Neil and Village Voice columnist Michael Musto dish on the likely Best Actress nominees. These guys are great at this because they’re glib and superficial and perceptive and blunt (at times to the point of being merciless) — surrender one of these qualities and it all falls apart! — and because Musto’s droll downtown urbanity meshes well with O’Neil’s eager-beaverness.

“Meryl [Streep] is obviously a lock for her pinch-faced nun,” Muston begins, “and Rachel‘s Anne Hathaway is another lock as the sociopath who disrupts the wedding, whom I was rooting for. Being put into a mental asylum gets you a nomination so I think Angelina Jolie is getting in for Changeling. Mike Leigh ‘s women get nominated so I’m rooting for Sally Hawkins, who has a lot of momentum.

“Kristin Scott Thomas‘ understated performance is falling off, a lot of people haven’t seen the screener [of I’ve Loved You So Long], and the ending is a little cheesy….Kate Winslet is the new Deborah Kerr, let’s face it… she could get two nominations and still lose…New York magazine called it a masterwork, but people are going to turn against Revolutionary Road, ahd instead say ‘give her the nod for The Reader.’ And I’m afraid that the other gals — Melissa Leo, Michelle Williams — are going to fall through the cracks…Sally Hawkins is taking their quirky indie spot.”

And this one about the Gay Superbowl is good also….”Hugh Jackman is openly whatever.”

Double-checking on the vivid cowboy hat, making sure it’ll be there when I arrive in Park City, intending to wear it around town during Sundance, etc.