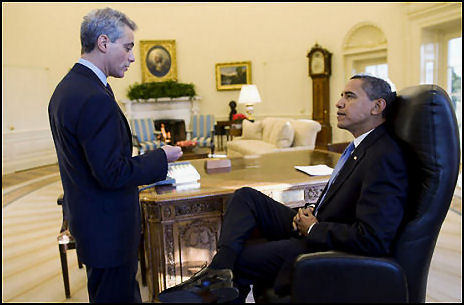 The New York Post reported a little while ago that Caroline Kennedy has folded her bid to seek appointment to the New York Senate seat vacated by Hillary Clinton.

To go by an e-mailed statement received a couple of hours ago, I think I understand the gist of Jeff “the Dude” Dowd‘s objection to the negative feelings about Dirt! The Movie expressed by John “knuckle sandwich” Anderson .

Dowd is basically saying that in the case of documentaries exploring the ruination of the planet and what can be done about this, film critics should get with the new spirit of the nation under Barack Obama and double-track their reviews.

In short, don’t just say if the film is well-made or not, but also give credit where due if the film is providing important and constructive information.

“Rather than precluding their opinions about anything they find negative in the film’s construction or execution,” Dowd says, “they [should] at least support any enlightening ideas and solutions.”

In other words, in the same way that the modern art trends in painting were “called off” during the government-sponsored WPA period of the 1930s, Dowd believes that film critics should, in the case of well-meaning docs looking to help turn things around for the planet, include a kind of WPA attitude in their analysis and criticism.

“My disagreement with John Anderson was not over his critical reaction to Dirt!, which he has every right to and which I find enlightening, but his statement that the film wouldn’t appeal to the public.

“I suggested he come back into the theater for the q & a and he would observe what we had seen at all four screenings — that audiences felt the film had all kinds of new information and practical solutions. It wasn’t homework, but hope made pragmatic on how we can change the planet in keeping with Obama’s Inauguration speech.

“I told Anderson one of scores of examples of this was when John Densmore of The Doors stood up at our first screening (after a sustained audience applause at the end) and said ‘I have my own film here–which I clearly care about–but here is my ballot which I marked 4 stars because Dirt! is the film that should win the Sundance Festival.’ That was emblematic of all the great feedback. I just asked Anderson to put that in the mix before making assumptions that audiences would respond negatively.”

“It should also be said that a vast majority of audience members liked the film not just because they ‘support the cause.’ We have heard dozens of comments about the quality of the filmmaking and storytelling as well. In the spirit of John Waters we even had smell-o-vision at one screening where you could smell the sweet earthy scent of dirt and mother earth.”

“Film criticism is fine but ill-informed assumptions are not what is best for the planet and not in the spirit of the dialogue that goes on at Sundance. He simply didn’t do a reporter’s homework and listen to audience members, before saying, ‘People will not respond to this film.” How can Anderson say those who responded so favorably are ‘just sheep‘, when most of the audience excitedly remained to discuss, and were clearly moved and inspired? I know that by the shank of the fest, critics are justifiably burnt-out, nonetheless he simply didn’t allow himself to see the reality here.

“We are at a historic time when information and dialogue are the life-blood of democracy and are essential to the future of the planet. In such a time informative and hopeful movies like Dirt! The Movie deserve discussion, not the simple dismissal John was unfortunately giving it.” 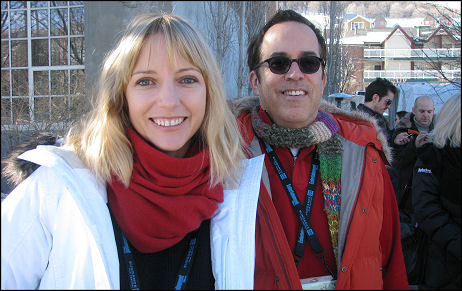 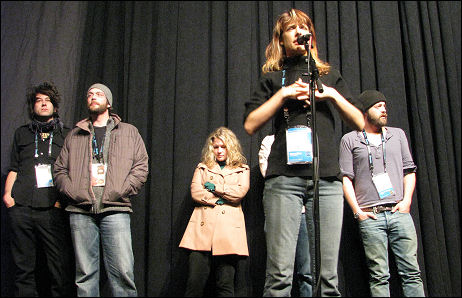 Because I did the right thing and focused on seeing two films I needed to see — The Greatest, which played at the Library at 11:30 this morning, and Humpday, which I saw and quite loved at a Racquet Club screening that began at 2:15 pm — I missed the noon dustup between John “knuckle sandwich” Anderson and Jeff “the Dude” Dowd. 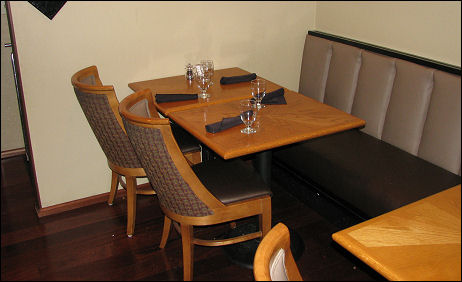 The dining table in the Yarrow hotel’s restaurant where Variety critic John Anderson was allegedly sitting before standing up and face-punching Jeff “the Dude” Dowd earlier today.

As I’m seeing Shrink at 6:15 pm, I don’t have time to talk to investigate and re-report the episode chapter-and-verse. Here are reports from Variety‘s Anne Thompson, Spoutblog‘s Karina Longworth and MCN’s Kim Voynar.

It’s not permitted to hit someone, but we all know how we sometime get when we’re tired and stressed from over-work. I think it’s very decent of Dowd not to have pressed charges. And of course, it’s very good for Dirt! The Movie, which is what the fisticuffs were more or less about.

I suggested a year or so ago that it might not be a bad idea to have an organized Movie Critics Fight Club, in which anyone who disagrees with the view of a critic would put on a pair of trunks and try to defeat the critic in the ring. Gloves, no bare knuckles. Whoever lost would be wrong and whoever won would be right by the law of divine ordinance. I offered to fight somebody over In The Valley of Elah…well, not really. I said I’d fight a New York critic who hated it, but I wasn’t sincere because I wouldn’t want to bang my hands up and not be able to write. I’m just saying that the concept of fighting for your film-loving (or hating) make sense on a certain level. 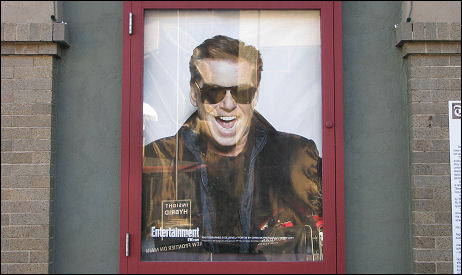 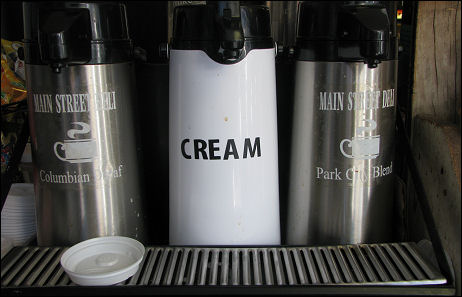 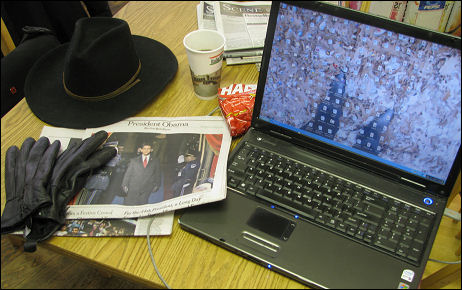 For the first time since arriving in Park City last Thursday I got lazy and slept until 7:30 am. So now I’m behind the clock and unable, for now, to post reactions to Dirt! The Movie and Don’t Let Me Drown. I have to hike down to the Library where I’ll be trying hard to bum a ticket to The Greatest (need to catch Carey Mulligan‘s other stand-out performance), and then it’s right over to the Racquet Club and Humpday.

I hate standing around and asking publicists for tickets to anything. All my journalist pals have that super-cool red pass that gets them into anything anywhere, and I’m stuck with a proletariat green pass that requires finagling and begging. Thanks, Sundance press office.

With the cat out of the bag after last night’s screening of The Girlfriend Experience , Some Came Running‘s Glenn Kenny has written about his cameo role as a sleazy website manager. And he confirms that yes, he “did write that nasty voice-over ‘review'” himself, and that “all of the dialogue of the film was in fact improvised.”

Reactions to Kenny’s cameo as well as the film have been generally favorable thus far. The best line has come from Cinematical’s James Rocchi (actually quoting someone else), to wit: that The Girlfriend Experience is “a period piece from October 2008.”

Here are reactions from N.Y. Post critic Lou Lumenick and Spoutblog‘s Karina Longworth. I put mine up last night, of course.

“I’ve seen many presidents come and go, but I’ve never watched a tableau like the one Tuesday, when four million eyes turned heavenward, following the path of George Bush‘s helicopter out of town. Everyone, it seemed, was waving goodbye, with one or two hands, a wave that moved westward down the Mall toward the Lincoln Memorial, and keeping their eyes fixed unwaveringly on that green bird. 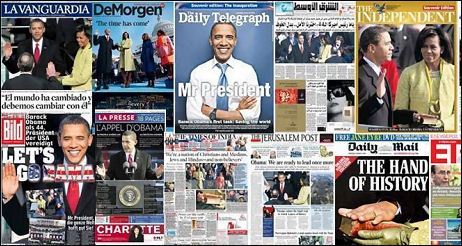 “They wanted to make absolutely, positively certain that W. was gone. It was like a physical burden being lifted, like a sigh went up of ‘Thank God. Has Cheney’s wheelchair left the building, too?'” – from Maureen Dowd’s 1.21 N.Y. Times column, called “Exit the Boy King.”