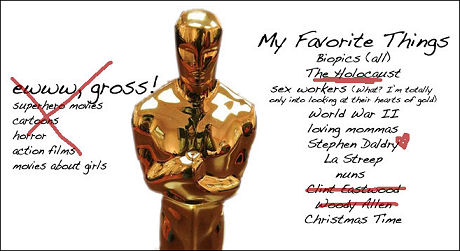 Based on the BBC mini-series of the same title, State of Play (Universal, 4.17) is “about a team of investigative reporters work alongside a police detective to try to solve the murder of a Washington congressman’s mistress.” Russell Crowe, Rachel McAdams, Ben Affleck and Helen Mirren costar. Screenplay by Matthew Michael Carnahan and Tony Gilroy; directed by Kevin Macdonald.

Posted 10 days ago by Joe Nicolosi. You could make a whole series of idiot synopsis summaries about dozens of classic films.

Star Wars: Retold (by someone who hasn’t seen it) from Joe Nicolosi on Vimeo.

7 Comments
Not Even A Mention?

In a 1.23 Alliance of Women Film Journalist piece called “Oscar-Worthy Women’s Work, 2009 Edition,” Eleanor Ringel uses the terms “achingly desolate” and “beautifully bleak” to describe…Revolutionary Road? Okay, fine, but when I first read these four words as a pull quote I naturally assumed Ringel was talking about Kristin Scott Thomas‘s performance in I Loved You So Long.

Which, by the way, Ringel doesn’t mention at all in the piece. Everyone else in the ’08 sorority — Melissa Leo, La Streep, Viola Davis, Sally Hawkins, Anne Hathaway, Marisa Tomei, etc. — makes the cut, but not Thomas, who arguably delivered the year’s most delicate, searing, stone-solid female performance. Why am I pointing this out and not Ringel? What is this?

Last week L.A.Times sports writer Lance Pugmire happened to run into Mickey Rourke during a visit to the Wild Card Gym. Rourke talked to Pugmire about the boxing world and the people in it. As Debbie Goffa writes, “It is a telling interview, just under four minutes long, and shows where Rourke’s heart really is — boxing.”

IFC Films has made a wise decision in acquiring U.S. rights to Armando Iannucci ‘s hilarious In The Loop, which I wrote about on 1.13. Pic will premiere at the Sundance Film Festival this evening. It costars Peter Capaldi, James Gandolfini, Tom Hollander, Gina McKee, Mimi Kennedy, David Rasche, Chris Addison, Anna Chlumsky and Steve Coogan. The deal was negotiated by Arianna Bocco and Betsy Rodgers for IFC Films with Cassian Elwes of William Morris Independent and Ben Roberts of Protagonist Pictures on behalf of BBC Films, Aramid Capital and UK Film Council.

15 minutes south of Santa Barbara from Hollywood Elsewhere on Vimeo. 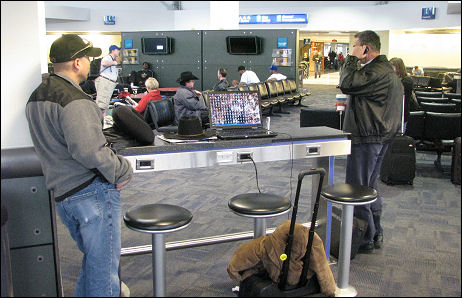 81 Comments
Respect Has Been Paid

In this corner, the three most warmly received Oscar nominations are those for Richard Jenkins in The Visitor for Best Actor, Melissa Leo‘s for Best Actress for her Frozen River turn, and an excellent Best Supporting Actor nomination going to Michael Shannon — Michael Shannon, ladies and gentlemen! — for his truth-telling nutter in Revolutionary Road.

I really wasn’t figuring on Happy-Go-Lucky‘s Sally Hawkins not getting nominated for Best Actress. ’08 really was her year, and she was honored up and down by many other awards-giving groups.

And the Academy blew off bestowing a gold-watch Best Actor nomination for Clint Eastwood in Gran Torino. Just not enough love.

The inclusion of The Reader in the Best Picture quintet is a bit weird. What decided it, I wonder — the holocaust factor? Because it really doesn’t work all that well.

What happened to the alleged groundswell momentum for The Dark Knight being Best Picture nommed, and especially WALL*E jumping the animation Rio Grande fence and getting nommed for Best Picture as well?

Hooray for Viola Davis receiving her much-deserved Best Supporting Actress nomination for that one absolute-killer scene in Doubt.

In my book and in the eyes of independent contrarian thinkers in years and decades to come, Che should have nabbed a Best Picture nomination, and Steven Soderbergh easily deserves a Best Director nomination for his intensely passionate work on this film. And a Best Actor nomination for Benicio del Toro as well — let’s not forget that.

No Best Picture nomination for The Dark Knight or WALL*E, but 13 nominations for The Curious Case of Benjamin Button? Okay, fine, what’s done is done…but in this respect the Oscar nominations are feeling a bit tepid to me.

Whoa, wait a minute, whoa…Brad Pitt has been nominated for Best Actor for playing a passive sponge man with two and a half expressions? This is a performance abour makeup and CG. Button is very worthy film in some respects, but this is comic relief. This is ridiculous. Nobody in the movie-savvy world has even flirted with medium-level (much less high) praise for Pitt’s performance in this film.

The Best Picture nominations went to Benjamin Button, Frost/Nixon, Milk, The Reader and the all but certain winner, Slumdog Millionaire.

I’m just going to post the nominations plain and straight and then run commentary in a subsequent post. My shuttle taking me to Salt Lake City arrives at 8:10 am — less than an hour from now! — so let’s just do this.

Here are the rest of the nominations. I have some commentary to post and a shuttle to catch in 20 minutes.