Lee Daniel‘s Push** won enough respect and rave notices at the Sundance Film Festival to be on everyone’s must-see list when it eventually arrives in theatres. Well and good. But I was unaware until today of the other Push (Summit, 2.6.09) — a seemingly low-rent sci-fi actioner.

The website for this Paul McGuigan-directed programmer tells me it’s not likely to be loved or remembered for very long. But I wonder which Push decided on its title first. It’s just weird for two of them to punch through (McGuigan’s is screening for the press in early February) in the space of a couple of weeks.

** The full title of Daniel’s film is Push: Based on the Novel by Sapphire.

Sharon Waxman‘s The Wrap, a new entertainment website, has been up and running for a few days now. Waxman is a sharp, go-getter reporter and a solid writer, but the site is…well, it’s fine. But it needs time to find itself. All websites do. It takes months, usually. Whatever you think a site is going to be when you start out, it always adapts and reconfigures.

Right now it seems a little familiar. Kinda Salon-y. A bit of a stripped-down Daily Beast thing going on. I don’t know. I know I could use some more sass and attitude and deep-dish stuff in my daily reading. Somebody who writes about Holywood from a high and confident perch, like Michael Wolff has written about Rupert Murdoch.

Defamer‘s Stu Van Airsdale is spitballing a scenario in which The Curious Case of Benjamin Button goes 0-for-13 on Oscar night. No way. It has to win for the CG face-pasting stuff.

People West Coast bureau chief Elizabeth Leonard has been demoted to senior writer, I’ve been told. I don’t know why they’ve slapped her down or what the corporate strategy is. I called a couple of staffers; nobody picked up. Leonard has been replaced by senior People staff writer J.D. Heyman, although not 100%. (Some of her bureau chief duties will be handled by other People staffers, apparently.) It’s a mess over there. Sooner or later all the Time, Inc. dead-tree publications are going to be remnants of their former selves — downsized, diminished, scrapped.

Dogs like this have the jaw-power to bite your hand off. But this guy’s a real sweetheart. He’s lost weight in recent months so he doesn’t seem as scary. He’s gentle, expressive, emotionally responsive. I’ll always be a Golden Retriever man but this guy’s all right.

Dog from Hollywood Elsewhere on Vimeo

I feel as if the 2nd Great Depression has finally hit me personally, as Nikki Finke is reporting that Variety columnist and reporter Anne Thompson — an excellent reporter and commentator, and one of my oldest friends in this racket — is among the Variety staffers who were laid off today.

Anne will keep her blog, Thompson on Hollywood, and is now talking with Variety about some kind of freelance revenue-sharing deal with them. Or she may tough it out and run her own site and sell her own ads, like myself and David Poland and others are doing. She will will continue teaching film criticism at USC and hosting Sneak Previews at UCLA Extension.

This is a terrible time we’re living through. May Barack Obama find and deploy the wisdom, strength and heavenly guidance to get us through this. Shame on the Republican ay-holes who are fighting Obama on the stimulus package, and whose lying, loathsome rationales were identified today by N.Y. Times columnist Paul Krugman. And remember this list of 25 people who brought us to this place.

“The Biggest Movie Event of the Year”? I don’t want to sound like a sourpuss, but this line doesn’t seem to quite get it. Next month’s Oscar telecast promises to be both more and less than this. The copy doesn’t begin to express the kind of Oscar year this has been. It seems oblivious to the Dark Knight, WALL*E, Kristin Scott Thomas and Gomorrah blow-offs. It ignores all the panicking going on right now. Barack Obama, ethical/cultural transformation and the current economic nightmare are “big” — what are the Oscars alongside these? 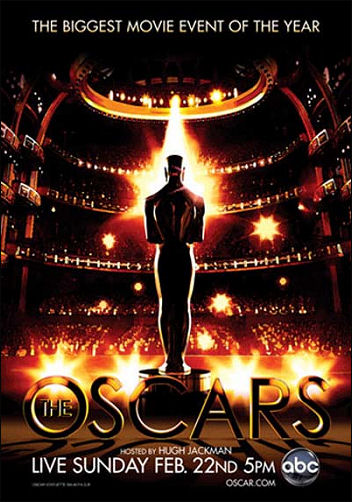 What should this poster say? If someone has a better line and can Photoshop it into the original, please send along.

Breakfast at a mostly vacant French Marketplace. Staffers, two or three patrons, a pair of Los Angeles County highway patrolmen and a grumpy-looking guy staring a hole in his scrambled eggs and fuming at his slower-than-a-turtle AT&T Communications air card — Monday, 1.26.09, 7:35 am. 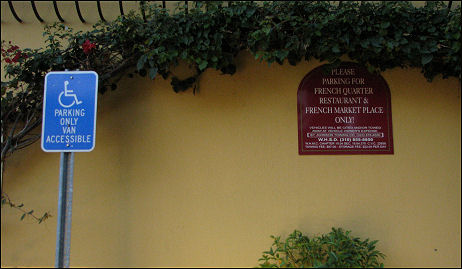 Poetry Arts Confidential’s Terry McCarty reports that Megan Seling and Brendan Kiley have been hired by L.A. CITYBEAT management to replace the jettisoned Andy Klein. Links to reviews written by these three are offered for comparison.

The Guardian‘s 1.26 edition includes a report by Julia Finch, Andrew Clark and David Teather that names the 25 bigwigs most responsible for bringing about the grimmest economic episode since the Great Depression. Remember these guys, hang them in effigy, take a poke at them on the street, boil them in oil, etc. It won’t solve anything, but it’ll feel good.

Deadline Hollywood Daily‘s Nikki Finke reported this evening that there may be layoffs “in both the business and editorial sides” of Variety happening this week, perhaps as soon as Monday. One tipster told her the number or rolling heads “might be as high as 30.”