Support on Patreon Follow @wellshwood
35 Comments
In and Out

I arrived in Memphis yesterday at 1:30 pm. It took me two, two and half hours to find and inspect four tourist spots — Graceland, the Lorraine Motel (i.e., the site of Martin Luther King‘s murder on April 4, 1968), Beale Street and Sun Records. I left Memphis at 4 pm, driving south on 55. I arrived in Oxford around 5:30 pm and checked into the Oxford Downtown Inn, courtesy of the Oxford Film Festival. And then the wireless issues began. 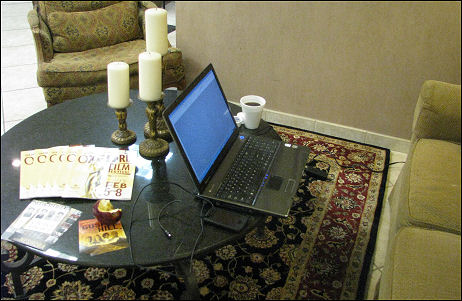 Forced to file from the lobby of the Oxford Downtown Inn. Taken at 5:40 am this morning.

It’s now just before 6 am and the issues haven’t stopped, and I’ve decided to cut bait as a result. That’s right — I’m outta here, flying back to NYC. Or maybe I’ll drive south a bit and cruise around, find an adventure, something. Any place with decent wifi I call home.

The hotel doesn’t offer wireless in the rooms, providing instead a late-20th-Century ethernet cable connection for internet access. Except the cable is only eight inches long — the only time in my life that I’ve ever seen or heard of a connection cable this short — and the connection it delivers is erratic and/or not strong enough, the result being that transferring jpegs to my server via FTP software stopped working almost immediately. I resorted to my AT&T Air Card, which worked for a while last night but stopped working this morning for some reason. It’s now 5:40 am and my only working connection right now (albeit a “very low” one) is the wireless that the hotel offers in the lobby only.

I can’t do this. I won’t do this. This is not 1997, and if a regional film festival is unable to provide easy, high-speed wifi to its journalist guests then no offense but it just shouldn’t invite them down in the first place. I mean, c’mon.

Bless Oxford, Mississippi in all other respects. It’s a soothing, pleasingly upscale, lively, obviously highly cultured college town with a real-deal 19th Century atmosphere. And the Oxford Film Festival has been, for me, a charmer in every respect except for the ridiculous internet situation. If I can’t post easily and swiftly, there’s really no point in being here.

So I’m packing my bags and heading back to Memphis this morning. I really don’t have time for this foolishness. I’m not there to sip moonshine and read Faulkner — I’m here to work, and it’s just too much work, too frustrating and too inconvenient to accomplish this goal.

Leaving for LaGuardia at 8 ayem and an 11:30 am flight to Memphis, and then a drive to Oxford, Mississippi, where it’s now 21 degrees. As I explained four days ago, the main order of business will be three days at the Oxford Film Festival (movies, a panel, southern cuisine) with a little touring-around on the side.

The south used to be an exotic Tennessee Williams-slash-Easy Rider land of danger for Northern boys like myself — a place known for tobacco-chewing rednecks in pickup trucks and Nehi signs and hanging moss vines and all that other stuff. My great fear is that the next four days will be like visiting a kind of homogenized southern theme park. Genuine aroma and atmosphere and slap-in-the-face experience are getting hard to come by. That’s why I wouldn’t mind a little Josh Brolin action in a bar somewhere, or…you know, something in that vein.

The 2.5 print edition of the N.Y. Times includes a story by Brooks Barnes about how Oprah Winfrey and Tyler Perry‘s enthusiastic support led to Lionsgate shelling out $5.5 million for Lee Daniels‘ Push — a reportedly strong but depressing drama that may play well among black audiences but probably hasn’t a prayer elsewhere. 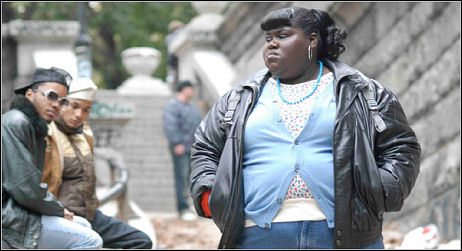 “One veteran studio marketer, who would speak only anonymously because he has ties to Lionsgate, said he saw almost no hope in selling it to a broad audience,” Barnes writes.

I could say something but I should see the film first. I didn’t want to see it at Sundance because (a) I don’t trust Lee Daniels and (b) I didn’t feel particularly enthused about immersing myself in the sadness of a morbidly obese African-American girl who’s carrying her father’s child for the second time and has self-esteem issues that would bring down an African bull elephant.

What’s wrong with me? Why didn’t I take the plunge? Apart from the fact that I’m not as deep and open to new realms as critics like John Anderson and Scott Foundas? I don’t know but I feel vaguely guilty about this. Emphasis on vaguely.

53 Comments
Bale Is For Real

Key passage: “Think about it…why don’t you see photos of Christian at the clubs or TMZ video of him dining at Nobu or walking the red carpet pimping himself? I’ll tell you why — he’s about the work, period. He’s a family man living a modest life knowing it could all end tomorrow, and one gets the feeling he would be okay with that.”

If it’s mainly about the work, then why is Bale starring in a friggin’ Terminator film under McG, one of the genuine demonic forces working today? That isn’t about the work — it’s about the paycheck.

To hear it from Salon‘s Andrew O’Hehir, the two most likely winners of the Best Live Short Film Oscar are Jochen Alexander Freydank’s Toyland (i.e., this year’s Holocaust contender) and Elizabeth Marre and Olivier Pont‘s Manon on the Asphalt.

A 13-minute long World War II-era drama, Toyland is about a German mom having a panic about whether her missing son might have unintentionally left with the Silversteins, her neighbors, on a train trip to “Toyland.” O’Hehir calls it “the obvious choice to take home the award,” especially given that there’s a “twist at the end…that will break your heart.

Manon on the Asphalt, he says, is “arguably the most risky and adventurous film on the list…a miniature, more Parisian and even cuter version of Crash” that is either “heartfelt and affecting or trivial and prepackaged.” Nonetheless, “a strong contender to take the prize.”

These and other nominated shorts will be playing in various high-culture burghs starting this Friday, 2.6. Magnolia Pictures and Shorts International are the responsible booking parties.