Support on Patreon Follow @wellshwood
39 Comments
“Most Important Film Of the Year”?

Forest Whitaker and 50 Cent (a.k.a., Curtis Jackson) playing Dr. Jekyll and Mr. Hyde in another adaptation of the Robert Louis Stevenson classic, with Abel Ferrara directing? This is the worst idea I’ve heard in months. It sounds awful. It would be one thing if the actors looked vaguely similar or at least had similar physiques. These guys don’t even look like cousins. We all want Ferrara to keep body and soul together, but of all the things he could do…

Lou Ye‘s graphically gay Spring Fever didn’t arouse me pro or con or any which way. I tried tapping out a reaction last night but nothing happened. I walked around and shot video instead. I tried again this morning, couldn’t get it up. So I’m deferring to Derek Elley’s 5.13 Variety review, which I fully agree with.

“Three years after tweaking the nose of China’s Film Bureau with full-frontal nudity and direct references to the 1989 Tiananmen Square incident in Summer Palace, mainland helmer Lou Ye is at it again — this time with lashings of gay sex — in the five-way ensembler Spring Fever,” he begins.

“Pic circumvents the bureau’s five-year filmmaking ban on Lou by being registered as a Hong Kong-French co-production, though beyond fests (especially gay ones) and the hardcore arthouse crowd, this over-long, very Euro-flavored Spring won’t make many B.O. wickets bloom.”

Fish Tank star Katie Jarvis “was having an argument with her boyfriend across a train platform at Tibury Town station in the East of England when she was approached by a casting director,” writes Indiewire‘s Eugene Hernandez in a piece called “The Discovery of Cannes (so far): Katie Jarvis.”

“Jarvis, who’d never acted before, didn’t believe she was actually being approached for a film and intially declined to give over her phone number. Later, when asked to dance during an audition, she also declined. But dancing is crucial to the young character of Mia in the film, so the room was cleared and she danced alone in front of a camera. ‘We were looking for a real girl,’ Arnold said this morning in Cannes.

A “real girl,” I would add, in the instinctual Bristol Palin sense of the term. Jarvis isn’t in Cannes because she gave birth last weekend. Frankly? If Jarvis was into acting or at least trying to make the most of her opportunity, would she have decided to have a kid just as filming was ending, or soon after? (Fish Tank was shot last summer.) If she was committed to having a child this early in life, you’d think she’d at least wait a year or two and see what might come from the acclaim and attention. Kids are expensive.

Prior to last night’s 7pm showing of Lou Ye‘s Spring Fever at the Salle Debussy, journalists were treated to high-quality video of celebrities arriving for the red-carpet premiere of Up, which was happening next door. Watch and listen. I heard swooning sounds when Aishwarya Rai appeared.

We’re all struggling to get over and break through into something or some realm that will make us feel happier or less miserable. Teenagers, of course, struggle and suffer the most, at least in their own heads. I went through emotional hell from age 13 to 18, and the only thing good about it, looking back, is that I grew past it. It could’ve killed me but it didn’t. 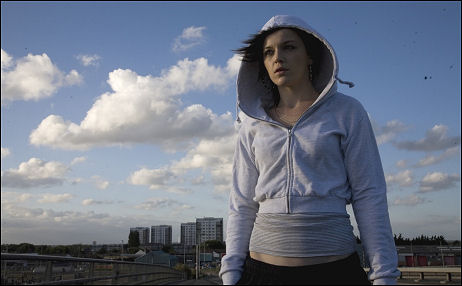 I know that if a gifted filmmaker had made a study of this period in my life and turned it into a two-hour drama, the result would most likely have been depressing. This kid is a near-goner, film critics would say. Smart and loves movies, but no hunger or vision or interest in building his life into something. Defined mainly by anger at his father and partying with his friends.

But I had, at least, caring, literate, well-off parents of good character who instilled a disciplined approach to living and working, and who kept urging me to stay focused, etc. My life eventually panned out but it was definitely touch-and-go for a while, largely due to effects of my father’s alcoholism (which, to his credit, he eventually dealt with by joining AA). We all have our sad tales to tell, but God help the kids out there now with issues like mine but who have dreary parents with self-absorbed attitudes, or are growing up in bad-influence, trash-culture neighborhoods in which everyone is just going through the motions.

The central question in any teenage-struggle drama is not just “do you believe in the reality of what this kid is going through?” but “does this kid have some ace in the hole that might save him/her?” Because if they don’t — if it’s just cigarettes and booze and rage and kicking around with no end-game in mind, and with no mentor in sight — then it’s hard to emotionally engage because you know (or strongly suspect) where this kid is headed.

You don’t have to believe that a kid might get lucky and pull through somehow — not every hard-knocks drama has to end with a sense of hope or salvation — but there’s something in all of us that pulls back when we see a slow-motion tragedy in progress. It becomes a kind of dull horror story — interesting if the director is a gifted observer and has a good eye, but only in spots and spurts because the central issue has been all but decided. 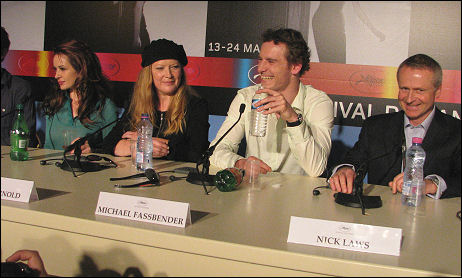 This is more or less the case with Andrea Arnold‘s admirably tough and grim Fish Tank, which screened this morning in the Grand Lumiere. It’s about Mia (Katie Jarvis), an angry 15 year-old who loves to dance but has no support system of any kind. She lives with an all-but-worthless mom and a plucky kid sister in a dirty and cluttered apartment in a low-income British hellhole. (The film was shot in Kent, England.) And you just know she ain’t goin’ nowhere, barring some miracle.

So this is basically a female Billy Elliot with no hope, no shot, no Julie Walters to teach and encourage, no father willing to break his back in order to pay for his son’s education at a London arts academy, no Marc Bolan singing “I Love To Boogie”….none of that. (Well, okay, there’s a cut of “California Dreamin'” by…crap, I’ve forgotten his name.) Fish Tank is extremely well captured with a powerhouse performance by Jarvis, but it’s all about the shit end of the stick.

The story is about how Mia gets it in her head that her mom’s new boyfriend, a handsome, good natured security guard named Connor (Michael Fassbender), may have a bit of what she needs. A friendly smile, a kindly attitude, a positive paternal-ish influence. And for a while he seems like a good thing, especially with his encouragements about Mia’s dancing, which he says is “great.” But then you know what happens. And if you can’t guess you need to think harder.

The grimness in Fish Tank is, I think, vaguely similar to the mood and material in Tony Richardson‘s The Loneliness of the Long-Distance Runner. Tom Courtenay played an angry resentful teen who winds up in a borstal for thievery, but his ace in the hole — i.e., being a good long-distance runner — is used to deliver a jolting dramatic turn at the finale, and one that said something profound about nihilism among working-class youths of the early ’60s. Fish Tank‘s story never even begins to build into anything remotely similar. It pretty much stays in the pit from start to finish. 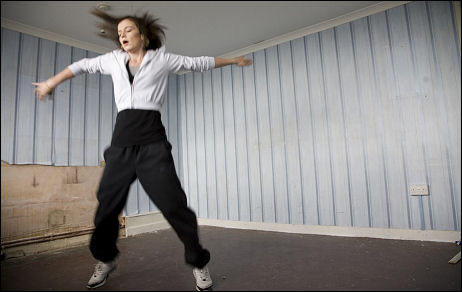 The chops in Fish Tank are accomplished and impressive. Arnold, who directed and wrote, knows exactly what she’s doing — she’s the real deal as far as having a voice and a vision of life is concerned. I liked that she and cinematographer Robbie Ryan shot the film in 1.33, which is usually a result of an intention or a deal to air it on analog TV. Fassbender, a very hot guy now, is natural and believable, charming and genuine. Ryan’s hand-held camera work is unpretentious and the images are appropriately plain — i.e., naturally lit but not excessively grim.

It feels right all the way, in short, but it didn’t leave me with much save the quality of the work. It didn’t so much remind me of how I felt at that age as much as return me to that mindset with even grimmer circumstances. I was angry but Mia is so furious she’s close to emotional idiocy.

Note: It was announced at the press conference that Jarvis isn’t in Cannes due to having had a baby last weekend.

One super-efficient way to blow euros during an eight or nine day visit to the Cannes Film Festival is to eat out every night. It’s much cheaper to (a) work late and (b) eat fruit, paninis, party food and bring home bottles of beer. But it’s great to wander around and watch. Makes for a mildly dull video, I admit, but I’m glad I shot this. Mild contact high.