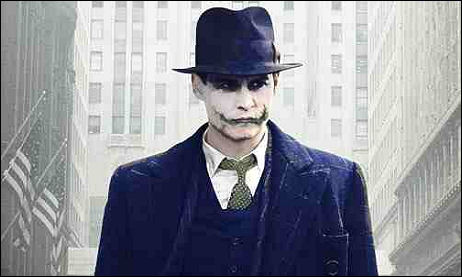 An absurd-sounding story by The Wrap‘s Sharon Waxman and Amy Kaufman appeared early this afternoon, claiming that Nikki Finke was paid $14 million for Deadline Hollywood Daily. If this turns out to be real (or even two-thirds or one-half real), the person who approved the deal would have to be called an idiot.

If I was a prospective buyer I would think twice about paying Finke $1.4 million for her site. If Finke ever leaves her house (I’ve heard she rarely does this) and gets hit by a car like Shelley Winters in Lolita, DHD would be worth absolutely nothing — zilch.

Waxman/Kaufman have written that a knowledgeable source said the $14 million “would be paid out over several years” and that “normally such deals are tied to traffic or to revenue projections…nonetheless, it is an exceedingly high price for a relatively small website.”

I was reading Kris Tapley‘s nicely written Batman nostalgia piece and happened to click on the attached YouTube clip of the opening credits. And it was like….whoa! Take away the dark minicam footage (i.e., squirreling through the shadowy caverns of the Batman crest) and the titles alone seem so primitive, so austere — almost like the main titles for a King Vidor or Sam Wood film of the 1940s. You would never see such plain-looking credits on a big-budget comic-book superhero film today.

“Transformers: Revenge of the Fallen is a horrible experience of unbearable length, briefly punctuated by three or four amusing moments,” writes Roger Ebert in a just-posted review. “One of these involves a dog-like robot humping the leg of the heroine. Such are the meager joys. If you want to save yourself the ticket price, go into the kitchen, cue up a male choir singing the music of hell, and get a kid to start banging pots and pans together. Then close your eyes and use your imagination.

“The plot is incomprehensible. The dialog of the Autobots, Deceptibots and Otherbots is meaningless word flap. Their accents are Brooklynese, British and hip-hop, as befits a race from the distant stars. Their appearance looks like junkyard throw-up. They are dumb as a rock. They share the film with human characters who are much more interesting, and that is very faint praise indeed.

“The human actors are in a witless sitcom part of the time, and lot of the rest of their time is spent running in slo-mo away from explosions, although — hello! — you can’t outrun an explosion. They also make speeches like this one by John Turturro: ‘Oh, no! The machine is buried in the pyramid! If they turn it on, it will destroy the sun! Not on my watch!’

“The humans, including lots of U.S. troops, shoot at the Transformers a lot, although never in the history of science fiction has an alien been harmed by gunfire.

“The battle scenes are bewildering. A Bot makes no visual sense anyway, but two or three tangled up together create an incomprehensible confusion. I find it amusing that creatures that can unfold out of a Camaro and stand four stories high do most of their fighting with…fists. Like I say, dumber than a box of staples.”

“Arguably, one reason why the film industry has encouraged and promoted the concept of director’s cuts…is that it enables a film’s owner to sell the same product to the same customer twice — or even, in a few special cases, three or four times. Presumably, if you recut somebody’s film, the damage isn’t serious because it can always be ‘restored’ on DVD. The basic mythology appears to be that every film has two versions, a correct one and an incorrect one. But in fact this isn’t quite true.

“A better paraphrase of the mythology would be, more paradoxically, that every film has at least two versions — a correct one and a more correct one, to be succeeded in turn by further upgrades.” — from a 6.23 Slate piece by Jonathan Rosenbaum‘s called “Death by a Thousand Director’s Cuts — How DVD marketing is rewriting the history of film.”

Daybreakers, a Lionsgate vampire film opening next January, is obviously looking to appeal to 28 Days Later fans with its use of the word “day,” the title itself (anathema to vampires) and the dominant redness, which characterized the art for Danny Boyle‘s film. The newbie stars Ethan Hawke and Willem Dafoe, and has been co-directed by Michael and Peter Spierig, whose last feature was ’03’s Undead. 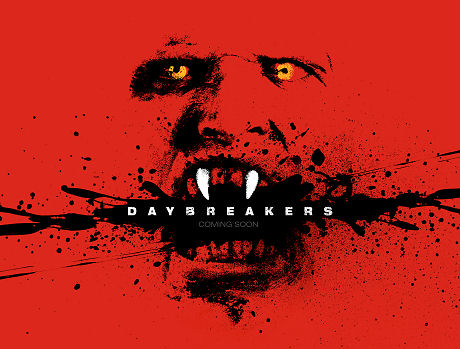 The Bruno screening I spoke of yesterday came off as scheduled at 4 pm at Mann’s Chinese. 20% critics, 80% hoi polloi. It’s all cool and fine but no reviews or riffs until July 6th.

I finally got around to reading Steven Zaillian‘s 12.1.08 draft of Moneyball, or a portion of it. And I can kinda see why a producer-manager friend passed along word about it being “terrific, and why Brad Pitt signed on. But the entire Sony staff, Amy Pascal included, was shocked to read the new script which had been substantially rewritten — a whole different movie.” Again, if anyone can please send along the Pascal freak-out draft, I’ll read both and run a comparison piece.

Hats off to the ad agency guys who assembled this Inglourious Basterds trailer. It’s a very shrewd use of footage, cut together just so, that has actually boosted my recollection of how the film played when I saw it in Cannes. That’s impressive salesmanship.

MMC, the owner-operator of Movieline.com and HollywoodLife.com, has bought itself a handful — Nikki Finke‘s DeadlineHollywoodDaily.com. Great for Nikki, nice payday, etc. Except now the Movieline guys (Stu Van Airsdale, Kyle Buchanan, Seth Abramovitch, etc.) are going to have to adopt a certain position and attitude towards Finke…right? Play ball, get along, noblesse oblige?

1:53 pm update: Finke wrote at 11:04 am that “the site will become bicoastal and debut a New York City-based senior journalist soon.”

I’m sorry to be slow but I only began to pay attention last night to Neda, the young Tehranian woman who was killed last weekend and became an instant martyr and “central rallying cry” of the Iranian rebellion. Everyone’s sister, everyone’s daughter. Here’s the original video and separately shot footage.

Ed McMahon, who passed early this morning at age 86, was Johnny Carson ‘s indefatigable announcer and sidekick for 30-odd years. He was known for being likably jovial — a dependably upbeat middle-class personality. I knew him well because he was almost exactly my father’s age. To me he was always strictly a World War II generation guy. Yaw-hawh, scotch and soda, get out there and sell! He never got the transformational ’60s youth culture thing, never grew a moustache, never stopped being “Ed McMahon.”

McMahon played a straight supporting role in a 1967 Larry Peerce film called The Incident, which was about hooligan terrorism on a New York subway car. (He played a regular married commuter type, and wasn’t half bad.) There’s a McMahon tape loop from my teenage years that won’t go away. He’s doing a straight-to-the-camera ad on the Tonight show, and he finishes with this line: “Serve your man an Uncle Ben’s meal.” (An old ’70s joke. Q: “What’s white and crawls up your leg?” A: “Uncle Ben’s perverted rice.”) I still say McMahon’s biggest cultural accomplishment was inventing “Hiyohhh!” Ask Martin Mull.