I’ve just heard from Ben Stiller about the satirical Red Hour/20th Century Fox video that was released yesterday afternoon by Movieline. “It seems the Red Hour Industrial got out there! Just wanted to give you the context if you’re interested. It was made for Fox execs and handed out with Red Foxx T-shirts at our initial meeting. We wanted to do something for them to kick things off. They were all in on it, and especially [Tom] Rothman, who is a good friend. [It was] obviously not meant to go out in the world, but I guess that’s pretty hard to stop these days. Hope you’re well. Love that Hurt Locker. Best, B.” 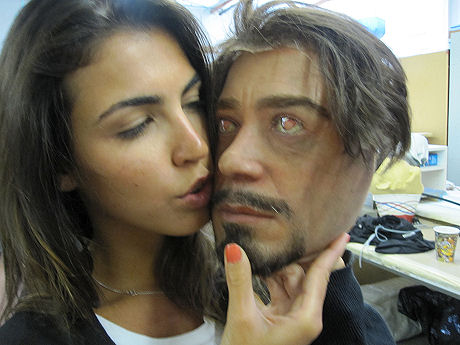 Back by popular demand — an alternate shot of fake Robert Downey, Jr. intimacy with Brazilian participant during Wednesday’s InFilm tour of Legacy, the model and visual effects shop created by the late Stan Winston. 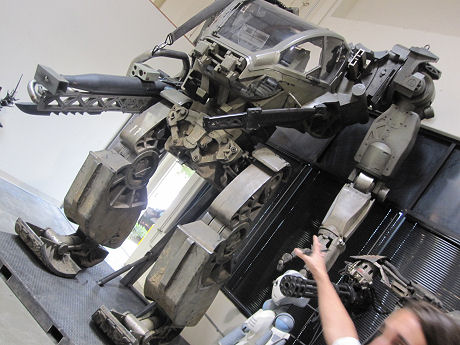 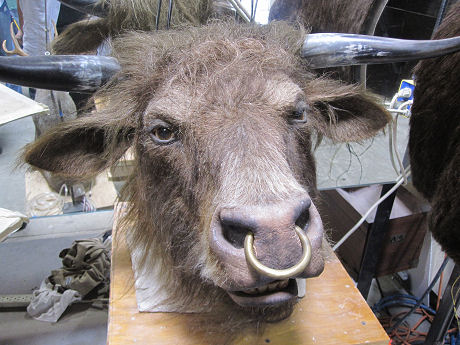 My immediate, honest-to-God, solar-plexus reaction to today’s news about Rob Marshall being the likely helmer of Jerry Bruckeimer‘s Pirates of the Caribbean 4 — a project that warrants the same degree of respect and esteem as Jaws 4: The Revenge — is that it’s not going to help matters if Marshall earns a degree of Best Director consideration for Nine later this year. My gut tells me the Bruckheimer gig is going to hurt in the same way that Eddie Murphy‘s starring role in Norbit helped put the kibbosh on his Best Supporting Actor campaign in ’06/’07 for Dreamgirls.

Gamer…great. An action film that’s a little bit different (gamers controlling prisoners in mass-scale, ultra-violent online games involving real death) but makes the relationship between Gerard Butler and Logan Lerman (in this clip at least) feel an awful lot like Bruce Willis and Justin Long in Live Free or Die Hard. So viewers will, you know, feel safe and assured.

Megan Fox clearly humiliated Seth Rogen by preventing him, quickly but gently, from planting a cheek peck or air kiss. That’s cold, man. And in my book that’s it for Fox. She can’t be taken down soon enough.

Funny People “is leisurely, with many extended sequences, but the performers’ natural command of rhythm holds it in tension,” writes New Yorker critic David Denby in a review dated 8.3. The hilarious dialogues among the three roommates are like complicated, interlocked sparring matches.

“The scenes between Adam Sandler and Seth Rogen are more conventionally dramatic, but George’s shifting moods make them unstable and nerve-racking. Apatow is not only generous to performers here; he’s generous to himself, too, creating the kind of visual divertissements he has never attempted before — most memorably, a mock George Simmons family film, Re-Do, with Sandler’s grownup face digitally joined to the body of an infant.

“George talks on the phone, complains, shouts. He literally returns to diapers — the comic’s inner infant never dies. But when [he] tries to act as a grownup in life, things don’t go as well. He has a vision of the happiness he lost — a relationship with a live-wire actress, Laura (Leslie Mann), twelve years earlier. He cheated on her, and they never married, but, his disease in remission, he tries to get something going with her again, even though she’s now living in Northern California with her two daughters (the actual children of Apatow and Leslie Mann) and her fierce Australian husband (Eric Bana).

“Like an errant meteor, George crashes into a functioning family. The last third of em>Funny People is a further development of the question that em>Knocked Up/em> asked: What does it take to be a husband? Apatow, who probably understands the obsessive loneliness of comics as well as anyone, also knows a thing or two about family life. The miracle of Funny People is that it brings these two entirely dissimilar, even antagonistic worlds into a single, resonant whole.

There is, of course, no previously mapped lead-in to a story involving humans in Ridley Scott‘s just-announced Alien prequel. The only back-story alluded to in Scott’s 30-year-old original came when mining-cargo voyagers John Hurt and Veronica Cartwright explored that huge abandoned spacecraft resting on that dark, howling planetoid and came upon that skeletal carcass of a gargantuan creature with an elephant trunk whose rib cage apparently been penetrated from within.

Honestly? I would love to see a subtitled film about a crew of 30-foot-tall life forms with elephant trunks dealing with an alien invasion. No humans, I mean. That would be very cool, very avant-garde. Joe Popcorn wouldn’t like it, of course, but a studio chief who looks to Joe’s wants and needs for movie inspiration needs to go on a sabbatical.

Screenwriter Jon Spaihts will write the prequel screenplay (his pitch to 20th Century Fox and Scott Free having triggered the project). And we’re all presuming that Scott will deliver a class-act feature but c’mon…this is just another lazy greed move-slash-brand reboot. The franchise has been re-thought, re-vamped, re-mined, re-action-figured (I own two black queens from the mid ’90s) and DVD box-setted to death.

By The People: The Election of Barack Obama, that long-reported-about doc partially funded by Ed Norton‘s Class 5 Films and directed by Amy Rice and Alicia Sims, will have a brief Oscar-qualifying run at Manhattan’s Sunshine Cinemas and L.A.’s Sunset 5 (no! not the Sunset 5! aagghh!) starting on 8.7 — i.e., a week from Friday. It will thereafter have its official big-time debut on HBO on 11.3. In other words, no press screenings or preferential press treatment of any kind? Okay, fine — I’ll be there opening day.

Vengeance producer-star Danny Trejo and director-writer Gil Medina “have started an aggressive distribution program that involves giving [their] film away for free,” reports Variety‘s Michael Fleming. They decided on the plan after co-funding the film but “finding no takers at [last November’s AFM,” he explains. In other words, the film is a huge problem to sit through.

“The effort is spearheaded by the ‘Vengeance Army,’ a group of kids who have so far received 74,000 orders. Those who give away the most DVDs — which are free, with $5.99 for shipping and handling — will be given substantial speaking roles in the sequel. About 40,000 people have responded. The rules are explained on the website Vengeancearmy.com. The top three finishers will join the production.”

3 Comments
“Rothman Up My Ass”

Congrats to Team Movieline for having scored and posted an apparently legit Ben Stiller in-house short that mocks the coarse, corporate and highly invasive mentality of 20th Century Fox. Stiller’s Red Hour Films has been on the Fox lot since last February, and one can deduce from the short (which I couldn’t figure how to embed) that Stiller isn’t entirely charmed by the vibe. 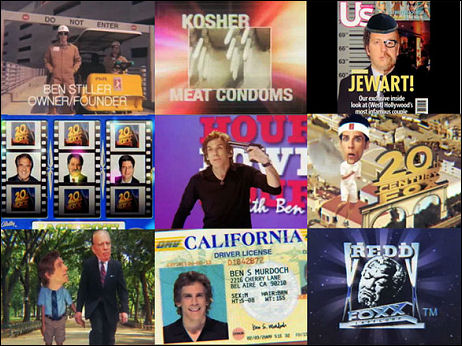 Stiller’s key money quote is as follows: “[Fox CEO] Tom Rothman is so far up my ass, he’d probably have to send Jim Cameron up there with one of his 3-D underwater cameras to pull him out, and he’d still be hangin’ on for dear life.”

A time-frame issue needs to be considered though. Stiller says directly before the Rothman line that the reason he spent “$800,000 on this film” is “to talk about Red Hour moving from this shitty office to its new home at Fox.” Then he says rafter the Rothman line that he’s “so excited to be coming [to Fox].” In other words the short was made either in anticipation of or concurrent with Red Hour’s move, and not based on day-to-day experience there.

“I’m going to go out on a limb here and assume [this] Ben Stiller video was not meant for public consumption,” writes Movieline‘s Seth Abramovitch, “but as is the case with sex tapes, if you don’t want your production company’s lightly incendiary and completely hilarious inside jokes to leak — don’t make ’em.

“Back in February, Stiller’s production company Red Hour Films left its home at DreamWorks and took up residence at 20th Century Fox. Having been provided this footage anonymously and with no background, we’re going to assume the short film you’re about to watch was circulated among Red Hour employees and close friends to celebrate the move. 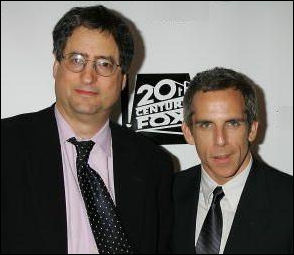 “Framed as a vintage” — i.e., ’60s or ’70s era — “industrial film, Stiller walks you through the transition, first by defining what Red Hour is: the producer of such quality entertainments as Zoolander, Blades of Glory, Tropic Thunder and…uh…Jaws, all funded by their proprietary ‘Kosher Meat Condom’ technology.”

In addition to announcing a maneuver by his lawyers to have himself legally become Newscorp owner Rupert Murdoch‘s adopted son, Stiller announces an intention to rename his company Red Foxx Entertainment. He then declares that the operation is grounded upon “charisma, personal magnetism and a deep yearning for huge quarterly profits.”

It would appear that Stiller was suffering through the usual pressure to generate popular/profitable features (“I’m gonna kill me!”) and decided to make the short as a creative emotional-venting exercise. I think it’s pretty terrific — the sort of thing that Stiller used to crank out during the glory days of the Ben Stiller Show, which ran on the Fox Network back in ’92-’93 but was cancelled after only 12 episodes.