4 Comments
Nothing Is Written

I’m out in the North Valley visiting Full-Scale Effects, a pyrotechnic effects house. A first-rate place, nice guys who know what they’re doing, a major go-to place for big explosions, etc. But it’s hell to stand around in 90-whatever degree heat with no shade or a.c. The sun melting, baking, beating down — it’s like being in Kuwait. 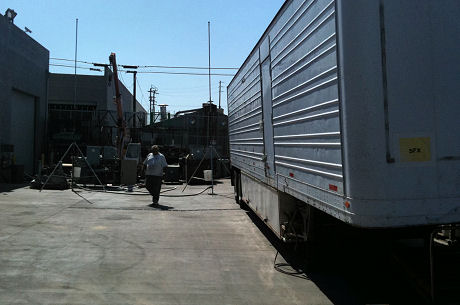 A just-posted tracking report says that G.I. Joe: The Rise of Cobra (Paramount, 8.7) has an average first-choice rating of 17 among all ages and quadrants. That’ll rise a bit between now and next Friday but for a film that has cost a huge amount to make and market, even a first-choice rating in the low 20s isn’t too good. The likelihood is for an opening somewhere around $25 million — perhaps a bit higher or lower. A mega-budgeter like G.I. Joe would need to take in at least $35 or $40 million the first weekend to look respectable, no?.

A moment of forced intimacy this morning at Legacy between a latex of Robert Downey‘s Tony Stark, created for Iron Man 2, and a participant in today’s InFilm tour.
July 30, 2009 1:31 pmby Jeffrey Wells

A friend confides that Vanity Fair “is doing a story on the Moneyball fiasco.” He doesn’t know who the writer is but says he’s “heard about the article from a friend who was on the project. Should be very interesting. My understanding is that the angle is pro-Soderbergh and will detail how he was screwed over. Screwed by Amy Pascal, Bryan Lourd and, yes, Brad Pitt. Soderbergh was certainly not a creative auteur run amok on the studio’s dime. The email trail from Pascal to Soderbergh makes it very clear that she was fully aware of what the film was and was excited and into it until the end.”

A Vanity Fair source said he couldn’t determine if the story was in the works or not. A call to VF spokesperson Beth Kseniak was unreturned as of 3:45 pm LA time.

This morning the InFilm group drove out to sun-baked San Fernando to visit Legacy, the model and digital effects shop created by the late, great Stan Winston. The biggest full-size device (the 22 foot tall one with the girl posing under it) was built for Avatar. James Cameron is calling it an “amp suit.” I know that it’s primarily deployed in the film by Stephen Lang‘s militaristic gung-ho villain. The other models more or less speak for themselves.

Vanity Fair.com’s Julian Sancton asks three Funny People guys — Judd Apatow, Seth Rogen and Jonah Hill — about the terrors and rigors of standup comedy. He tries to answer the question of why some jokes kill and some jokes die. “There’s truly a magic to why we respond to certain people and why they become immensely popular around the world,” Apatow says. “It doesn’t matter how mow many times you work on your act. That [special appeal] needs to be built into your genetic code.”

I’ll never attend the Venice Film Festival because I can’t afford it and because it always overlaps with the Toronto Film Festival. But the usual pattern is for the hot Venice films to show up in Toronto so let’s see what goes. Anyway, here’s a mostly complete festival slate:

Out of Competition: Oliver Stone‘s South of the Border, a Hugo Chavez documentary; Grant Heslov‘s The Men Who Stare at Goats, Joe Dante‘s The Hole and Steven Soderbergh‘s The Informant!.

Funny People is “a real movie [with] carefully written dialogue and carefully placed supporting performances,” Roger Ebert notes, “and it’s about something. It could have easily been a formula film, and the trailer shamelessly tries to misrepresent it as one, but Adam Sandler‘s George Simmons learns and changes during his ordeal, and we empathize.

“The film presents a new Seth Rogen, much thinner, dialed down, with more dimensions. Rogen was showing signs of forever playing the same buddy-movie co-star, but here we find that he, too, has another actor inside. So does Jason Schwartzman, who often plays vulnerable but here presents his character as the kind of successful rival you love to hate.

“Rogen and Leslie Mann find the right notes as George’s impromptu support group. The plot doesn’t blindly insist that George and Laura must find love; it simply suggests they could do better in their lives. [And] Eric Bana makes a satisfactory comic villain. There is a rolling-around-on-the-lawn fight scene that’s convincingly clumsy, and Mann mocks him with a spot-on Aussie accent (not the standard pleasant one, more of a bray).

“Apatow understands that every supporting actor has to pull his weight. The casting director who found him Torsten Voges to play George’s doctor earned a day’s pay. Voges is in some eerie, bizarre way convincing as a cheerful realist bringing terrible news — miles better than your stereotyped grim movie surgeon.

“After an enormously successful career as a producer, this is Apatow’s third film as a director, after The 40-Year-Old Virgin and Knocked Up. Of him it can be said: He is a real director. He’s still only 41. So here we go.”