Everett Sloane‘s finest acting moment was in Citizen Kane when his “Mr. Bernstein” character talked about the vagaries of memory. “A fellow will remember a lot of things you wouldn’t think he’d remember,” he said after William Alland‘s reporter dismissed the likelihood that Charles Foster Kane might recall a minor anecdotal event that had happened decades earlier.

“You take me,” Sloane/Bernstein began. “One day back in 1896 I was crossing over to Jersey on the ferry, and as we pulled out there was another ferry pulling in, and on it was a girl waiting to get off. A white dress she had on. She was carrying a white parasol. I only saw her for one second. She didn’t see me at all. But I’ll bet a month hasn’t gone by since that I haven’t thought of that girl.”

We all have a few odd but lasting moments that have stayed in our heads. But the most interesting ones are those that don’t (or didn’t) involve someone we once saw and felt attracted to but never made a move on. That’s because they all refer to the same thing. The ones that are worth mentioning are those that have lingered for decades but defy interpretation as to why. But which contain or reflect some sort of metaphor that obviously matters.

Here’s one from my late teenage years. It happened on a late summer night in Wilton, Connecticut. There were two or three of us drinking beer on a bench in a small green area next to Route 7, the town’s main drag. And we were just gazing out at the road when two guys we knew drove by in a souped-up something or other, going 45 or 50 mph. We knew it had to be one of our friends because respectable citizens didn’t wail around town in muscle cars at midnight.

Anyway the guy riding shotgun — his name was Chip — opened the door, leaned down and dragged a beer can along the pavement as they sped by. And it created a small but beautiful shower of sparks. I don’t recall reacting all that strongly but I remember the shared contentment the three of us felt from watching this. “That was good,” one of us said without making a big deal out of it. And that was it. But I’ve never forgotten that lightshow. And I’ve never wondered why. It’s just a keeper and that’s that.

Tomorrow’s JFK-to -LAX flight leaves at 8:30 am, requiring a pre-dawn wakeup. A few errands to attend to when I hit town and then a 7 pm screening of Funny People , which I’m told is an in-and-out, up-and-down, 145-minute ahem thing. In a respectable/honorable way, some feel. (Universal guy to journalist friend: “It’s real, and some people don’t want real.”) Then then I’m driving down to San Diego and Comic-Con around 10 pm. I’ve rented a crappy little Craig’s List cottage with a futon on the floor.

There are all kinds of parties and events, and starting early is key. (I wonder what time the press room opens?) There’ll be a New Moon press conference at 9:30 am Thursday in a Gaslamp-area hotel. And I’ve already reported that I’m safely okay to attend the Avatar presentation, which happens Thursday afternoon from 3 pm to 4:125 pm. There’s an Entertainment Weekly poolside soiree around dinner hour. And a private little Peter Jackson gathering for 40 or so fans on Thursday night (9:30 pm to 11 pm) so the Great Genius can expound about District 9, The Lovely Bones, Tintin and The Hobbit . There’s also an Avatar gamer party going from 8pm to midnight.

The inside-the-big-hall events are well covered in this Luke Y. Thompson/ Deadline Hollywood Daily summary. I’m just going to play it like it lays. Expecting a lot of chit-chat, cruise-throughs, hey-ho’s, photos and videos. One trap I’m not going to fall into is partying too much in the evenings. I’m planning on filing in Starbucks for hours on end.

In any event, HE will be unrefreshed and all-but-dead starting tomorrow morning and lasting until God knows when tomorrow afternoon.

I’m so delighted with the new Criterion Repulsion Bluray (out 7.28) that I’ve played it twice start to finish, and I only opened the package last night. I didn’t sit there like a bowling pin and literally watch it twice. I watched it once and I ran it a second time as a kind of white-noise sideshow in the corner of my eye, tuning in and out and half-listening as I worked on the column.

It doesn’t seem to have been de-granularized in the slightest and I still love it. Just goes to show that people like me are fine with a natural grain look as long as it’s been done right. For all I know the grain has been toned down, but it looks amazingly sweet. It’s there but it’s fine. The monochrome tones are pleasingly vivid and soothing, and the sharpness of the picture is just right in an unforced and untweaked way.

The Ugly Truth (Sony, 7.24) is about a shrill and tightly-wrapped morning TV producer (Katherine Heigl) who decides to take guidance lessons from a sexist cock-of-the-walk talk-show guy (Gerard Butler) about how to land a prospective new boyfriend. Which gradually leads, of course, to Hiegl falling for Butler and vice versa and the other guy getting the blowoff. It was all there in the trailer.

I like Butler but he didn’t have a chance with this steaming pile of uptown fantasy chick-romance horseshit. The crude craft and lack of finesse make it a stunningly plastic, relentlessly boorish thing to sit through. It doesn’t wear its loathsomeness with pride as much as…I don’t know, cluelessness. It is arch, syrupy, cliche-ridden and girlish in the worst sense of that term. The whorish plotting and half-formed, rough-draft dialogue are just awful.

The Ugly Truth doesn’t even try to work with recognizable human behavior or tendencies or whatever. There seems to be a determination on the part of director Robert Luketic and the screenwriters (Nicole Eastman, Karen McCullah Lutz and Kirsten Smith) to studiously avoid any depictions of human behavior that might remotely resemble what passes for believable behavior among real people dealing with real situations.

The problem is that there’s a whole generation of filmmakers out there who believe that once a film is “just a comedy” that this amounts to a license to show people cavorting several miles outside the boundaries of realism and credibility and recognizable human genetics because…it’s a comedy! And it’s cancer. It’s pure cancer afflicting and tumorizing a once-respectable form. Billy Wilder, Ernst Lubitsch, Leo McCarey and David O. Russell would be bent over and vomiting on the floor after watching this thing.

Comedies are nothing unless they’ve been imagined and written like Hamlet — they have to be about serious hurt, real fears, genuine anxiety — and then lifted and contorted and pratfalled into humor with agility and spirit and split-second timing.

The Ugly Truth is just repellent sitcom crap aimed at younger women unencumbered by taste buds or judgment of any kind, and who are therefore easy lays. I understand “crazy” and I get “everyone is on drugs”…but you first have to realistically invest in and make people believe in the reality of what’s being said, done, decided upon and so on. Luketic and his screenwriting trio have totally ignored this responsibility. 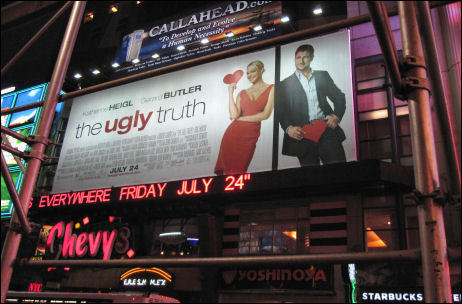 Heigl hasn’t done herself any favors with her performance. She plays it pinched and highly strung and neurotically unappealing for the most part. You could put a nickel between her butt cheeks and it would never drop to the floor. She touches emotional bottom towards the end — I’ll give her that.

Butler has a kind of crude mannishness that comes across decently here and there, but his loutish American accent — the same one Mel Gibson began using in the mid ’80s with lines like “gimme a hot dawwg with rehhlish!” — sounds forced and ungenuine. He needs to stop trying to be American and speak in his own native Scottish accent, which is quite appealing.

Every bullshit cliche in the big-studio, high-adventure, CG-crapola pantheon, packed into one self-regarding, thoroughly self-amused franchise. It’s Indiana Zorro 007 Jones in 19th Century London, for God’s sake. It gave me instant cardiac arrythmia. I feel as if I’ve already sat through two screenings, been to the junket and watched it on a coast-to-coast flight. It’ll probably do extremely well with the chumps. I’m betting right now that the pre-disposed Drew McWeeny will cream all over it.

With Universal’s Despicable Me (7.9.10), Hollywood has produced another mainstream animated feature with another morbidly obese boy in a prominent role. (Or in the trailer, at least.) This follows the precedent begun by Up‘s “Russell” character, a morbidly obese young boy scout voiced by Jordan Nagai

Meaning that once again Hollywood is presenting obesity as a normal and accepted adolescent condition, certainly as far as American culture is concerned. Let’s imagine that instead of one out of three American kids being obese or overweight they were instead hardcore heroin users. If this was the case would a mainstream animated feature show a typical American family kid stumbling around and getting off and scratching his face and eating candy bars? I doubt it.

The film was produced by Cooper, Judy Cairo, Rob Carliner and Robert Duvall. The film has an original soundtrack by T-Bone Burnett.

“Bad meets Jean Craddock (Gyllenhaal) when she comes to interview him and they fall in love. Her little boy, Buddy, inspires Bad to search for his own long-lost son, but there’s no happy ending there. And when Bad, hungry for a drink, loses Jean’s son, things take a downturn, despite Bad’s fling with AA. This first novel has the authentic patter and ambience of those seedy one-night-stands, but the plot is thin and the ending is very downbeat.”

Compare this to the Fox Searchlight press release synopsis: “An aging country music legend wrestling with his loss of fame at the hands of younger protégé. Struggling to make ends meet playing one small gig to the next in the twilight of his career, he finds unlikely inspiration in a small town reporter (Gyllenhaal) and her young son.”