Give credit where due and acknowledge a knockout idea. The guy who suggested a Top Ten, American Idol-like framework on the Oscar telecast — a mad brush stroke of a concept– is video maestro Jamie Stuart, i.e., “mutinyco.” Here’s how he put it at 11:59 am today on The Hot Blog: “They need to treat the nominees as a top 10 list and not ‘nominees.’ And then structure the broadcast around the top 10 like American Idol and gradually count down the vote tabs from #10 to #1 throughout the program to create suspense.”

Is anyone listening? Have ratings not been a problem with the Oscar telecast in recent years? Not enough Eloi viewers, etc.? Well, the show would be through the roof if they went with this idea. On top of which it would be a huge amount of fun. Tom Sherak…seriously! David Poland showed his colors when he called the idea “slightly creepy”

HE is looking for a special Telluride friend or two or three. Last year’s Telluride friend won’t be attending so get in touch. For some reason I’m not feeling all that jacked about some of the films expected to play there. Jason Reitman‘s Up In The Air , which will make the trek, is feeling more and more like a fait accompli thing. The buzz on The Road has been on the “hmmm, yeah, ahem” side. Werner Herzog‘s hoot movie — Bad Lieutenant: New Orleans Port of Call — will, I’m told, play Telluride instead of My Son My Son, What Have Ye Done? Ditto Lone Scherfig‘s An Education. What else? 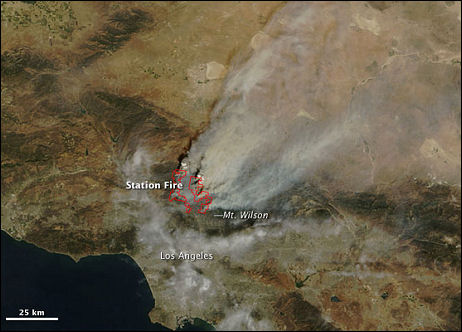 I’d savor the fall for as long as possible, and then pull the chute and angle myself so I land in Venice or Mar Vista. And then I’d write a story about it. Seriously — I wish I was around to smell that ashy burnt wood-and-sagebrush scent and see the billowing smoke clouds.

All the Luddites and dead-sea-scrollers who were arguing yesterday in favor of keeping the flying monkey and Scarecrow wires visible in Warner Home Video’s forthcoming The Wizard of Oz Blu-ray (or at least keeping some kind of visible-wires edition of the film in a vault somewhere) can fold up their tents and go home. I spoke yesterday with WHV senior vp George Feltenstein and he confirmed what Hitfix’s Drew McWeeny passed along yesterday in the HE comments section, which is that the wires have been digitally erased. 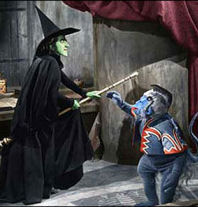 Before making the final call, Felstenstein said he went to resoration guru Robert Harris for advice, and that Harris’s basic mantra was that “if 1939 audiences didn’t see the wires when they saw the film in theatres, then present-day audiences shouldn’t see them on the Blu-ray.”

And 1939 audiences didn’t see the wires due to the state of projection technology and the three-strip Technicolor alignment process being what they were some 70 years ago, along with the general coarseness of 1939-era film stock.

“To be precise,” Harris explained this morning, “what matters is to recreate the look and texture of the original film, as seen by 1939 audiences. While by scanning original negatives we do get an image of slightly higher resolution, it’s important to make certain that the extra detail doesn’t expose things that were never meant to be seen.”

The Oz Blu-ray will be out on Tuesday, 9.29, following a series of special promotional screenings across the country including a special New York Film Festival showing on Saturday, 9.,26.

I asked Feltenstein why Warner Home Video’s “Murderer’s Row” trio — The Wizard of Oz, North by Northwest and Gone With the Wind (the last two of which will be available by mid November) — were scanned in 8K when 4K is considered to be as good if not better than 35mm film resolution-wise. “For the future,” Feltenstein said. “We want to be ready for the next expansion or upgrade in high-def viewing, so we won’t have to go back and re-scan them again.”

We both agreed that (a) it’s an essential thing for all large-format films to find their way onto Blu-ray sooner rather than later (a no-brainer), (b) it would be a welcome thing for Paramount Home Video to one day re-master Byron Haskin‘s War of the Worlds (1953) with the wires holding up the Martian space ships digitally erased (ditto), and (c) that it’ll be great when other Alfred Hitchcock films (like Vertigo especially, having been filmed in large-format VistaVision) get the Blu-ray treatment also.

Feltenstein — gracious, highly spirited, obviously super-bright– said he’s a daily HE reader, and that I should feel free to get in touch any time. Great!

It’s awfully nice to have a couple of real film guys — serious Catholics, I mean — back on the At The Movies beat. So who will be the Roger Ebert (i.e., the cerebral, highly knowledgable know-it-all) and who will be the Gene Siskel (the “yes but” guy who comes from a gut place as well as a head place and will sometimes say “naah, not buying it, this is bullshit”)?

My sense is that both A.O. Scott and Michael Philips are Genes at heart. They’re both trying to emphasize their Roger aspects right now, but it’ll eventually boil down to a Gene vs. Gene thing. Or maybe that’s just what I want to see. I know that gut skepticism is generally more fun to hang with than impassioned dweeby cinephile musings.

My only concern (and I’m not trying to be an asshole) is that Scott’s hair is too closely clipped. He needs to exude a little more of that slightly frazzle-haired coffeehouse poet thing — more suede and jeans, less starch in his shirt, maybe a toke or two of pot.

So what happened to the video? It played when I first posted and now it’s saying it’s no longer available. No, wait…it’s back. What?

You have to get to those other things — ad pitches, Toronto details, Apple/iPhone crap — you’ve been meaning to get to for the last two or three weeks. So you get into this stuff while tapping out the usual column items and stories, only fewer than usual.

And before you know it it’s gotten to be 3:30 or 4 pm and the screening you were going to attend has been cancelled and you really need to take the garbage out and go to the hardware store and print out a document and stuff like that. Then a phone interview happens — good stuff, good fellow, lovely speaking.

But soon after that you turn around and all these things have happened in the online movie world that you haven’t noted or commented upon. So you try and get into this stuff and somehow…ahhh. Maybe because the ad/Toronto/iPhone stuff is still dangling and throwing off sparks like a loose power wire. The day settles down, HBO tries to do what it can and the good old nutso-anxiety currents are pulsing. And then sleep somehow slips in and takes over around 11 pm or so. At least I’m not an insomniac.

And then you have a nightmare about some video of you doing something foolish or intemperate going up on YouTube and your life imploding big-time, and then you wake up and realize it’s okay. You’re so relieved you’re almost weeping. And then you dream about seeing Mick Jagger on Broome Street with a gray overcoat and a thick head of gray hair. Then you start to really wake up at 5 am and the first thought of the day is “uh-oh…my bad.”

So you half sit up and check out the latest Twitters and then dawn begins to break and it’s back to square one. I feel like I’m in a Roman Polanski film. No, not The Tenant. The Pianist, I’m thinking. With maybe a little Repulsion thrown in.