Wizard of Oz balloon being gassed up outside Manhattan’s Tavern on the Green — Thursday, 9.24, 6:10 pm. Here’s a still of same with a truer sense of light.

1. Werner Herzog’s Rogue Film School will be in the form of weekend seminars held by Herzog in person at varying locations and at infrequent intervals.

2. The number of participants will be limited.

3. Locations and dates will be announced on this website and Werner Herzog’s website: www.wernerherzog.com approximately 12 weeks in advance.

4. The Rogue Film School will not teach anything technical related to film-making. For this purpose, please enroll at your local film school.

5. The Rogue Film School is about a way of life. It is about a climate, the excitement that makes film possible. It will be about poetry, films, music, images, literature.

6. The focus of the seminars will be a dialogue with Werner Herzog, in which the participants will have their voice with their projects, their questions, their aspirations.

7. Excerpts of films will be discussed, which could include your submitted films; they may be shown and discussed as well. Depending on the materials, the attention will revolve around essential questions: how does music function in film? How do you narrate a story? (This will certainly depart from the brainless teachings of three-act-screenplays). How do you sensitize an audience? How is space created and understood by an audience? How do you produce and edit a film? How do you create illumination and an ecstasy of truth?

8. Related, but more practical subjects, will be the art of lockpicking. Traveling on foot. The exhilaration of being shot at unsuccessfully. The athletic side of filmmaking. The creation of your own shooting permits. The neutralization of bureaucracy. Guerrilla tactics. Self reliance.

9. Censorship will be enforced. There will be no talk of shamans, of yoga classes, nutritional values, herbal teas, discovering your boundaries, and Inner Growth.

10. Related, but more reflective, will be a reading list: if possible, read Virgil‘s “Georgics”, Ernest Hemingway‘s “The Short Happy Life of Francis Macomber,” “The Poetic Edda,” translated by Lee M. Hollander (in particular “The Prophecy of the Seeress”), Bernal Diaz del Castillo‘s “True History of the Conquest of New Spain.”

11. Follow your vision. Form secretive Rogue Cells everywhere. At the same time, be not afraid of solitude.

Earlier today I was told a perverse relationship story that allegedly happened near the start of filming of Steven Soderbergh‘s Kafka, which was shot in Prague in 1990. The original source was Soderbergh, I’ve been assured, but since I’m hearing this second-hand please take it with a grain.

La Femme Nikita star Anne Parillaud had been cast as Gabriela, the female lead/significant girlfriend of Franz Kafka (Jeremy Irons ). Filming had just begun and she and Irons went out to dinner together, as actors just starting to work together often do. And Parillaud went back to Irons’ hotel that night, and presumably didn’t sleep much.

The next morning on the set Soderbergh led her over to a corner and says he’s sorry but she’s not going to work out because a significant party has complained about her French accent — Gabriela is supposed to be a Prague girl, born and bred — and that she’s going to have to be replaced. (Theresa Russell was soon after hired.) “But who…who has complained?,” the shocked Parillaud asked Soderbergh. Jeremy Irons, he answered.

In other words, her dismissal had not only been called for by Irons but, she later found out, locked in a day or two before. Meaning that Irons knew that if he wanted to “say goodbye” to Parillaud he had to make his move before she was told the bad news, and he probably knew Soderbergh would be telling her the next day or certainly very soon. So it was basically a “move it or lose it” situation before Parillaud learned the facts.

Even if this isn’t true, it’s a great story. The more likely truth, I’m guessing, is that Irons and Parillaud had already gotten started before the decision was made and that Irons didn’t have the courage to tell her what he was feeling and saying as things went along. Either way I’ve heard some cold-hearted seduction stories before, but this is a classic.

This was on the wall of a Citibank I happened to visit yesterday.The words are hardly novel or earth-shattering, but for some reason I felt slightly better after reading them. 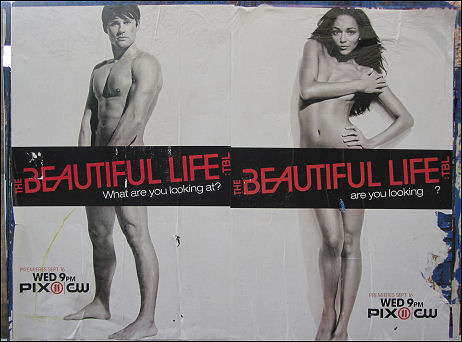 Why would anybody anywhere want to watch an online TV series that uses a poster like this? What kind of person would look at it and say, “Wow…a guy pissing. I need to see that!” 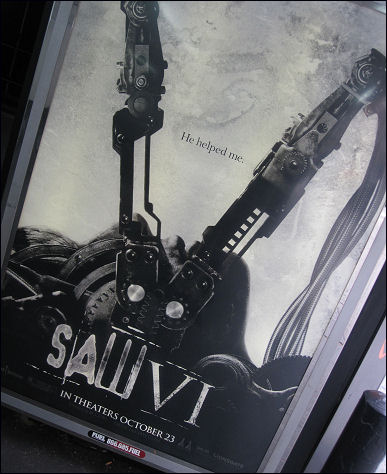 I was a “permalancer” for People magazine for two years (’96 to ’98). At times the climate at People was the most miserable I’ve ever experienced. Except for my short tenure at Entertainment Tonight, that is, which Iasted two or three months during the summer of ’98. Absolute hell, in part because I had to be at work at 5 am and in part because of the acutely political competitive-female vibe under boss lady Linda Bell Blue.

Will they fire me next month, next week…tomorrow? Why are people always speaking in hushed tones behind closed doors? Is the work I’m doing of any value to anyone? Will I always have to wake up at 3:45 am? Is it too late to learn a new trade?

Ned Price, Warner Home Video’s vp of mastering for technical operations, delivering this morning’s opening remarks about the steps taken to render the new Wizard of Oz Blu-ray, which will street on 9.29.

I spent some time earlier today at Warner Home Video’s Wizard of Oz Blu-ray junket. I’ve already discussed it twice — on 9.18 and 9.19 — and said (a) it’s the sharpest, best looking, most luscious Oz yet even though (b) the grain structure is too vivid. I’ll soon be shooting a big Wizard of Oz aerial balloon in Central Park, and then it’s off to the Coen Brothers A Serious Man at the Ziegfeld plus an after-party. 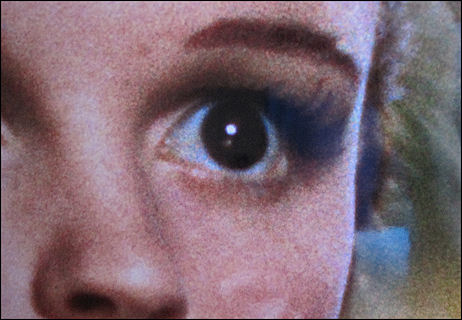 I shot this two inches away from a huge Wizard Of Oz frame blowup inside a 2nd floor Essex House suite where the Oz Blu-ray junket took place from 11 am to 1 pm. 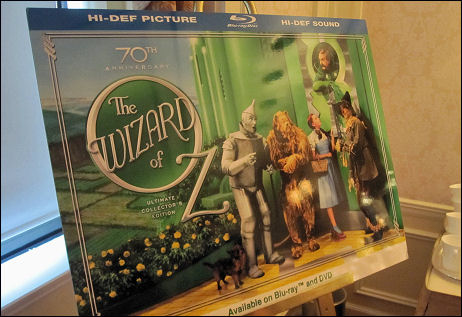 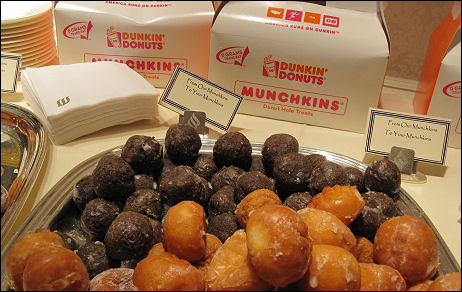 The appearance of Munchkins donuts instead of the usual scrambled eggs, french toast and fresh fruit indicated a budgetary cautiousnesss. 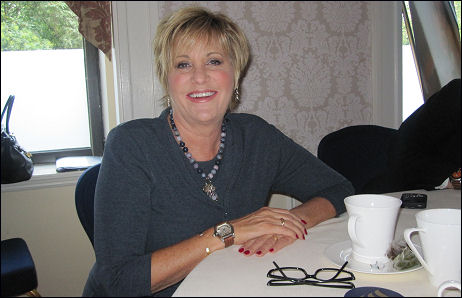 Singer-actress Lorna Luft, daughter of Judy Garland, who will perform this evening at a special Wizard of Oz Tavern on the Green event. 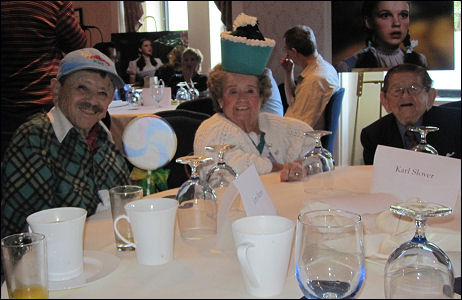 Last night I managed to attend a hard-to-penetrate screening of Oliver Stone ‘s South of the Border at Lincoln Center’s Walter Reade theatre. Being the ardent lefty that I am and always will be, I was somewhat pleased and even comforted by what I saw. Is Stone’s documentary a hard-hitting portrait of South American political realities and particularly the reign of Venezuelan president Hugo Chavez? No, but it’s a perfectly reasonable and welcome counter-view to the U.S. mainstream-media Kool-Aid version, which has always been reactionary and rightist-supporting and hostile to nativist movements. 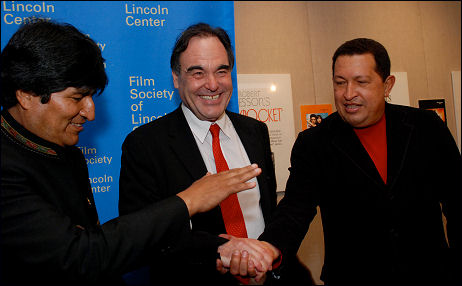 And I was surprised by two things. One was the attendance of the film’s leading light, Venezuelan president Hugo Chavez, as well as Bolivian president Evo Morales. The other was the fact, contrary to certain slanted reactions to a recent Venice Film Festival screening, that South of the Border is a good deal more than just a friendly (i.e., non-condemning) portrait of Chavez. It is actually a group portrait of all the left-leaning South American heads of state whose views represent a political sea change.

All my life (or at least until recently) the leaders of South American countries have been largely run by right-leaning frontmen for the oligarchs (i.e., the upper-crust elite), which have always been in league with U.S. interests and the coldly capitalist, market-driven finaglings of the International Monetary Fund. And the lower classes have always had to eat bean dip.

But since the turn of the century a turnabout has begun to happen with the arrival of a generation of Bolivarian (i.e., nativist, anti-outsider) leaders with skeptical or contrarian attitudes about US manipulations — Venezuela’s Chavez, Bolivia’s Morales, Brazil’s Lula da Silva, Argentina’s Cristina Kirchner (along with her husband and ex-President Nestor Kirchner), Paraguay’s Fernando Lug, and Ecuador’s Rafael Correa.

So now there are six Latin American presidents of a similar mindset, and seven if you add Cuba’s Raul Castro. That’s pretty significant considering that much of South and Central America had been under the control of a series of U.S.-supporting, IMF-funded rightist governments for most of the 20th Century.

So it’s a pleasure and a relief to see not just a fair-minded, turn-the-other-cheek film about Chavez — a man I’ve always admired and sympathized with since seeing The Revolution Will Not Be Televized. And I don’t care what the HE right-wingers are sure to say about this because they don’t want to get it. Chavez has been at war with Venezuelan right-wing interests (including the TV stations) for most of the last seven years, and if he sleeps with both eyes closed for more than two hours he’ll be unseated. He isn’t perfect — who is? — but at least he belongs to Venezuela and Venezuela alone.

Stone, Chavez and Morales conducted a q & a following the film with Film Society of Lincoln Center chief Richard Pena moderaing. A cocktail gathering happened in an adjacent room. I wasn’t invited to that part of the event and I didn’t care.

“In January 2009, I travelled to Venezuela to interview President Hugo Chavez. Once we began our journey, however, we found ourselves telling a larger and even more compelling story, which we call South of the Border. 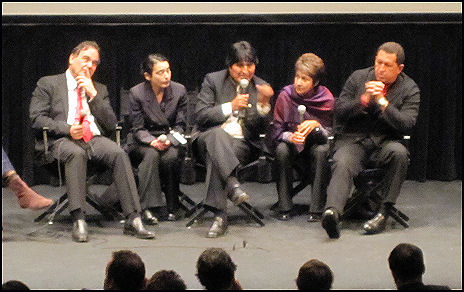 “Leader after South American leader seemed to be saying the same thing. They wanted to control their own resources, strengthen regional ties, be treated as equals with the U.S., and become financially independent of the International Monetary Fund. Based on our experiences in Iraq, Americans need to question the role of our media in demonizing foreign leaders as our enemies. The consequences of this can be brutal.

“This is a continuing story. It is going on right now with Hugo Chavez in Venezuela. Hopefully, in our film, you’ll get to hear a far different side of the ‘official’ story.”