Here we go again…The Road, I Am Legend, Terminator 4, etc. A loner survivor, charred remnants of an extinct civilization, marauding gangs of zombie goons. Beware any plot synopsis that involves “protect[ing] a sacred book that holds the secrets to saving humankind.” As well as purple narration that uses lines like “something-odd years ago, the war tore a hole in the sky.” The Book of Eli, starring Denzel Washington and directed by the Hughes brothers, opens on 1.10.10.

On 9.21 a Blu-ray disc of Rudolph Mate‘s The Black Shield of Falworth (’54), the medieval costumer in which Tony Curtis allegedly said “yondah lies the castle of my fodda,” came out on Amazon.uk. Except the line isn’t in the film. The belief that Curtis spoke it “clearly derives from American snobbery about Curtis’s [New York] origins,” says the BSOF Wikipedia page. “And yet Curtis did say a similar line in Son of Ali Baba (’52) that reads, ‘This is the palace of my father, and yonder lies the Valley of the Sun.'” 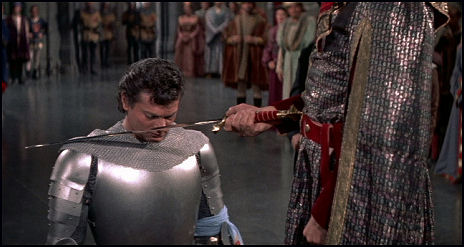 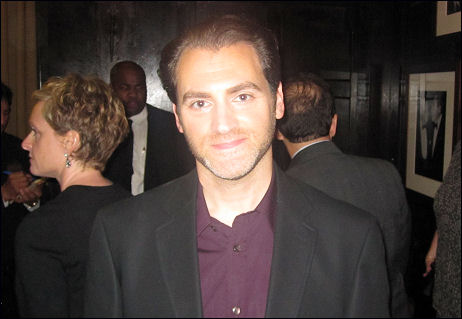 A Serious Man star Michael Stuhlbarg, whose desperately rational performance is easily one of the year’s best, at last night’s after-party at the Friars Club. 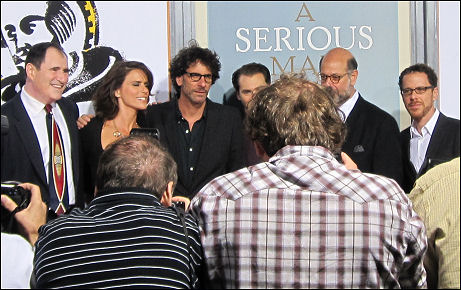 I didn’t even see Aaron Schneider‘s Get Low at Toronto, but it was clear early on that it had an impassioned critic fan base and that Robert Duvall‘s lead performance was being seen as award-worthy. But Sony Pictures Classics, which acquired it, will not be releasing Get Low this year and is planning a mid-2010 release.

So what’s happened to Michael Hoffman‘s The Last Station distribution-wise since it drew enthusiastic notices (particularly for Christopher Plummer‘s allegedly Best Actor-worthy performance as Leo Tolstoy) at the Telluride Film Festival nearly a month ago? I’ll tell you what’s happened — nothing. No deal, I mean, because the rights sellers are asking too much. Actually way too much, according to one source.

The other night I asked a hypothetical question of an acquisitions veteran who knew the score. If, in your estimation, the realistic market value of The Last Station is five dollars, what are sellers asking for? Fifteen, I was told. Included in the high price is an ironclad pledge to launch a Best Actor campaign for Plummer as well as Helen Mirren for Best Actress and somebody else (James McAvoy or Paul Giamatti for Best Supporting?).

An additional complication is that while The Last Station may sell tickets to the over-40 crowd, it’s a very linear and straightforward film, which is another way of saying it hasn’t been regarded by most critics who’ve seen it as being all that wise or hip. So there’s that as well.

The only slightly “off” element surrounding last night’s A Serious Man premiere was that it was happening under the auspices of the Friars Club Comedy Film Festival. This suggests that Man traffics in a form of rollicking Milton Berle schtick when in fact it’s one of the greatest and darkest “no-laugh funny” movies of all time. It’s undeniably brilliant and masterful but almost all the humor is of the LQTM (“laughing quietly to myself”) variety. Which is actually the kind of humor I prefer. 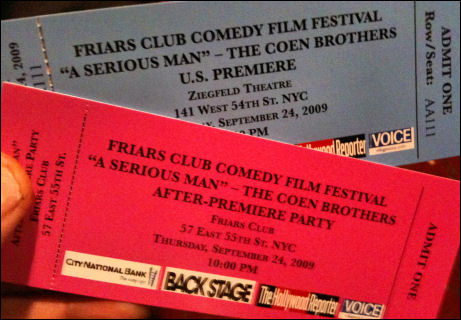 I spoke to Michael Stuhlbarg, who truly needs to be in a Best Actor running for his performance as the relentlessly earnest and reasonable Larry Gopnik, and to Amy Landecker, who stands out in the film as Gopnik’s next-door neighbor — a kind of Jewishy Marlene Dietrich with a thing for pot and nude sunbathing.

Jonathan Mostow‘s Surrogates is the likely weekend champ among the new wide releases, according to today’s tracking. Surrogates has a First Choice Open & Release rating of 18 vs. an 11 for Fame and a 7 for Pandorum. The best films, as is often or usually the case, are among the limited or regional releases — Scott Hicks‘ The Boys Are Back (with a 70% Rotten Tomatoes rating), The Other Man, I Hope They Serve Beer in Hell, and Stanley Tucci‘s Blind Date. I won’t even see Brief Interviews With Hideous Men until this evening.

Please forgive the sluggish postings. I’m looking around for the right place to move to and most of you presumably know what an all-consuming, tangled-up process this can be.

Breakdown (’97), an above-average Kurt Russell thriller, convinced me that its director, Jonathan Mostow, was a skilled and disciplined helmer of high-end Bs. I was doubly persuaded three years later when his next, U-571 (’00), came along. And then my enthusiasm waned slightly with Terminator 3: Rise of the Machines (’03). Now he’s back after a six-year lull with Surrogates, a cyber-replicant thriller with Bruce Willis that opens today.

The critical reaction is mixed (50% at Metacritic, and 46% among the RT hoi polloi) but the premise is terrific and Variety‘s Todd McCarthy is calling it “intense and eerily plausible.”

Mostow’s “smart speculative suspenser imagines a time when people can live through ideal versions of themselves while they sit wired up at home,” he notes. “Effective science fiction often reflects the preoccupations and anxieties of the moment when it is made, and Surrogates, based on a graphic novel by Robert Venditti and Brett Weldele, certainly speaks to the way people today increasingly live on their computers and other electronic devices and project themselves into the world through them.

“The idea that one day we may need to choose between living life directly or virtually provides the dramatic tension for the script by Mostow’s Terminator 3 collaborators John Brancato and Michael Ferris.

“Surrogates distinguishes itself from countless other thematically overlapping films by being not about robots run amok, but about humans seduced by the easy life; humanity here has ‘advanced’ so far that it has become subordinate to its substitute.

“As a cautionary sci-fier, it’s not all that far removed from such classics as The Day the Earth Stood Still and Invasion of the Body Snatchers, and if eyebrows are raised over the issue that Surrogates runs only 88 minutes, it’s worth remembering that the those two ’50s originals ran just 92 and 80 minutes, respectively.