To me it’s just more of the same improbable, nobody-could-ever-survive-this-in-real-life action-movie horseshit. I stopped even half-believing what I was seeing before the guy was up the tree. Jean-Luc Godard would spit on it.

I was puzzled after reading Mark Olsen‘s 11.8 “Indie Focus” column this morning. The focus was Sebastian Guitterrez‘s Women in Trouble, an apparently sexy, allegedly Pedro Almodovar-esque indie anthology that will open in New York and Los Angeles on 11.13. It costars Carla Gugino, Adrianne Palicki, Marley Shelton, Simon Baker, Elizabeth Berkley and Josh Brolin.L.A. Times columnist and screening series host Pete Hammond, who knows everyone and sees everything) telling me they’d never heard of Women in Trouble, much less received an invite themselves.

I eventually learned that the film is being repped by Mike Rau of 42West. There have been one or two select screenings in Los Angeles, apparently. (I’m not sure about NYC showings.) The responses, I’m told, have been moderate to cool. A guy I spoke to who’s seen it says “it’s not bad…there’s nothing horribly wrong with it, but it’s not great either.”

Screen Media is a kind of “for hire” vanity distributor, I gather. You pay them, they put it out there, handle the ads and whatnot.

I’m a Gugino fan (especially after seeing her in Desire Under The Elms) and really wouldn’t mind seeing this. Any movie with girls running around in underwear gets at least half a pass from this quarter. Okay, not really but underwear is…you know, a pleasant thing.

A long while ago I accepted the notion of Samantha Morton, 33, being the Daniel Day Lewis of younger actresses. She’s a very high-calibre, high-throttle type who can’t help but drill deeply and maybe go a little mad (or madder) with each new performance. Which is what makes her good. But I did mutter “uh-oh” when she first came on-screen in The Messenger. In fact, anyone who’s seen it and claims he/she didn’t say “uh-oh” is probably lying. 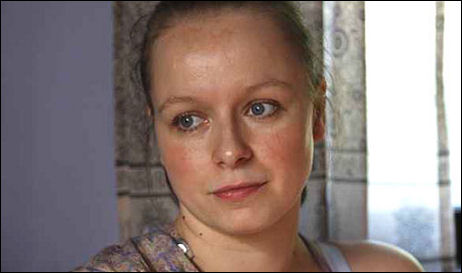 Samantha Morton in The Messenger

The truth is that Morton has been…well, physically changing as the years go by, and I’m now starting to think of her, very respectfully, as more of a Phillip Seymour Hoffman type than a DDL, if you get the drift. Is there any way to mention this issue without sounding like a weight Nazi?

I love that Morton hasn’t done a Kate Bosworth or Kate Hudson to herself, and that she seems more or less indifferent to the psychology that Bosworth/Hudson seem to have responded to. I’m not harping on this issue. I’m just saying Morton is looking a little different these days….that’s all. She’s moving in a certain direction.

This weekend Lionsgate’s Precious averaged $100,000 per location in 18 locations — an indie-level record. An Oprah Winfrey-propelled mix of upscale black-and-white audiences (plus middle-scale and downscale black crowds) resulted in a $1.8 million Friday-to-Sunday gross.

The Robert Zemeckis/Jim Carrey/3D A Christmas Carol only managed $31 million from 3,683 locations for a $8,417 average. Not bad but a bit of a shortfall, given the broad family-market potential. I suspect it was because parents decided that the mo-cap Scrooge character looked too scary for toddlers.

Sony’s This Is It was down 40% from last weekend — a relatively decent hold — for a second-place showing of $14 million from 3,481 screens. It has now $57.9 million in the domestic tll and more than $100 million from overseas bookings

As expected, Richard Kelly‘s The Box didn’t do too well. The James Marsden-Cameron Diaz horror pic took in about $7.9 million from 2,635 theaters for an average of $2998.

Vanityfair.com‘s Julian Sancton noted yesterday that a brief scene of violence in The Men Who Stare at Goats recalls the recent Fort Hood tragedy. The scene (actually a self-contained clip in a montage) shows a disturbed soldier running amok in Fort Bragg, firing at troops during their morning exercises. Sancton is wondering if Overture Films should omit the scene from future prints.

HE verdict: It happened, move on, let it ride. No one is going to blame Goats for goading the grief. All chickenshit Monday-morning-quarterback censorship calls need to be ignored. It was lame for filmmakers to talk about digitally removing the twin towers in cityscape shots used for films shot in 2000 and early ’01. I was watching the Three Days of the Condor Bluray the other day, and it has shots of the towers and the World Trade Center lobby that are truly wonderful for their time-capsule quality. Don’t erase — watch films in their proper context.

“The associations are inevitable, and they’re not only distracting but detractive to the movie,” Sancton writes. ” When Michael Jackson died, Universal cut a scene from Bruno in which Sacha Baron Cohen rifles through Latoya Jackson’s Blackberry to find Michael’s number. It was the right move to cut it, not because it would have been tasteless — that’s never stopped Cohen — but because the joke would have fallen flat.

“But then Michael died two weeks before Bruno‘s release, so there was time to swap the prints before distributing them. Logistically, it would be much more difficult to alter The Men Who Stare at Goats, now that the film is already in theaters.

The Overture marketing guys who designed (or at least approved) the Men Who Stare At Goats lobby poster were paying oblique tribute to the 1961 Judgment at Nuremberg poster. Have there been others? Probably, but they’re not coming to mind. 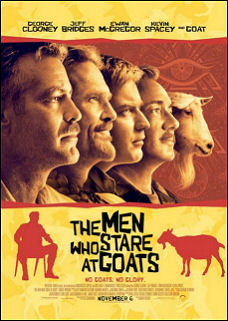 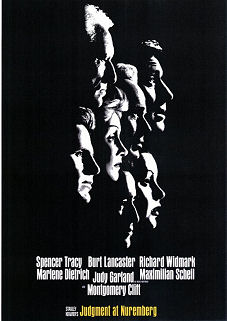 The very first version of the Nuremberg poster, by the way, used side-to-side profiles. The below image is from the soundtrack album. 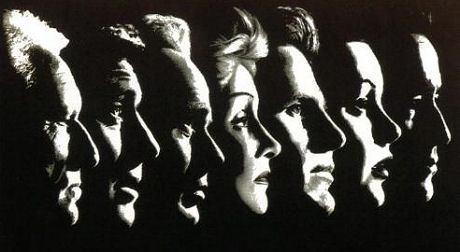 The German city is called Nurnberg, of course. Why have Americans always insisted on calling it Nuremberg? Where is the upside in changing the spelling and adding an extra syllable? How could any English speaker, educated or not, have difficulty saying “Nurnberg”?

The House’s passage of the House Healthcare Reform Bill just barely squeaked through — 220 to 215. A nice event and a victory for Barack Obama, but the bill will be watered down (and possibly even gutted) by its opponents in the Senate.

What happened last night is certainly better than nothing, but all we’re likely to get at the end of the road is a de-balled version of the Swiss health care system. A “vigorous” public option will never get approval from the Senate. The footprints of cowards, eternal disrepute, etc,