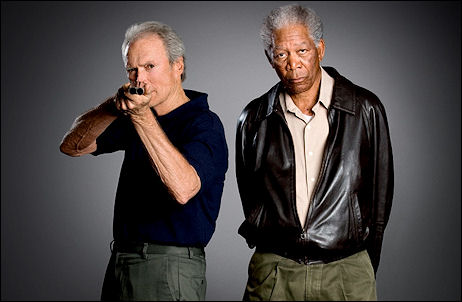 Okay, forget that 11.8 N.Y. Times/Michael Cieply estimate about Avatar costing its backers close to $500 million. (A little over $300 million to make, over $150 million to market, something like that.) The budget for Avatar, a Fox spokesperson has “bluntly” told The Wrap‘s Dominic Patten, “is $237 million, with $150 million for promotion, end of story.”

Patten writes that “presuming Fox’s $387 million compounded figure is accurate, the film should have no problem getting into the black. A $400 million score at the worldwide box office — not a stretch by any means for a film of this caliber — will provide a revenue base that, when combined with home video sales, TV and other licensing, should add up to a profit. Global home-video revenues for films of comparable budgets range from $314 million for The Dark Knight to $133 million for the critically panned Spider-Man 3.”

Here‘s a genuinely superficial N.Y. Times “T” magazine video on the Mumblecore gang. I guess it’s okay to say mumblecore now, despite what L.A. Times guy Mark Olsen wrote a while back about the term being verboten.

A Gold Derby Best Picture chart posted today showed that Up In The Air stll leads, but also that The Hurt Locker has now overtaken Precious for the #2 position. The contributors oin this chart (which doesn’t represent the whole team) are Rope of Silicon‘s Brad Brevet , Coming Soon‘s Edward Douglas, And The Winner Is columnist Scott Feinberg, WEN Network’s Kevin Lewin, The Wrap‘s Steve Pond and myself.

Gold Derby papa-bear Tom O’Neil says “there’s no love for It’s Complicated or District 9, but Julie & Julia, A Single Man and The Station Agent” — O’Neil-speak for The Last Station — “have been cited after being snubbed in the previous rundown.”

I’ve been looking around for the right Sundance Film Festival rental over the past week or so. I tried the Star Hotel, of course, but they wouldn’t even return my call. I mean, that cowboy hat/residual scent riff I ran last year almost certainly broadened awareness of that humble establishment among hundreds if not thousands of film industry people, and they can’t be polite when I call about a room?

Anyway, I’ve been calling around and checking Craig’s List and the prices I’m hearing and reading about are very pre-Great Recession. Park City condo and home owners, in short, are being their usual grubby-mitt selves and in denial of the economic climate all over this country right now. They don’t seem to understand what’s going on in the independent film business these days. It’s been cratering for several months and is but a fraction of what it was last year at this time. Last year it was a pumpkin; right now it’s a walnut. And yet everyone in Park City is charging the usual double-or-even-triple gouge rates.

Attending Sundance is tax deductible and all, but you’d think that some renters would be saying to themselves, “Well, I guess things aren’t as flush this year as they have been in years past” and adjust their rents accordingly. But nope.

“Performance art is all about context,” writes Howl star and forthcoming General Hospital costar James Franco in a new Wall Street Journal article. It’s called “A Star, a Soap and the Meaning of Art: Why An Appearance on General Hospital Qualifies as Performance Art.”

“If you bake some bread in a museum space it becomes art, but if you do it at home you’re a baker. Likewise, when I wear green makeup and fly across a rooftop in Spider-Man 3, I’m working as an actor, but were I to do the same thing on the subway platform, a host of possibilities would open up. Playing the Green Goblin in the subway would no longer be about creating the illusion that I am flying. It would be about inserting myself in a familiar space in such a way that it becomes stranger than fiction, along the lines of what I’m doing on General Hospital.”

Nine is what it is — a musical based on a stage musical based on 8 1/2, a 1963 Federico Fellini classic about a brilliant Fellini-like director who can’t decide what his next film will be about. It’s also a kind of sleek-elite Euro mood piece about 1960s Italy and sunglasses, hot women and cool coastal villages and…you know, artistic ennui and weltschmerz and all that aromatic razmatzz. It’s not about “story” as a kind of Italian glide-along atmosphere — a lather of mood and attitude and locale and Euro-coolness. 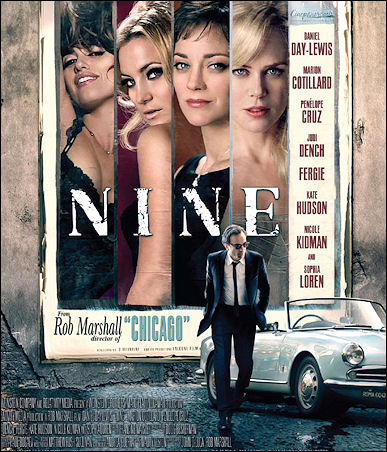 It’s not, in other words, the kind of musical that people who liked Chicago for the recognizably greedy, middle-American characters are necessarily going to relate to. It lacks…refutes, really, what is commonly regarded as the common touch. It’s about the kind of movie-making people whose every word and gesture expresses the fact that they are removed from (and are most likely disdainful of) the American experience. People who would rather take a bullet in the head than be fat or poorly dressed or visit Venice during tourist season.

So given all this history and expectation — it’s a locked-down thing without any wiggle or improv room — it really isn’t too bad. I mean, it’s Nine…whaddaya want?

It’s certainly not painful to sit through. I guess I could amp up the enthusiasm and say that I had a moderately okay time with it, although I didn’t care at all — at all — for director Rob Marshall‘s decision to shoot most of the musical numbers on the same London sound stage, over and over and over. I saw it with a lady who lives for Broadway musicals and she wasn’t over the moon about it, so there’s that too.

The actresses are all pretty good, and yes, Marion Cotillard has the strongest role as the wronged wife. (The fact that she sings two songs compared to everyone else having one tells us that Marshall sees her as the deepest and most compelling character).

And I loved watching Daniel Day Lewis slink around in this thing, his posture and composure in a constantly glum or downish angle. He’s such an intense actor and so deeply sunk into his Guido character, and without anything to do except smoke cigarette after cigarette without coughing, and wear those great looking black suits and drive that cool little light-blue sports car around. And I love the sound of his voice — it’s like an oboe or a bassoon.

Given the likelihood that the women who’ve enjoyed The Blind Side and are currently very keen to see It’s Complicated are going to feel a little bit cool towards Nine (everyone had to know this going in — it doesn’t have much of a heart and the music is only so-so) it’s actually kind of ballsy that Harvey Weinstein pushed it through and got it made. I respect that. It’s not a musical for mall people. It’s really a musical for big-city gay guys, except I know a couple who’ve seen it and aren’t huge fans so go figure.

I can’t move myself to write any more today. It was hard enough banging this out. Maybe a little more tomorrow. 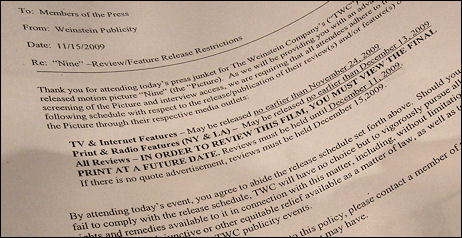 The Hollywood Reporter‘s Kirk Honeycutt has huffed and puffed and unequivocally panned Rob Marshall‘s Nine (Weinstein Co., 12.18). And Variety‘s Todd McCarthy, playing it cooler and more circumspect. has given it a friendly and approving pat on the back. 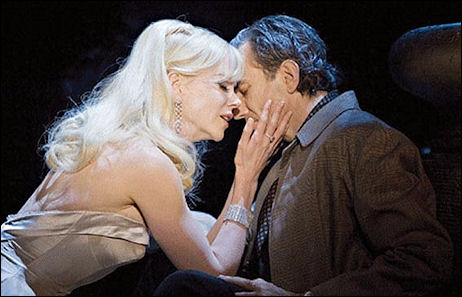 And yet between the lines you can sense an absence of serious gushing pleasure in McCarthy’s reactions. The ultimate effect is that his review doesn’t really counter-balance Honeycutt’s, which is much more impassioned. What Nine needs now is a champion — an advocate to ride in on a white horse with wings (like the TriStar horse) and write something about Nine that’s not just knowing and supportive but operatic. An orgasm review that gets high off its own juices…anyone?

“The Nine disappointments are many,” grumbles Honeycutt, “from a starry cast the film ill uses to flat musical numbers that never fully integrate into the dramatic story. The only easy prediction is that Nine is not going to revive the slumbering musical film genre. Box-office looks problematic too, but moviegoers are going to be enticed by that cast, and the Weinstein brothers certainly know how to promote a movie. So modest returns are the most optimistic possibility.

“Federico Fellini‘s 1963 masterpiece takes you inside a man’s head. Since he happens to be a movie director, those daydreams and recollections are visually striking but, more to the point, you sense, through the nightmares of an artist blocked from his own creativity, everything that is going on inside this man. In Nine, written by Michael Tolkin and the late Anthony Minghella, you get a tired filmmaker with too many women in his life and not enough movie ideas.

“Daniel Day-Lewis plays Guido and, to his credit, it’s not Marcello Mastroianni‘s Guido but a new character, more burnt-out than blocked and increasingly sickened by his womanizing. He’s an incredibly sexy man and performs all the right moves. The problem is he keeps doing those moves over and over so you experience not so much artistic angst but a guy trying to sober up from a two-week binge. Sporting a scruffy beard and running a hand through long hair only goes so far. 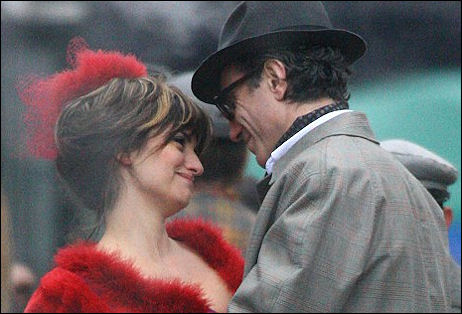 “With Nine you never get inside the protagonist’s head. You just can’t decide whether his problem is too many women or too many musical numbers breaking out for no reason.”

McCarthy finds not just reason but rhyme. “Cutting between black-and-white and color in the musical numbers and, like Fellini’s film, constantly on the move as Guido is buffeted about with scarcely a moment to breathe, much less write a script, Nine takes the the matter of directile dysfunction seriously without being pretentious about it,” he writes.

Michael Tolkin and Anthony Minghella‘s script “notably finds a way to honor 8 1/2 while enabling one to put it to the side of one’s mind, and in illuminating Guido’s folly while still taking seriously his relationships with women.

“Instead of making Guido entirely self-absorbed and self-serious, Day-Lewis at once places the viewer firmly in the palm of his hand and then in his pocket by emphasizing the character’s humorous awareness of his position in life. He puts on a grand show at a press conference, although one journalist, noting that Guido’s last two films flopped, pierces the armor of jokiness by asking, ‘Have you run out of things to say?'”

Which instantly recalls a Randy Newman lyric from a few years ago: “I got nothin’ left to say / “I’m gonna say it anyway.”