There’s no title at the beginning of Avatar, and no opening credits either. It’s just the Fox logo and fanfare and it starts, wham — an overheard moving shot of the Pandoran forest as Jake’s murmured narration kicks in, and we’re off to the races.

Films occasionally begin without a title sequence but not many. No titles is a way of saying to the audience. “You’re in for something ambitious, no fooling around…get ready.” Somehow it wouldn’t play if Paul Blart Mall Cop or Fifty First Dates didn’t have them. It has be a major-type film from a name director or the conceit doesn’t work.

The first film to play without any opening titles was Francis Coppola‘s Apocalypse Now (1979). It was mildly startling (in a cool way, of course) when Coppola introduced this 30-odd years ago. I wonder how many films have begun this way? Not more than 15 or 20, I’m presuming. Maybe a few more than that.

Avatar and all other opening-title-free films end with closing credits, of course. It would be heresy not to do this. All the contributors need their screen time for posterity.

There was at least one film to play without any titles whatsoever, opening or closing, and that was also Apocalypse Now. The 70mm roadshow version, I mean. Closing credits were added on for the 35mm general release version.

Update: A filmmaker friend just wrote to say that “many films now have no opening credits… including two of my films. It’s a very classy approach. Some filmmakers like to have credits at the start of the films because they think an audience will be trucking out of the theater at the end; others feel that the film has to earn the right for the audience to give a fuck who made it.

“I’ll bet ya that more than half of the Oscar winners over the past, say, twenty years are end-credit films.”

I wrote back in response, “When I say no opening credits I mean no title either…..I mean no nothin’ whatsover as the film begins, like Avatar and Apocalypse Now. Are you sure this is as common as you say?”

This was one of the best-tasting glasses of beer I’ve had in my life. Ice cold with a kind of cidery texture, topped with a perfect lemon wedge. One cool sip and I was saying “happy holidays!” I had it yesterday at Fanelli’s on Prince, across from the Mercer Hotel. 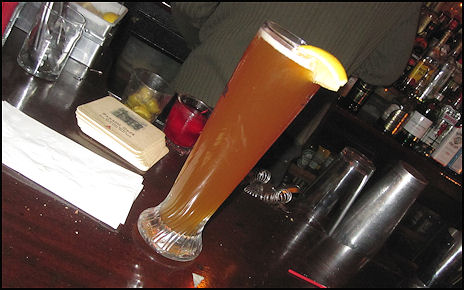 Sincere congrats to Karina Longworth for landing the film editor gig (i.e., Scott Foundas‘s recently vacated post) at the LA Weekly. She’s sharp and tough and exceptionally bright, and highly respected all around. A bit of a dweeby monk-type, perhaps, but that’s what many film critics are like. She’ll never gush over a film for grossly emotional reasons (i.e., not the kind that popcorn-munchers might recognize), and she’ll always have that slightly detached, hip-scrutiny thing going on with the thick horn-rimmed glasses and all. Longworth is a very cool brand. 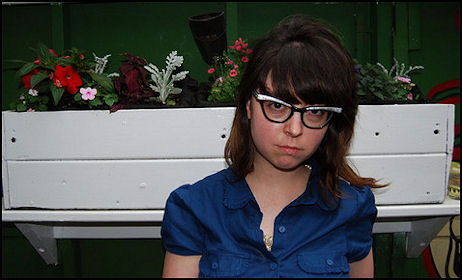 What’s with the morning-after revenue reporting at boxofficemojo.com? It’s nearly 1 pm in Manhattan and Avatar‘s Wednesday numbers still aren’t up? It made another $16 million on Tuesday, hitting $109 million total. Jett and I attended last night’s 6 pm show at the AMC Lincoln Square — we wanted to catch the monster-screen “real” IMAX 3D version — and it was packed solid. The lines inside the plex were ridiculous. So where are the Wednesday numbers? I’m guessing…what, another $15 or $16 million?

We sat in the third row, and the film looked much better than the “fake” IMAX version at the AMC 34th Street. Avatar‘s success isn’t just about the visuals and the spectacle. It’s the emotion, stupid. This is something that your emotionally side-steppy critics will never understand in a deep-down way. It’s the primal-ness, the movie-movieness of the thing. It’s all myth and metaphor and fable, and the audience (okay, the partly-Eloi audience) gets this, of course. For once they’re on the money. Nobody’s looking for Tom Stoppard/Alvin Sargent/Bo Goldman-level dialogue. They’re going with the all of it.

What delight and joy in reading the Auburn Plainsman‘s Ben Bartley, some red-white-and-blue type guy from Texas who’s fuming that such an anti-corporate, anti-arrogant, anti-Bush legacy, pro-eco, pro-nativist pantheist tract is raking it in big-time and spreading the myth everywhere, and there’s nothing this guy can do about it. Hah! Eat shit, Christian asshole!

In its own primitive popcorn way Avatar is the craftiest and most persuasive left-wing, fuck-Fox-news political film to come along in ages. Happy holidays indeed.

In a wartime letter to his parents in 1943 excerpted in the current Esquire, Lt. John F. Kennedy referred to an NCO “who always seemed to have the feeling that something was going to happen to him…and when fellows get this feeling, strangely enough, they always seem to be the ones who do get it.”

As soon as I read this I thought of film distributors possessed by this very same attitude when it comes to opening certain films. They know the flick in question is doomed, and everything in their marketing effort seems to acknowledge this. I sensed this attitude from the Sony people when they were plugging Did You Hear About The Morgans?.

They seem to be saying, “We’re just going through the motions, okay? We’re buying ads, sending the stars out on interviews, putting up wild posters, etc. But we know you’re not going to want to see this thing on opening day…okay, some of you are…but the best we can hope for is a Netflix rental six months from now. You know it, and we definitely know it. But we have to spend the money anyway.”

“When you buy a car, you ask your gearhead friends what they think — and the same should hold for movies,” says alibi.com’s Devin O’Leary. Then he makes the leap that the best movie-gearhead friends you can find these days are professional film critics. I know some folks who would dispute that.

“Film critics aren’t just opinionated gas bags (not all of us, anyway),” he continues. “A good film critic is one who knows film history, understands how films are made, has memorized the resumes of everyone involved and can play a wicked game of ‘Six Degrees of Kevin Bacon.’ A professional film critic can tell you all kinds of useful information about a film, good or bad. Film critics aren’t just there to tell you thumbs up or down, see this or don’t see that, etc. They’re there to arm you with the sort of information that allows you to make up your own mind whether you want to see a movie or not.

“And then, if you do go see that movie, hopefully you’ll do so with a deeper appreciation than you would have walking in cold. Hell, do what I do — read tons of reviews after you see a film. They might give you a different perspective on what you just saw.”

O’Leary sounds like a guy trying to talk his way out of a death sentence. He’s trying to reason with the prison guards. You don’t want to put me in the gas chamber, fellas. I’m smart, polite, considerate, well educated, well-travelled, etc.

“As of March 2, 2009, the number of fully employed film critics was down to 121,” he continues. “A hundred and twenty-one film critics? I’m part of a seriously endangered species, apparently. For crying out loud, there are more white rhinos left in the world!”

Has O’Leary been living at the bottom of a mine shaft the last few years?

Reasons for the extinction of film critics, he says, “are the movie studios’ increasing desire to control publicity, the shrinking pool of daily newspapers, the explosive growth of amateur online pundits. Don’t get me wrong — it’s not that I think my opinion is more valuable than that of the average person. It’s not that I’ve ever fooled myself into thinking anyone in Hollywood has ever taken a single word I’ve written to heart.

“Still, I think film criticism serves a valuable function. It causes people to think a little more seriously about the movies they consume. Sure, movies are there primarily for entertainment. But does that mean you can’t be an educated consumer?”

The film-loving world is a much better, richer and wiser place because of the 121. Long may they continue to get paid for doing what they do! But let’s face it — the white rhino herd has collectively wandered into a huge mud pit, and many of them are stuck in the mud (or at least are convinced of same) and can’t get out. And some are just sloshing around and getting more and more fatigued for the effort, knowing deep down that they’re doomed. It’s a grim spectacle. My heart goes out. But God helps those who help themselves.