An HE correspondent says he’s been “getting reports from theatre managers that many people are choosing to see Sherlock Holmes only after finding Avatar to be sold out.” How would Holmes be doing on its own, without the Avatar feed-through? I wonder. Avatar pays off — Holmes is a burn.

We all know about the supposed relationship between box-office earnings and being nominated for Best Picture (i.e., not enough dough = forget it), but Pete Hammond has amended this thinking in a passage from his 12.28 Envelope/Notes on a Season column.

Director-screenwriter Bill Condon (Dreamgirls, Gods and Monsters), who co-produced last year’s Academy Awards show, tells Hammond that “voters are more understanding” when it comes to low-earners like The Hurt Locker.

Kathryn Bigelow‘s film cost $11 million to make and has taken in a bit more than $12 million, but “I think the Academy is a lot more likely to forgive a movie like The Hurt Locker for its lack of big box office since they admire it and know it didn’t cost a lot to make in the first place,” Condon says.

Hammond seems to agree when he writes that “history shows the Academy of Motion Picture Arts & Sciences ‘& Money,’ as Mel Brooks once put it, is far more likely to deny Oscar glory to movies that cost a lot and turn out to be big box-office losers.”

In other words (and I hate to say this for Harvey Weinstein‘s sake), Nine?

21 Comments
Still Don’t Get It

In a 12.28 piece that attempts to explain the low-tech tabulating process that determines Oscar nominations, The Wrap‘s Steve Pond says the following about the Best Picture nomination process: “You’re listing 10 films on your ballot, but you’re only actually voting for one. Your ballot gives you a single vote, which goes to a single film. And if a movie’s not ranked number one on somebody’s ballot, it’s out.”

I think I understand this, but maybe I don’t. To a guy who’s always had trouble with numbers, this seems to mean that if Precious doesn’t end up with 501 Academy members (i.e., one tenth of the membership plus one) listing it as their top Best Picture choice, it won’t emerge as one of the ten finalists. And if this doesn’t happen, Mo’Nique‘s chances of winning the Best Supporting Actress Oscar…naah, she’ll win regardless. I know when I’m beaten.

One result of this system, says Pond, “is that the number of films contending for the 10 Best Picture nominations will actually be no larger than the number that would have been contending for five.” Wait…what?

Movie City News, he explains, “is now compiling all the critics’ top 10 lists for the year. As of this weekend, they had 54 lists, which mentioned a total of 104 different films. But only 21 of those films were ranked number one on the ballots — so if those lists were tabulated using the preferential system, those 21 films would be in the running and the other 83 would be immediately eliminated.”

I’m still having trouble with the 501 thing. It’s theoretically possible that Avatar, The Hurt Locker and Up In The Air might be listed as the #1 Best Picture choice on, let’s say, 4500 Academy ballots. That would mean that remaining choices on these 4500 ballots won’t mean squat, right? That would leave 1000 more ballots from which seven other Best Picture nominees would need to be chosen. This means that these seven would have to appear as #1 Best Picture choices on only 142 ballots…right?

No, it’s not right. A little voice is telling me this, and to hell with it. I don’t want to understand the math. I’ve never wanted to. I used to fail math quizzes when I was a teenager.

Freudian analyses had a certain currency in the ’60s and ’70s, and, as Beatty puts it, “I wanted to challenge the fashionable assumption that the proverbial Don Juan figure is expressing self-hatred, self-love, hatred of women, homosexuality, sadism, masochism, a wish for eternal life and so on.”

“Beatty never thought about himself as someone who was inordinately interested in sex, obsessed or addicted to it in any way,” Biskind explains. “His attitude was, it’s perfectly normal, and society was too puritanical to accept it. And indeed, if you looked like him and were gifted with the talent for seduction that was his, why not? He did it because he could, thank you very much, Dr. Freud!”

The holiday doldrums — 12.25 through 1.2.10 — are upon us now. This may seem like a good thing from an impulsive-adventure perspective (read two books, drive to Vermont, fly to London, walk into the city), but I was outside this morning and it’s 22 degrees (and feels like 4, according to weather.com). So I suppose I’ll go with the reading. If only Criterion’s Che Bluray was obtainable…

Marshall Fine‘s Best of the Decade list reminded me of two I should included in my own — Pedro Almodovar‘s Volver and Errol Morris‘ The Fog of War. Wait a minute…Kill Bill? And The Hours?

I made a mistake running my Best of the Decade piece back in early October. It got 109 comments, but I still don’t think many people were thinking sum-ups at the time. Since then every critic and blogger on the planet has posted a best-of-decader, of course. So I may as well post mine again only with four extra titles [UPDATED] — James Cameron‘s Avatar, Michael Mann‘s Collateral, Pedro Almodovar‘s Volver and Joel and Ethan Coen‘s A Serious Man — for a total of 42. The top ten are obviously indicated so if that’s what you’re looking for…

Besides being a great headline in the tradition of ‘Headless Body in Topless bar,’ it also turns down the terror factor by making the underwear bomber a figure of foolery. 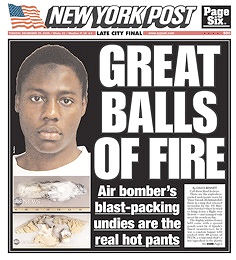