22 Comments
Buried Is A Burn

SPOILERS CONTAINED HEREIN: This morning I saw Rodrigo Cortes‘ Buried, the Ryan Reynolds trapped-in-a-large-coffin movie which has been shown at Sundance and was recently acquired by Lionsgate. I’m basically giving it an A for execution and a C-minus for story because I’m a nice guy. It really deserves an F because it jerks you around on a nail-bitten popcorn level (escape from a tight spot) with no intention of paying off on that level. Great filmmaking, shitty payoff = overall C grade, at best. 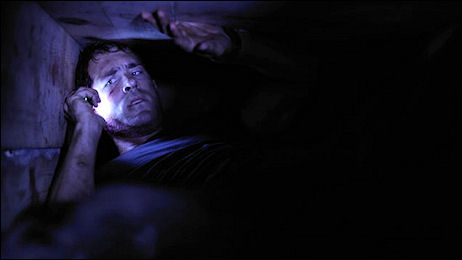 All the critics having babies over this film are praising Cortes’ Hitchcock-like ingenuity in making an engrossing feature that takes place entirely in a small enclosed space. And they’re correct about this. Cortes is as inventive a filmmaker as Hitchcock was in making Lifeboat, if not more so. But these praising critics are deliberately ignoring how unsatisfying Buried is in terms of denying Joe Popcorn’s natural wishes while watching such a tale.

Knowing the basic premise, you may assume going in that Buried will be a harrowing mental ingenuity/physical feat/engineering movie about a guy managing to free himself from a large coffin-sized crate that’s been buried two or three feet underground. (There’s enough room in the crate for Reynolds to wriggle around and lean on his side and shift around, etc.) But what it is, really, is a darkly humorous socio-cultural message flick about selfishness and distraction — i.e., how everyone is too caught up in their own agenda to give a shit about a person who really needs help.

Reynolds’ character — a truck-driver contractor working in Iraq — manages to speak to several people on a cell phone that he’s found inside the crate. The prolonged joke is that each and every person he turns to for help (with the exception of his wife) tells him that they need him to address or answer their needs first before they”ll give him any assistance.

Boiled down, the movie is kind of a metaphor for dealing with tech support or any corporate or bureaucratic employee who specializes in driving complaining customers crazy. Everyone Reynolds speaks to patronizes him, tells him to calm down and speak slowly, asks stupid questions and in one way or another blows him off or fails to really engage and provide serious assistance.

Buried is going to be a bust with audiences once they see what it is. I felt aroused and stimulated here and there in a film-dweeb sense, but I felt pissed off and fucked with at the finish. Cortes has excellent chops and a great sense of style (the opening credits sequence is the best thing about Buried) and Reynolds may have delivered the most impressive performance of his career, but…well, I’ve said it.

Jett Wells, my 21 year-old son who’s much more attuned and perceptive about digital technology than myself, is calling Apple’s iPad — officially unveiled just a few hours ago — a “slightly depressing” disappointment. He’s listed five reasons why. I’ve posted them after the YouTube clip.

“Of course this could just mean publishing companies haven’t developed to the new platform yet, but it’s still troubling. Jobs didn’t mention magazines once during his shpiel even though publishing geeks and journalists alike had been calling the Tablet the savior of journalism. And there’s still no progress between Adobe Flash and Apple, preventing high quality multi-touch animation— paramount to the advancement of digital magazines. (PC World’s Nick Mediati has discussed this aspect in greater depth.)

“The Droid and Google Nexus smart phones have set the bar for multi-tasking features, allowing the user to access multiple apps at the same time, including music. The iPhone 3GS cannot do this, which means Apple needs to catch up, and the iPad was a perfect opportunity to do this…and yet, FLOP! The iPad uses a fairly similar OS as the iTouch. Without multi-tasking features, the iPad doesn’t have an identity in between laptops and smart phones.”

“There were rumors the iPad was going to have a built-in webcam so you could Skype chat in high definition while out in a park somewhere. That’s bullshit too. Just having the webcam could’ve helped the iPad separate more from the iTouch.”

Only a few hours since the announcement and the Apple iPad already has a humiliating pun throughout social networks. It’s now coined the iTampon. In fact, #iTampon is the top Twitter trend right now. This MAD TV video explains it.”

“Forget about taking your iPad to the beach because you still can’t see the screen with the glare. How big of a fundamental detail can you screw up, Apple? One of the biggest focuses of the iPad was it’s portability, and it can’t even light up with in sunlight.”

Conclusion: The iPad will develop over time and improve like the iPod and iPhone, etc. I’ll start changing my mind about this thing after you can start using serious software programs on it like FinalCut or InDesign. You can import audio and video directly into it, which is cool. But it’s still hard not to say that today’s presentation was a fairly major letdown.

I’m typing this from a table at a press-filmmaker’s luncheon on Park City’s Main Street so there’s no concentrating, but Amir Bar-Lev‘s The Tillman Story is among the four or five best films I’ve seen at Sundance 2010, and certainly the finest documentary. Here’s some ragged video I shot during last night’s post-screening q & a in which Bar-Lev and Mary Tillman (mother of the late soldier and pro football player) fielding questions.

I’m in full agreement with Dennis Harvey‘s paywall-blocked 1.27 Variety review, so here it is in full:

“Amir Bar-Lev’s The Tillman Story is a riveting account of how a soldier’s death in Afghanistan was spun into a web of public lies. When pro football star turned post-9/11 Army enlistee Pat Tillman was killed in the course of duty, the embarrassing actual circumstances were covered up and turned into a flag-waving story of heroism that the Bush administration happily — and knowingly — used for propaganda purposes.

“The Tillman family’s refusal to accept the official story led to disgraceful admissions — yet, so far, no repercussions for those who perpetrated the lie. Theatrical, broadcast and further fest exposure are assured.

“Told much more via straight reportage than Bar-Lev’s fascinating My Kid Could Paint That, The Tillman Story mixes talking heads and archival footage into a detective story of escalatingly scandalous proportions. No matter one’s political bent, the blatant misconduct by grunts, senior officers and politicos alike is terribly disturbing.

“Small (at 5’10”) by football standards, but an all-star defensive back, Tillman walked away from his multimillion-dollar contract with the Arizona Cardinals in May 2002, clearly feeling some moral duty yet refusing to discuss his motivations publicly. Younger brother Kevin also joined the Army Rangers, winding up in the same platoon.

“Even beyond his sports celebrity, Tillman was an unusual enlistee — a fan of Noam Chomsky, he’d excelled academically as well as athletically, hailing from a Northern California family that instilled old-school liberal values. He was outspoken yet modest — a natural leader who never bullied and enjoyed encouraging underdogs. (The only person who casts doubt on his character here is, suspiciously, the sole platoon member who still sticks by the Army’s latest official story.) 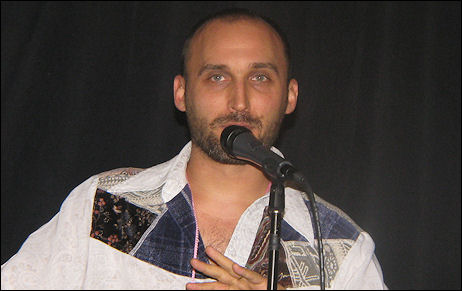 “Tillman also opposed the war in Iraq, and was further disillusioned by what he saw in his first tour of duty there. Nonetheless, he refused a secret deal between the government and NFL that would have allowed an early return to football, feeling it his duty to serve the full three years signed up for. His second tour was in Afghanistan, and during a reconnaissance sweep along the Pakistan border, he was shot to death.

“The Army’s story — initially believed by the Tillman family and leapt on by the media — was that he’d heroically put himself in the line of Taliban fire to save other soldiers during an ambush.

“But even as the tale was exploited to drum up support for the war, questionable details troubled the Tillmans. His mother’s dogged pursuit of answers only raised more questions; finally, the Army admitted that Tillman might have died via accidental ‘fratricide,’ or friendly fire. It’s possible there were no enemy insurgents present at all.

“It was only when father Pat Sr. wrote a letter accusing the military of fraud that a second internal investigation was launched. As the pic notes, however, high-level officials simply found a mid-level scapegoat, then seemingly lied their way through a Congressional hearing, and excused themselves from further culpability.

“While precise circumstances may never be known. Tillman’s death appears to be the result of gross negligence at best, and perhaps far worse than that, with the most damning account relating that a fellow solder — or soldiers — shot at Tillman for up to a full minute, from a plain-sight distance of 40 yards.

“It’s an appalling story, yet at the same time somehow affirming: The unconventional Tillmans are an admirable bunch, and in choosing the wrong family to lie to, authorities wound up exposed, albeit largely unpunished.

“While no senior officers — except the one scapegoated — speak in the archival clips, most of Tillman’s fellow soldiers give damning testimony of the official story. Retired special-ops Stan Goff provides insight into how the U.S. military can use bureaucracy, language and evasion to bury uncomfortable truths.

“Assembly is first-rate. Pic was retitled just before Sundance from its awkward original, I’m Pat Fucking Tillman. That phrase constituted the subject’s last words as he yelled to identify himself to those shooting at him.”

Marshall Fine has written a fairly sage Sundance sum-up piece, although the only film he seems to have fully embraced is the fascinating but faintly icky Catfish. What about The Tillman Story (which I saw and responded very well to last night), Buried, Get Low, Animal Kingdom (top-tier Australian crime pic in the vein of At Close Range), The Mormon Proposition, Winter’s Bone and Boy?

“Ultimately, audiences want what they want,” he writes, “and the mass audience wants mass entertainment. Whereas Catfish, one of the most surprising and moving films I’ve seen this year, will never appeal to a mass audience — even if you give away free tickets that included a raffle chance at dinner with Brangelina.” (New iconic power-glam couple needed — these two are apparently toast.)

“It’s not that the mass audience is made up of cretins — it’s that the vast majority of people don’t go to the movies (or to the theater or turn on their TV) to be challenged,” Fine explains. “Life is challenging enough on a daily basis; entertainment, they believe, should be entertaining. That’s not a judgment, just a fact.”

Here’s another fact: moviegoing cretinism is precisely defined by those who primarily view films as get-away vacations or hideaway shut-downs. People of depth and intelligence view films as opportunities to feel, commune, turn on, see inside and dig into the richness of things. To them, theatres are churches. But to the lowbrows the ideal movie experience is equivalent to popping a nice Lemon quaalude or getting a soothing, emotionally reassuring massage.

I love going into comfort zones also — who doesn’t? — but to be only interested in movies that are the equivalent of a luxury Carnival Cruise is basically an admission of spiritual failure and cowardice.

To the church-going crowd, movies like Catfish, The Tillman Story, Get Low, Animal Kingdom, Four Lions and Boy are entertaining. Because they’re clever, oddly hilarious, surprising, gripping, head-turning, quietly emotional and always up to something fascinating, sometimes in a slightly off-kilter sense and sometimes not. Imagine that!