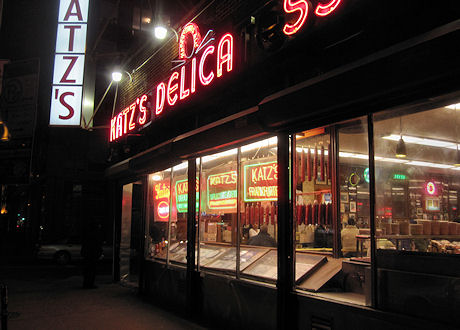 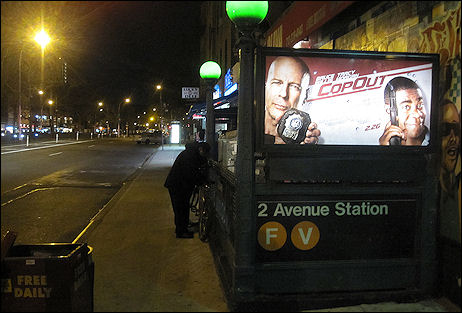 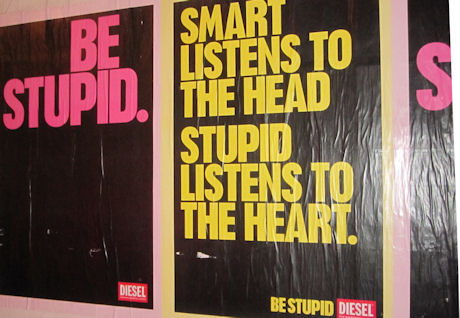 With reader assistance I’ve located a slow-loading online trailer for Julio Medem‘s Room in Rome, which CHUD’s Devin Faraci wrote about on 1.19. The quality of Medem’s Sex and Lucia indicates that Room in Rome will have a mitigating touch of class. IFC will open it domestically later this year.

Almost anytime an American film shoots in Rome, they get it wrong by doing everything they can to gloss and tidy it up. Medem apparently shot most of Room in Rome in Madrid except for a few exteriors. Thinking about Rome put me in a mood to run one of my own pics, shot in June of ’07. 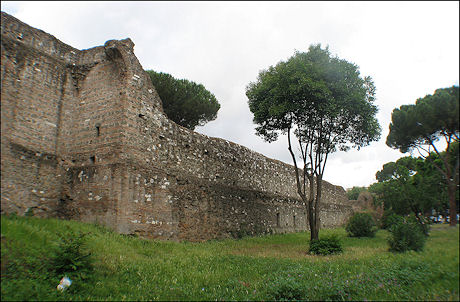 The “wall of Romulus” is one of three ancient walls surrounding Rome. This may be it, or it could be one of the Servian walls builit in the ninth century.
January 31, 2010 9:09 amby Jeffrey Wells
16 Comments
Sex and Trauma

A 1.28 Hollywood Reporter story about an HBO project called Emergency Sex caught my eye because it reminded me of (a) the 9.11 “terror fucking” syndrome that was observed in Manhattan, and (b) the heated romantic triangle in Iraq involving CBS News correspondent Lara Logan that was reported about during the summer of 2008.

Emergency Sex will star Maria Bello, is being written by Slumdog Millionaire writer Simon Beaufoy, and will be executive produced by Bello, Beaufoy and Russell Crowe.

Inspired by the book “Emergency Sex and Other Desperate Measures: A True Story From Hell on Earth,” by Kenneth Cain, Heidi Postlewait and Andrew Thomson, the project “revolves around the larger-than-life exploits of expatriate nongovernment-organization workers who find their sanity tested in the face of atrocities, loneliness and primal desires,” the story says.

The book chronicles the real-life experiences of Cain, Postlewait and Thomson, who met in Cambodia during the 1990s as members of a UN peacekeeping mission.

Eighteen months ago I wrote that Logan’s story “would make for a good filmed drama. The considerate way to go about it would be to use the facts (romantic Baghdad triangle, emotions at a fever pitch, divorce proceeding, bullets whizzing past lovers’ heads, IEDs exploding) but with made-up names and perhaps a slightly fictionalized story line just to blur things up.

In early July ’08 Washington Post columnist Howard Kurtz wrote that “while some may accuse [Logan] of tawdry conduct, what happened to her is an all-too-familiar tale of someone consumed by a career and needing a partner who understands the peculiar pressures involved.”

Scott Feinberg‘s final Oscar nomination forecast include the following the Best Picture picks: The Hurt Locker, Avatar, Up in the Air, Inglourious Basterds, Precious, An Education, Up, Invictus, District 9, The Blind Side. He omits A Serious Man because, being a real-world handicapper, he obviously believes that most Academy voters will omit it also.

No rag on Scott but that’s just (a) sick, (b) derelict and (c) decrepit. To nominate Invictus, a decent but second-tier Clint Eastwood film primarily because it honors Nelson Mandela by way of a steady and soothing Morgan Freeman performance, and at the same time not nominate one of the finest-ever Coen brothers’ films — a pitch-black comedy with a riveting exactitude of tone, cultural satire and misanthropic worldview — is outrageous. Putrid. Shame on anyone who would think and nominate along these lines.

March 23rd will be a banner day for Blu-ray aficionados with Paramount Home Video’s long-awaited African Queen restoral/remastering and Criterion’s Days of Heaven, already devastating on standard DVD, making their debuts in this format. And then a week later (3.30) comes the Collateral Blu-ray. 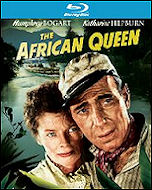 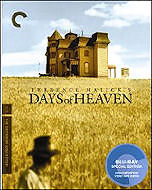 Three years after its debut at the 2007 Cinequest Film Festival, Michael Moriarty and Brian Keown‘s Hitler Meets Christ will be available on DVD on 3.23.

Pic is “a discussion between two mentally ill vagabonds who only believe themselves to be Der Fuhrer and the Savior, set against Vancouver’s wine country on East Hastings Street,” said one summary.

In his capsule review, Metroactive’s Richard Von Busack wrote the following: “Like Nixon, Hitler is a part that is good for any actor, and Moriarty does it proud, even with just the hint of the famous mustache visible above the grizzled beard. His Hitler is scatological and taunting.

“But he doesn’t seriously miss his lost empire. What he seeks, instead, is death and oblivion — a nothingness he can only achieve by repenting, as if surrendering to God’s son. Dismissing this ultimate act of egocide, Hitler tells Jesus, ‘You’re crazier than Rudolph Hess.’ The intriguing idea never transcends the level of a squabble.”

Why would a lanky Abe Lincoln-sized guy want a Tinkerbell-sized girlfriend, regardless of how hot she might seem? Why would any confident, self-respecting guy want to have sex with a woman small enough to be eight or nine years old? I can understand Hobbit-like women wanting a Richard Kiel-sized boyfriend for protection or whatever, but such couplings do seem a bit perverse from the guy’s perspective. 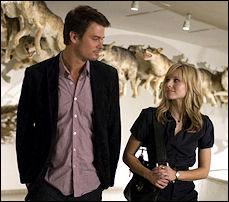 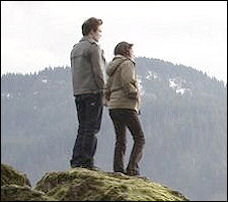 I’m not saying that men in such relationships are necessarily having wicked fantasies, but it’s only natural to hook up with someone who’s in the same approximate realm (physically, emotionally, attractiveness-wise) so why do Gort-sized guys hook up with little bitty pixies with Tiny Kingdom feet and hands and little peep-peep voices?

I was just considering the odd disparity between When in Rome‘s Kristen Bell, who could easily pass for a fifth grader if she weren’t biologically mature in other ways, and Josh Duhamel, who’s so much taller than Bell he seems almost Navi-sized.

Or the romance between Twilight‘s Rob Pattinson, who’s a good 6’2″ or 6’3″, and the elfin Kristen Stewart. It hit me as I looked at her on the Eccles stage in Park City that she’s not just short but tiny in a growth-stunted way. She physically got to age nine or so and then just stopped. 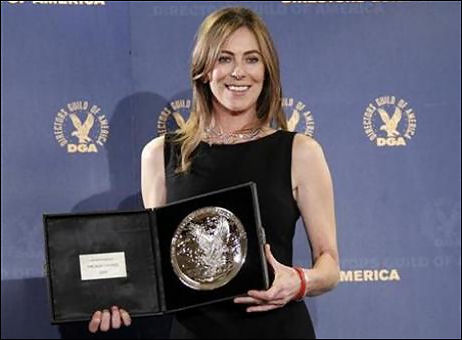 I wrote from Sundance on 1.26 that “if you remove the first 20 or so minutes, Jay and Mark Duplass‘s Cyrus could be called a mature, somewhat comedic and satisfying handling of an unusual romantic triangle situation. It’s ‘funny’ here and there but mostly it’s just believable, buyable and emotionally even-steven. A truly welcome surprise.

“In the hands of Adam McKay or Shawn Levy or any of the other big-studio whores who are always directing expensive Eloi comedies, Cyrus would have been a Joe Popcorn torture-chamber movie like Stepbrothers, in which Reilly costarred with Will Ferrell.

“It’s something else with the Duplass brothers running the show. It’s quietly absorbing and occasionally hilarious, and made all the better by superb acting.

“But those first 20 or so minutes are very weird. For during this period Cyrus plays like it was directed by McKay or Levy. Reilly behaves so over-the-top needy and neurotic and boorish and lacking in social skills that I was ready to leave. “I really don’t want to hang with this asshole,” I was saying to myself. I was just about to bolt when all of a sudden Reilly hooked up with Tomei, went home with her, fell in love and turned into a different person.

“It plays as if the Duplass brothers suddenly changed their minds about Reilly’s character and decided to go with a much calmer and more emotionally secure vibe.

“It’s almost as if they sat down and said ‘we need to get the animals to see this so let’s make an animal comedy straight out of the Will Ferrell loser file so the Fox Searchlight trailer guys can sell this portion, and then turn around and make Cyrus into a whole ‘nother bird — a movie aimed at a smarter crowd — about 20 or so minutes into the running time.”