110 Comments
Did It To Himself

“Ford isn’t just an actor but a movie star, too — not just a celebrity but a commodity. He’s extremely aware of how long he chased success in Hollywood, acutely conscious of the business of the show business he’s in. And he’s at peace with that. [During our interview to promote Kathryn Bigelow‘s K9], “the words ‘money’, ‘business’, ‘job’ and ‘earning a living’ tunred up often in his answers. The words ‘art’, ‘craft’, ‘calling’ or ‘profession’ weren’t mentioned once.

“Take, for example, the question of low-budget, independent films. Most big-name actors say they’d love to do one, if the right part came along. A few — Jennifer Aniston, Matt Damon, Samuel L. Jackson — have actually gone ahead and taken the chance. So if some bright young kid with a digicam came up to Ford with a semi-improvised script and an idea for a fast and dirty 14-day-shoot…

“The hypothetical wasn’t even finished before Ford’s mouth twisted a little in impatience.

“‘You’ve created a scenario that’s very easy for me to say no to,’ he said. ‘This is a business for me. I have things to do with my time when I’m not earning a living, and I do pretty much tend to practice this as a job. If I’m going to take on a challenge I want it to be something where I can devote a certain period of time, make my nut and then go home.'”

Everyone wants health care reform but the Democrats “couldn’t sell it,” Bill Maher said to Jay Leno last Friday night. They’re so impotent in their unwillingness to wield power that “they couldn’t sell a cub scout to a pedophile,” he said.

15 Comments
They Done Him Wrong 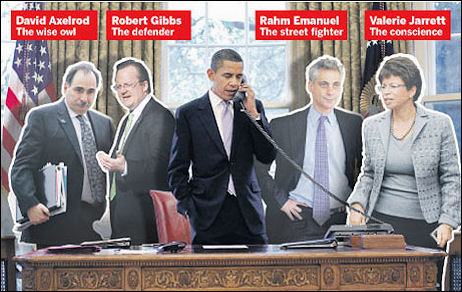 A HuffPost summary states that “if current trends continue, this once mesmerizing Camelot-ish operation will be be seen in the history books as the presidential administration that — to distort slightly and inversely paraphrase Churchill — never have so many talented people managed to achieve so little with so much.”

“Just over a year into his tenure, America’s 44th president governs a bitterly divided nation, a world increasingly hard to manage and an America that seems more disillusioned than ever with Washington’s ways. What went wrong?

“Those around [Obama] have a…specific diagnosis, and one that is striking in its uniformity. The Obama White House is geared for campaigning rather than governing, they say.

“Barring Richard Nixon‘s White House, few can think of an administration that has been so dominated by such a small inner circle.

“‘It is a very tightly knit group,’ says a prominent Obama backer who has visited the White House more than 40 times in the past year. ‘This is a kind of ‘we few’ group…that achieved the improbable in the most unlikely election victory anyone can remember and, unsurprisingly, their bond is very deep.’

“John Podesta, a former chief of staff to Bill Clinton and founder of the Center for American Progress, the most influential think-tank in Mr Obama’s Washington, says that while he believes Mr. Obama does hear a range of views, including dissenting advice, problems can arise from the narrow composition of the group itself.”

Marshall Fine is wondering why three fabulously wealthy big-name actors who are past their prime and on their way down — Tom Hanks, Harrison Ford, Mel Gibson — don’t just retire from the mass-market movie game and henceforth act only in pure indie or even straight-to-video flicks for young directors who could use their help.

In a pig’s eye. You’d think that a marquee-name actor with several hundred million in his or her bank account would want to make movies for quality-chops alone and hang the box-office. But for some perverse reason the richer actors get the less inclined they are to make smallish films. (Bruce Willis is an exception.) The only actors who act in bare-bone indie flicks are those who have no other choice.

Do you think Steven Spielberg will ever make an Amblin’ or an E.T. again — a small straight-from-the-heart movie? He is known primarily these days for being (a) a ridiculously wealthy wheeler-dealer producer, (b) a director of insubstantial escapist mulch, and (c) being too chickenshit to direct the Abraham Lincoln/Liam Neeson/Tony Kushner movie.

Where is that smallish indie film that George Lucas said he wanted to direct? It’ll never happen.

Yeshua of Nazareth said something about it being easier for a camel to pass through the eye of a needle than for a rich man to enter the kingdom of heaven. What he meant was that rich folk are incapable of giving themselves to something for its own spiritual value. They’re always looking at life in terms of their portfolio.

James Cameron is an exception to this rule. The reason is that he was born — blessed — with a reckless madman gene.

Fine puts it thusly: “Why don’t these stars of the 1980s and 1990s announce that, henceforth, they are retiring from the blockbuster game? They’ll only do small independent films that interest them and will willingly be paid scale and a small piece of the back end, rather than their seven or eight-figure quote. They will make themselves available to first-time and rising directors who have a vision but lack the funds to make their low-budget films.

“While I’m getting all pie-in-the-sky here, why not take it a step farther? These will all be films made specifically for video-on-demand, but will play the festival circuit to generate buzz and will be offered to critics for review. These stars will then do publicity for the films – say, via a satellite press day – with whoever is interested. They’ll also hit the late-night talk show circuit to promote the films, thus lending legitimacy and creating a want-to-see factor for video-on-demand.

“As a result, the term ‘straight to video’ will lose its onus and become synonymous with quality, inexpensive films. The ripple effect will include an increase in the homes equipped to receive/purchase these films, which are significantly cheaper than the cost of visiting a multiplex or even an arthouse.

“This ignores, of course, the usual trend: that the unknown and rising directors will have a hit with their personal vision – and then gladly sell their souls to collect a major payday to make a comic-book movie. (The (500) Days of Summer guy.)

“More often, it’s only stars who have reached a certain level of desperation, who will grasp at a role in a small, low-paying independent film as a possible way out of the doldrums – a way to get some indie cred, but only to relaunch as a studio commodity. And the idea is that, with luck, the film will get noticed and vault them back to the big-time.”

Notes on a Season columnist Pete Hammond recently reported Avatar director-writer James Cameron believes that were it not for the Alice in Wonderland, Hubble 3D and How To Train Your Dragon eating up all the 3-D screens in March that Avatar might reach the $3 billion worldwide mark.

I asked Cameron about this myself two nights ago and he confirmed. I don’t know about the $3 billion but he’s almost certainly right that if Avatar could remain in all the 3-D venues it would continue to earn big-time into March and April.

“Back in 1979, Marty Feldman was concerned about the increasing piety of the right wing, the blind susceptibility of their followers, the insatiable reach of American corporations and people like Anita Bryant invoking God’s name in regards to subjugating others,” a friend writes. “I know exactly what he’d make of Sarah Palin today.

Feldman’s In God We Trust, which he directed and co-wrote, bombed with the critics and didn’t sell many tickets. It was also torpedoed, sand-bagged and dis-owned by its own distributor, Universal Pictures.

It’s a religious satire about an innocent monk (Feldman) who leaves his monastery and is corrupted by a televangelist — Andy Kaufman‘s Armaggedon T. Thunderbird — who spoke directly to God. Commonly known as ATT, he lives in a residence that resembles the Oval Office, and makes his ultimate intentions known during a Christmas Eve broadcast.

The above YouTube clip is that Xmas Eve sequence which, I’m told, very few have seen unaltered.

“Marty, thanks to the success of his previous film, had secured the rights to final cut from Universal. But Uni honcho Lew Wasserman hit the roof when he saw these scenes, especially how parent company’s name MCA was used, and demanded it excised. Marty refused, despite Ned Tanen’s warnings there would be serious repercussions.

In God We Trust “was dumped without fanfare in October of 1980. Marty’s rich overall deal was cancelled three days later and he was booted off the Universal lot. He was labeled a pariah around town as a writer and director for the impertinence of biting the corporate hands that fed him. It was pretty much career suicide for him behind the camera.

“The companies and organizations referenced were livid at their inclusion. Universal used music rights as an excuse to alter the film for its few late night TV airings.

“Here is Marty’s prophetic vision of fundamentalist groups, the religious right, teabaggers and the analogous behavior they inspire. You’ll note the followers sharing the stage with Andy’s character are all suspiciously blonde and blue-eyed.”

My strongest impressions regarding last night’s Chopin Virtuosos tribute featuring An Education‘s Carey Mulligan, A Serious Man‘s Michael Stuhlbarg, The Lovely Bones‘ Saoirse Ronan, and Young Victoria‘s Emily Blunt, in this order: (a) the fact that Mulligan got the biggest laugh (see video below), (b) moderator Sean Smith‘s observation that Mulligan has “probably heard from scores of middle-aged men telling her that they loved An Education,” (c) Ronan’s Irish accent is endearing, and (d) a notion that Stuhlbarg is a man with great lakes of inner peace. 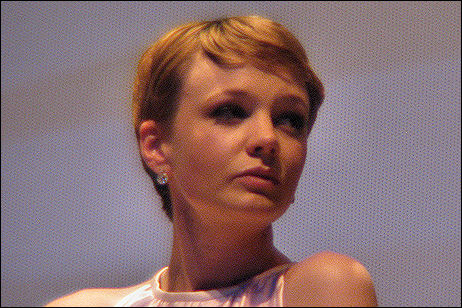 A scheduling conflict prevented nominated Precious star Gabby Sidibe from attending. Perhaps her friendship with Mo’Nique has begun to make an impression?

I may as well admit that I’m starting to vaguely zone out with the Santa Barbara Film Festival tribute ceremonies. I’m still good to go (Kathryn Bigelow has her big moment tonight) but I’m feeling the teeny-weeny beginnings of a mental Xanax sensation. This has nothing at all to do with the admirable chops and historical fabulousness of the artists being honored. It’s just that something inside begins to wither after the third or fourth one.

I’m sorry. I’m trying to suppress this. It’s just that I’ve now attended three in a row and there’s another one tonight and…fuck it, I’ll be fine. I know that if I went hiking in the mountains and made a fire at dusk and slept in a tent I’d be raring to go for another three or four tributes in a row when I returned. Maybe if I went for longer bike rides on the beach? 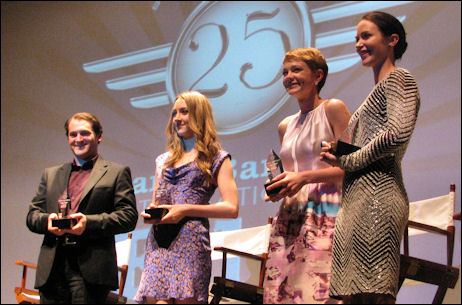 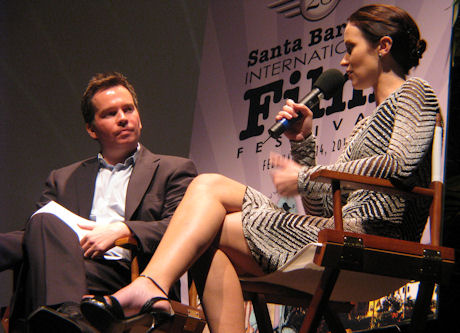