Support on Patreon Follow @wellshwood
103 Comments
Frown and Bear It 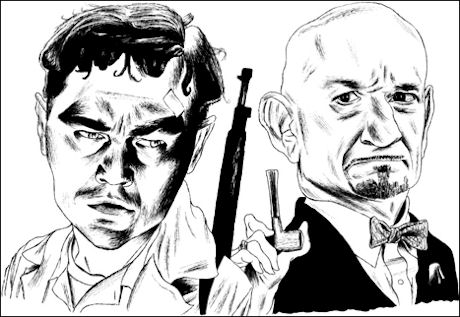 “The nominal task confronting [Scorsese] and his screenwriter, Laeta Kalogridis, is to take Dennis Lehane‘s novel of the same name and render it fit for the screen. But he has a deeper duty — to pillage all the B movies he has ever seen (including some that were forgotten by their own directors), and to enshrine the fixations and flourishes of style on which they relied.

“In a celebrated riff on Casablanca, Umberto Eco wrote, ‘Two clich√©s make us laugh but a hundred cliches move us, because we sense dimly that the cliches are talking among themselves, celebrating a reunion.’ Shutter Island is that reunion, and that shrine

“The final twist is a fizzle; not because we see it coming (though we do) but because Scorsese, with a great weight of exposition dumped in his lap, struggles to keep it snappy. He even has a character stand beside a whiteboard and point out written clues. It’s like having I Walked with a Zombie interrupted by Sesame Street.

“When it comes to ripe old frighteners — or to any other overheated genre — Scorsese is the most ardent of proselytizers, so much so that I would prefer to hear him enthuse about Hammer Horror films, say, than to watch a Hammer Horror film. Shutter Island, with its remote lighthouse and its spiral staircase, is a fleshing out of these scholarly crushes.

“That is why we get the patient with the Frankenstein stitches across his facial scar, and the iron-hearted prison warden (Ted Levine) who, during his only conversation with Teddy, informs him that ‘God loves violence.’ These are not quite jokes, but nor are they saddled with dramatic meaning; they are light, rhetorical gestures toward the dark.

“No one is denying the energy and the dread that stalked the best B movies of the past, but, when the best director of the present revives such monsters, how can he hope to do better than a B-plus?”

This Chicago Sun Times article would not only have us believe that columnist Laura Washington had never heard of Kevin Smith when she wrote it, but that her editors didn’t advise to skip the part about being ignorant of Smith’s fame. Where’s the upside in confessing to this level of cluelessness? All it does is distract from her message about the pitfalls of obesity and make other journalists ask, “What’s her problem?”

The German-born Douglas Sirk has long been considered a world-class, pantheon-level filmmaker. That’s because the film dweebs have been telling us for years that the dreadfully banal soap-opera acting, grandiose emotionalism and conservative suburban milieus in his films are all of an operatic pitch-perfect piece and are meant as ironic social criticism. (Or something like that.)

The dweebs are playing an old snob game. They’re basically saying that you have to be a serious cineaste to recognize Sirk’s genius, and that if you don’t recognize it then you need to think things through because you’re just not as perceptive as you need to be.

I can watch this clip over and over. Puts me in the greatest mood. That’s all.

I’m told that certain British exhibitors and theatre managers who’ve seen Tim Burton‘s Alice In Wonderland feel it’s “a true stinker of a movie…an unmitigated disaster,” as one correspondent puts it. “It’s no shock that Disney want to release this on DVD as soon as possible. Not sure what can save this though the promotion so far might guarantee it a great opening before poisonous word of mouth kills it.”

To which I replied, “Wait…a stinker? Burton might be off his game, but I can’t believe it’s a disaster…c’mon. Burton is no chump, he knows what he’s doing.”

To which the exhibitor replied, “Saw a screening last week, Jeff. Will let you wait to judge it but the movie is a mess. No real plot to speak of and some terrible acting from the likes of Crispin Clover. Even some of the CGI is messy. Cinemas not wanting to show this due to early DVD terms from Disney might not [realize] how lucky they are long-term. There was also a screening last week for critics and that didn’t go well either.”

A Manhattan-based critic friend adds the following: “Alice sucks. Visually amazing [with] many familiar characters but none of the story from the books. No wit, no tension — an action-fantasy, if you can believe that, minus comedy.”

Vulture reported two days ago that AMC, America’s second-largest theater chain, “is threatening to boycott Alice in Wonderland because of Disney’s plan to shorten the film’s theatrical run. Disney wants to keep Alice in theaters for twelve weeks rather than seventeen in order to capitalize on the DVD appeal of this family-friendly movie about pigs that serve as footrests.

“An AMC boycott would seriously harm the box-office returns for Alice, which would lose revenue from the company’s more than 4,500 screens worldwide. And because of that, AMC and Disney are expected to work something out before the movie’s March 5 release.”

London Update: “I see there are already doubters accusing me of lying,” the exhibitor says. “Just wait until you see the movie, Jeff. I was hoping that this would be great as Burton is perfectly capable but alas, this is an expensive disaster. Critics who have seen it are under embargo at the moment. Reviews are going to be interesting.”

Further Update: BBC News is reporting that Alice in Wonderland “will not be screened at Odeon cinemas in the UK, Irish Republic and Italy, the cinema chain says. The move is in response to the Disney studio’s plan to reduce the period in which it can be shown only in cinemas from the standard 17 weeks. The plan would allow Disney to release the film on DVD at the end of May.

“Odeon said this would ‘set a new benchmark, leading to a 12-week window becoming rapidly standard.'”

In an apparent exclusive, Cop Out star Bruce Willis has told MTV News’ Josh Horowitz that (a) “I think we’re gonna do” a Die Hard 5 movie for 2011, and that (b) he’d hire Len Wiseman to direct in a New York minute

It’s being asked which of this year’s Best Picture nominees will be watched by film buffs 50 years hence. Just as I’ve watched (and will watch again) a 50 year-old Korean War film called Pork Chop Hill, I can’t imagine The Hurt Locker not being a fascinating timepiece for those looking to absorb what the Iraq War was for U.S. troops. And just as Ben-Hur is a necessary flick to own (especially when it finally comes out on Blu-ray) or at least see once, who can imagine Avatar not being a essential sit in 2060?

“This week President Obama is hosting a bipartisan gab-fest at the White House to try to tease out some Republican votes for health care,” Salon‘s Robert Reich wrote this morning. “It’s a total waste of time. If Obama thinks he’s going to get a single Republican vote at this stage of the game, he’s fooling himself (or the American people).

“Many months ago, you may recall, the White House and Dem leaders in the Senate threatened to pass health care with 51 votes — using a process called ‘reconciliation’ that allows tax and spending bills to be enacted without filibuster — unless Republicans came on board. It’s time to pull the trigger.”

Three reactions to the weekend’s box-office tallies: (a) Shutter Island began the weekend with $14 million earned on Friday, but it was down to $10,792,000 — a 34% drop — on Sunday, which of course is due to word-of-mouth and grumbling about that Marshall Fine guy leading us astray; (b) Public opinion also resulted in The Wolfman earnings plummeting 76% from last weekend; (c) Avatar’s domestic cume now stands at $687,851,000 — only $13 million shy of the $700 million mark.

I have to see Avatar in IMAX3-D one more time before it gets pushed out by Alice in Wonderland. It’ll be viewable in other 3D formats down the road, of course. Cameron reminded me during the Santa Barbara Film Festival that there are now stereoscopic 3D laptops hitting the market, and of course we’re seeing more and more displays of 3D flatscreens. But I can’t imagine the IMAX 3D presentation I saw last December at Lincoln Square being topped by anything. One last time, one last time…