Support on Patreon Follow @wellshwood
98 Comments
Who Loves Ya? 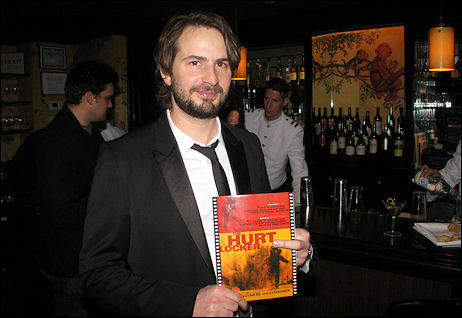 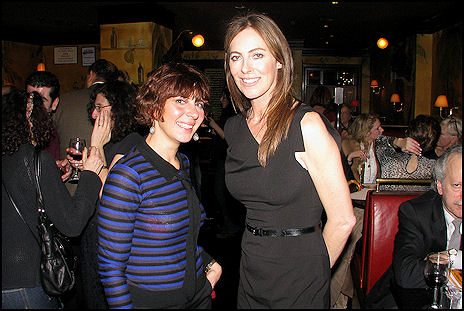 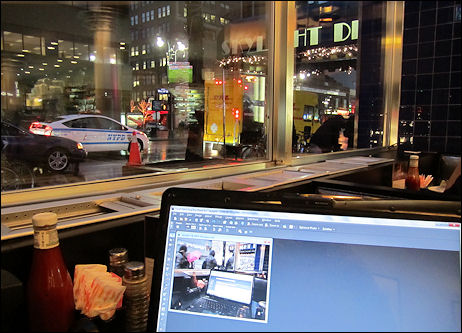 On 12.1.09 Hollywood Reporter columnist Roger Friedman wrote about Howard Lutnick‘s money-betting box-office site known as The Cantor Exchange, or CX. When officially launched on or about 4.20.10, anyone (DZ included) will be able to wager real money and potentially make real money on Hollywood box-office predictions. The site says it expects to receive final regulatory approval less than two months from now. Why, then, am I feeling so indifferent about this? Because the Movie Godz don’t approve — that’s why. Ditto the ghosts of Manny Farber, Frank Nugent, Otis Ferguson, Pauline Kael, Dwight McDonald and Andre Bazin.

Vanity Fair‘s John Lopez has gotten hold of an early draft of James Cameron‘s Oscar acceptance speech, should fortune smile. Except it’s not funny. We all know the cocky “king of the world” Cameron but that was codefied 12 years ago. Which means the Lopez thing is similar to someone repeating the old Marlon Brando-as-Marc-Antony joke (“Friends, Romans, Countrymen — I got sumpin’ I wanna tell youse”) in 1965, or twelve years after Joseph L. Mankieweicz‘s Julius Ceasar.

I’m not trying to be dull or unresponsive, but there’s simply more to Cameron than this. People resent the scope of Avatar‘s success (the haters are out in force like they were in ’98 after Titanic‘s worldwide blitzkrieg), but he’s just not the asshat that some people used to claim he was. If he were Lopez’s riff might be half-funny. Cameron up-close is a little bit like Buckminster Fuller or Arthur C. Clarke. He’s also a metaphor for what it takes to produce something really grand and far-reaching that connects with people worldwide. You can’t smiley-face and soft-shoe-shuffle your way to where Avatar is today..

I know it kinda hurts to write something that feels funny (and which your office homies insist is funny) only to hear the opposite from someone like myself. I’m sorry. I mean none harm.

In an interview with Hurt Locker director Kathryn Bigelow, The Wrap‘s Steve Pond mentions the charge that her film doesn’t take a political point of view,” but then adds that “it seems clear to me that you have a pretty strong point of view…as you say, it’s a hellish situation and we have no business sending our men into it.”

To which Bigelow replies, “Well, that’s certainly my feeling. I’m a child of the ’60s, and I see war as hell and a real tragedy and completely dehumanizing. You know, those are some of the great themes of our time, and we made a real effort to portray the brutality and the futility of this conflict. I guess my feeling is that graphic portrayals of innocent children killed by bombs and soldiers incapable of surviving catastrophic explosions…I think that’s pretty clear. And then also, to add to that, the movie opens with a quote, ‘The rush to battle is often a potent and lethal addiction, for war is a drug.’ So it’s definitely taking a very specific position.”

I’ve always thought that the adrenaline-rush aspect of The Hurt Locker — pretty much the central theme or through-line — is the same kind of charge that cops or mountain climbers or war photographers or journalists who cover wars from the front or firemen seem to thrive on. You can step back a few paces from The Hurt Locker and say “yep, that sure is a deplorable situation” that Sgt. James and the boys are in,” and you could call Bigelow’s depiction of their day-to-day situation “political,” but the strength of the film is that it’s so far inside the excitement in James’ head that thinking about the political aspect almost seems like a homework assignment. When I think of The Hurt Locker I think of Queen’s “Don’t Stop Me Now.”

I’ve read an October 2009 draft of Allan Loeb‘s Untitled Cheating Project (a.k.a., Your Cheating Heart), which will costar Vince Vaughn and Kevin James under director Ron Howard. The Universal-funded Imagine project, reportedly based on an idea by producer Brian Grazer, will shoot in Chicago later this year or next. I’m mentioning this because I didn’t much care for Loeb’s script — in fact I almost hated it — and I’m figuring if I say something now it might influence the development. Or not. I don’t care either way. 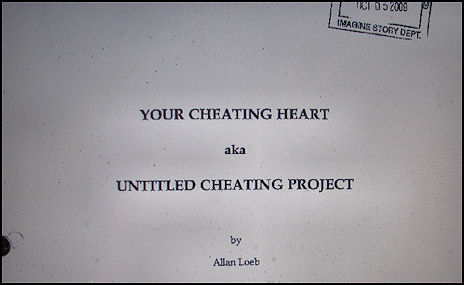 I’m not going to give the story away — just the basic set-up. Vaughn and James will play Chicago-based engine designers Ronnie Valentine and Isaac Backman, respectively, whose significant others are Beth (Ronnie’s live-in girlfriend) and Geneva (Isaac’s wife). The central tension is about Ronnie accidentally discovering that Geneva is playing around on Isaac, and the anxieties and trepidations that stem from his not knowing what to do. Should he just blurt out the bad news to Isaac, his business partner and longtime best friend? And if he does, will Isaac somehow blame him for Geneva’s betrayal? (Guilt by association.) Should he mind his own business and stay out of the lives of others?

I was immediately repelled by Ronnie’s response because — hello? — there’s only one thing to do. In such a situation his loyalty would be to his longtime friend, not the wife, and so one way or the other he’d have to share what he suspects. No guy would have to think about this. He’d start out by stressing to his pal that he doesn’t really “know” anything but that he’s seen something disturbing and that maybe something’s up, etc. And then he’d suggest that the friend might want to hire a shamus to learn the facts or whatever. But come what may you must share what you’ve seen and/or suspect.

The fact that jabbering Ronnie — a guy who’s in denial about almost everything, and who fibs all the time like Alibi Ike and has trust issues with everyone — hems and haws throughout the story is infuriating. By my sights the guy has no convictions or cojones, and who wants to spend 110 minutes with a 13 year-old who mostly goes “homina-homina-homina” when faced with a serious issue?

When I heard about this film I thought — hoped — that it might be a darkly comedic riff on Harold Pinter‘s Betrayal — i.e., about a guy having a longterm secret love affair with his best friend’s (or closet business associate’s) wife or live-in girlfriend. Maybe a little Betrayal stew with some Damage seasoning, minus the father-son dynamic. A story about how a heavy attraction for the wrong woman can sometimes get into your blood like a virus, and how sometimes there’s no shaking it off. But not a tragedy — a telling of this odd tale in a jazzy-clumsy comedic way.

For me, a story about a serious emotional deception that goes on for several weeks or months or whatever would be fascinating. A comedy about how betrayal can happen between people who’ve grown up together and genuinely care for each other but at the same time are starting to faintly dislike each other, and how friends and lovers who are growing apart often seem to cut their ties in a passive aggressive way (i.e., by indirectly persuading the other person to reject them).

All to say that that Loeb’s October 2009 draft is a real drag because it’s about a guy-guy (i.e, similar to the characters Vaughn played in The Breakup and The Wedding Crashers) who doesn’t know the first thing about being a solid, stand-up friend when the situation demands this. I was thinking as I read it that I don’t know anyone like this (i.e., an antsy little child), but maybe beer-head and onion-ring guys who watch the Super Bowl are like this when they find out that their best friend’s wife is doing the out-of-bounds nasty.

“Once upon a time, the Oscars were THE awards show,” recalls critic Marshall Fine. “Literally. The Emmy Awards and the Oscars were the only awards shows that were broadcast — those and the Miss America Pageant. They were events. They carried weight. They meant something, or at least we thought they did.

“Now Miss America is crowned on basic cable, the Emmys give out so many awards that I’m surprised I don’t have one, and the Oscars seem to come so late that I don’t even care about those movies anymore.

“Seriously: Inglourious Basterds came out last August. The Hurt Locker was released in June (though it had been kicking around at festivals since the previous September). And I saw and wrote my review of Avatar more than three months ago, [and] everyone in America has now seen it twice. Sorry, but I’ve moved on.

“By coming last, the Oscars are now victims of awards fatigue: the National Board of Review, the SAGs, the DGA, the Writers Guild, the Producers Guild, the Golden Globes – and of course, the endless awards from various critic groups around the nation. (I vote in two different New York groups, including the granddaddy of all of them, the New York Film Critics Circle).

“And you expect me to still get excited by the Oscars? It’s March and we’re still talking about last year’s movies?

“If they want to pump up the excitement that’s been missing from Oscar in recent years, the solution isn’t inflating the Best Picture category — it’s getting an earlier start. Find a way to streamline the process. Announce the Oscar nominations on Jan. 2 and give them out on Feb. 1, perhaps in a Super Bowl pre-game show.”

HE reader and Tim Burton buff Michael Mayo saw Alice in Wonderland last Thursday at Hollywood’s El Capitan, and, contrary to yesterday’s general opinion, was not only okay with it but actually feels it’s “Tim’s best work in a long time.” Perhaps with a pinch of salt…?

“It’s actually more somber than they’re letting on,” he says. “The setup is that Alice (Mia Wasikowska) comes back as a young adult and finds the Red Queen (Helena Bonham Carter) has taken over and is causing a “reign of terror,” etc. Part of Wonderland has dense vegitation and forests like Pandora, but part of it is scorched and spooky from where the Red Queen had the dragon-like Jabberwock (Christopher Lee) attack.

Johnny Depp plays the Mad Hatter with a soft Scottish accent and is his usual amazing self, making Willy Wonka seem almost normal. (Depp actually recites part of the film, and is wonderful while doing so.) Crispin Glover is actually in the film a good deal as the Red Queen’s consort, reminding me Prince Caspian’s evil brother. Wasikowska is rather good — she reminds me of a young Gwynneth Paltrow. As a cat person you’re going to love the silky, Stephen Fry-voiced Cheshire Cat, who has a larger role in this than the original.

:They’ve also set it up for a sequel, if it does well enough. The CGI is not as good as Avatar‘s, but then nothing will match that film’s visual wonders for a long time. But the design is very handsome and captivating. The 3D looks good, but it’s a little hard to tell because they had all the center seats blocked off for the VIPs so us proles got put on the hard-angled sides where it might not have been as effective. You know the El Capitan — if you’re not in the center, you’re screwed.

“The only qualm I have is that, paradoxically, aside from his usual weird design, this feels less personal than a Burton film. It is far more visually straightforward and almost workmanlike film than Burton’s last few films; parts of it feel like they could have been done by almost any competent director (although this probably wouldn’t have resulted in the same type of performance from Depp.)

“I’m going to be very curious to see how it plays with the public, but I think it will be a hit so I’m not quite sure why they’re keeping the lid on.