Martin Scorsese‘s Shutter Island was the top ticket seller yesterday ($6.7 million) for a second weekend in a row. I have one question — why? It’s laboriously over-shot and over-saturated. Why would anyone recommend it to a friend with any enthusiasm? Is it the word “island” that’s attracting people? Cop Out (Warner Bros.) is second with $5.9 million, and The Crazies (Overture) is third with $5.9 million.

Greenberg costar/mumblecore legend Greta Gerwig during a roundtable session at the Waldorf Astoria — Friday, 2.26, 11:05 am.

To hear it from a trusted research-screening informant, Anne Hathaway‘s performance as Jake Gyllenhaal‘s Parkinson’s-afflicted love interest in Ed Zwick‘s Love and Other Drugs is “wonderful, really wonderful…she knocks it out of the park.” Plus their love affair, he says, is portrayed in strongly compelling terms. Resulting, he reports, in significant deep-down feeling plus some heavy love scenes with ample nudity. 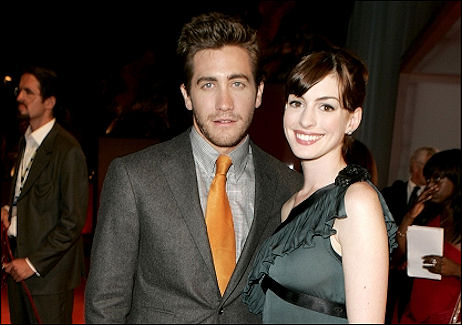 My concern here is with Zwick, a problem director who’s always emotionally overplayed this or that aspect of his films. But my informant, who saw the film last week at Pasadena’s Pacific Paseo, is, in my judgment, a sharp and reliable observer with taste. And — hello? — everyone knows the meaning of a recently Oscar-nominated actress (as Hathaway is/was for Rachel Getting Married) returning with another powerhouse performance that involves coping with a delibilitating disease.

Hathaway’s Love and Other Drugs performance, in short, sounds like the first strong contender for a 2010 Best Actress Oscar.

I don’t know when 20th Century Fox is releasing Love and Other Drugs, but I know it was shooting as recently as last November in the Pittsburgh area. The fact that it’s already being research-screened seems to indicate some kind of fast-track thinking. I would guess a fall release, perhaps beginning with Toronto/Telluride, but who knows? I wrote a couple of Fox guys about this but I guess they don’t work on weekends.

Set in the mid ’90s, the drama-with-comic-flavorings (as opposed to a full-out dramedy) is partly based on James Reidy‘s “Hard Sell: Evolution of a Viagra Salesman.” The IMDB says the script was co-written by Zwick and Marshall Herskovitz and Charles Randolph.

Gyllenhaal plays Jamie, a Jerry Maguire-ish pharmaceutical salesman on the make. Hathaway’s character, Maggie Murdock, is coping with first-stage Parkinson’s disease, and…why am I trying to be the authority here when I haven’t seen it? Here’s how my source put it — his descriptions are ragged and unfocused at times but I don’t have the knowledge to sharpen or hone.

“It’s pretty ambitious story about the mid ’90s Viagra boom and selling pharmaceuticals for Phizer. Hathaway, Hank Azaria. Oliver Platt plays Gyllenhaal’s mentor, and it’s probably the best role he’s ever had, and perhaps his best performance. He teaches Gyllenhaal the ropes, and he has a really great speech toward the end. The story line, which is basically about Gyllenhaal becoming a pharma salesman, is fairly complex. George Segal and Jill Clayburgh play his parents. Josh Gad is the fat younger brother — the Jonah Hill character. 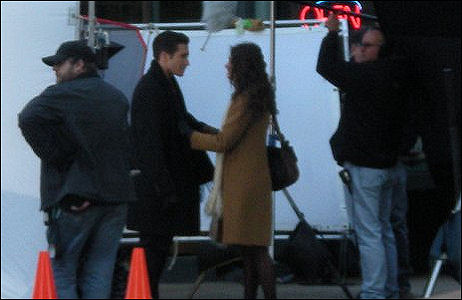 “Gyllenhaal and Hathaway’s love affair is the main thing. Hathaway’s Maggie is coping with stage one of Parkinson’s — a very intense and interesting charatcer, well versed in her sickness. And Jake is trying to sell Viagra, and they meet and are attracted and end up having an affair.

“The most exciting part of the film is their relationship. A lot of nudity, a lot of really well done lovemaking stuff, and some of it that isn’t so good. It’s hard to explain. But Hathaway really knocks it out of the park…she’s amazing, wonderful. Gyllenhaal is not as impressive, in my view. He’s good in this but he can be a cypher. He’s got a pretty narrow range. His character is a really smart guy with no drive…he could have been a doctor but he didn’t do it. He’s a good salesman but also a ladies’ man. But Hathaway dominates.

“So the relationship part is good, the pharmaceutical stuff is good. And like I said, Platt has a great speech at the end.

“Hathaway is so great she’s almost in a different movie. They movie spends some time on the Parkinson’s effects. She and Jake go to a big drug fair, and there’s an alternative convention across the street focusing on organic Parkinson’s remedies, and she goes over to this event. We see some real Parkinson’s people talking up their personal stuff the way the unemployed talked for Up In The Air. At one point she’s shown taking senior citizens across the border to get cheaper drugs in Canada.

“Hathaway is a hard case, in a sense. She doesn’t want a real love affair with anyone because she knows it’s not going to last because she’s fucked. The symptoms of stage one Parkinson’s are intermittent jitters and losing physical ability, hands shaking…she’s in that stage, and taking drugs to control that. But you’re feeling all through it that this is a must-happen relationship.

“The core of the romance is Jake’s overcoming his shallow relationship history, and Anne overcoming her emotionally aloof thing. And she’s really wonderful, absolutely wonderful.” 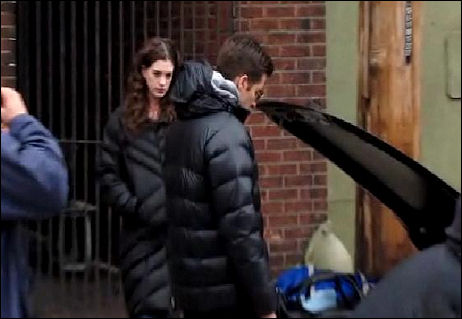 There’s also an IMDB guy who claimed on 2.18 that he attended the same Pacific Paseo screening. The location and date seem to align so here’s what he said:

“I don’t know what I was expecting, maybe just another idiotic rom-com, but this movie is original, funny, unbelievably sexy, and really moving. And it’s about something.

“I have to admit I’ve never been much of a Jake Gyllenhaal fan, but as a slick Viagra salesman he’s not only charming and witty, he’s also got this new warm, strong and quiet leading-man thing going.

“Anne Hathaway burns up the screen, and not just because she’s naked half the time. Even when she’s dressed you simply can’t take your eyes off her. I thought she was good in Rachel Getting Married, but in this one — as a free-spirit arty girl with early-onset Parkinson’s — she’s very funny and really hard-core. My guess is another nomination will be coming her way.

“What else…? Josh Gad, who I recognized as one of the correspondents on The Daily Show, is the potty-mouthed younger brother. Sometimes it feels like he’s a refugee from a Judd Apatow movie, but he’s also sweet and innocent. Oliver Platt, who’s always good, is in it, too. And Judy Greer has got some funny stuff but she seems underused (like maybe they cut part of her story?)

“I’m the big know-it-all who always predicts what’s going to happen next in a movie, but this time I was always surprised. One minute I was laughing hysterically and the next I found myself wiping tears away. Some people will compare it to Jerry Ma-fucking-guire, which I think is a truly great movie. But this one has real depth to it. I’m not sure I’ve ever seen a comedy show a relationship with this kind of intimacy and authenticity. I don’t know how else to say it — I really believed these two people were in love.”

A Roland Emmerich-level earthquake struck off the coast of Chile early this morning, and right now tsunamis are said to be spreading out across the southeast and mid-Pacific area, including Hawaii. If I was a Laird Hamilton-level surfer in the line of fire…