Support on Patreon Follow @wellshwood
79 Comments
Did Reitman Do Himself In?

Last night’s biggest shockaroo came when Precious scribe Geoffrey Fletcher won the Best Adapted Screenplay Oscar, which no pulse-taker had even fantasized about as a remote possibility. It wasn’t in the cards, and yet it happened. 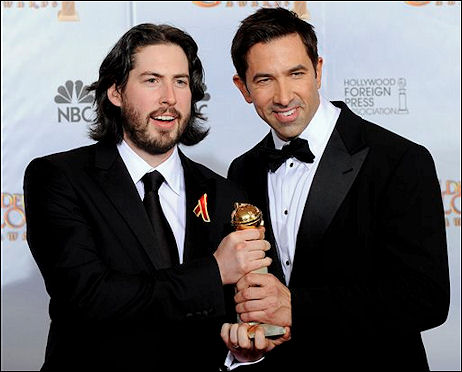 Up In The Air co-screenwriters/non-collaborators Jason Reitman, Sheldon Turner.

Fletcher got all sniffly as he conveyed his heartfelt thanks, and all I could think as I watched was, “This isn’t entirely about you, bro. This is obviously a ‘we love Geoffrey Fletcher and Precious‘ award’, okay, but only partly.”

It’s also…in fact, I suspect it was mainly a “we’re not going to give this award to Jason Reitman for regarding his Up In The Air co-writer Sheldon Turner as an irritant during much of the campaign season, particularly when Up In The Air won the Golden Globe Best Screenplay award, so we’re going to give it to Fletcher instead. We like his screenplay and the film, but this is mainly about not wanting to give the Oscar to Reitman.”

When Fletcher’s name was called out the reaction in the room (or in my room, at least, at 92Y Tribeca) was one of total surprise. We’re talking MAJOR SHOCK WAVES. Reitman and Turner were definitely seen as having been snubbed.

Up In The Air came out of Telluride and Tribeca with a serious Best Picture headwind, and yet the air started to hiss out of the balloon when The Hurt Locker began winning with all the critics and guilds, and particularly when Avatar stomped into the picture in mid December. But Up In The Air is/was still an excellent film. And so a sentiment seemed to grow that the Best Adapted Screenplay Oscar should go to Up In The Air co-authors Reitman and Turner as a makeup award.

My immediate thinking was that Reitman did himself in with (a) that inelegant display he put on at the Golden Globes when he ignored Turner as he thanked the HFPA for the Up In The Air Golden Globe award for Best Screenplay, and (b) that slight air of entitlement that people seemed to get from him.

After the Globes debacle there was a slight judgment current I kept hearing and feeling to the effect of Reitman might be a bit of an ay-hole. I regret to say that I heard that word a lot. That and “dick.” I didn’t agree with it, just to be clear. Reitman probably shouldn’t have radiated a frosty vibe toward Turner, but it didn’t seem like any criminal offense to me. 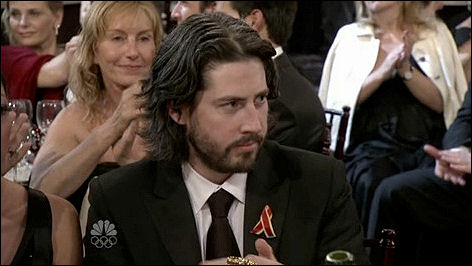 DVR capture of Reitman after the announcement of Avatar‘s Best Picture win at the Golden Globes.

Up In The Air is a beautifully made, very touching and (I think) profound film about America here-and-now and what we all need and want. Everyone knew or accepted that it was being regarded as one of the top two or three, and no one seemed to dispute — even as the Avatar steamroller began to happen in December — that while UITA had fallen back in the Best Picture race that Reitman & Turner would at least get a compensation Oscar for Best Adapted Screenplay….at least that.

But no. Something happened. What I suspect is that “Reitman is a bit of an ay-hole” happened. Particularly Reitman’s look of glum concern when Avatar won at the Golden Globes — remember that photo? I’m saying all this, mind, as a sincere admirer of Reitman and Up In The Air. I have no problem with the guy. I accept that any willful creative person is going to exhibit a touch of assholery every now and then — it just goes with the territory and isn’t that big of a deal. I condemn him not.

In Contention‘s Kris Tapley, another admirer of Up In The Air who’s interviewed Reitman once or twice, says the following:

“I frankly don’t remember his ‘look of concern’ at the Globes (which could have just as easily been concern that The Hurt Locker didn’t win), and he didn’t ignore Turner on that stage, either. In fact, after they unfortunately played Turner off the stage at the Critics’ Choice Movie Awards, Reitman’s position was Turner should speak first from that point on.

“I think two things happened. First was the dust-up surrounding writing credits, which became so pronounced and overstated as to reflect a sheen of animosity, when there was none. That may have found its way into the overall Academy consciousness.

“Second, and most importantly, I think Reitman is getting put in his place after reaching a high level of success so early in his career. This has always been a notion in the ether, but it really rang true for me when I was watching the Best Director category. All of those clips of people talking about the respective nominees. He looked like an absolute baby in the midst of all of that, a true wunderkind.

“And I also think it’s clear the Academy had a level of admiration and respect for Precious. It seemed palpable in the room.”

Last night’s big “what?” moment happened when Music by Prudence won the Best Documentary Short Oscar. Director-producer Roger Ross Williams ran to the stage like an Olympic sprinter and began to say thanks. And then producer Elinor Burkett darted in and pretty much grabbed the mike and took over the shpiel, obviously to Williams’ chagrin. Salon’s Kerry Lauerman reports the story from both parties:

Salon: “People are already saying you ‘pulled a Kanye.’ What happened?”

Burkett: “What happened was the director and I had a bad difference over the direction of the film that resulted in a lawsuit that has settled amicably out of court. But there have been all these events around the Oscars, and I wasn’t invited to any of them. And he’s not speaking to me. So we weren’t even able to discuss ahead of the time who would be the one person allowed to speak if we won. And then, as I’m sure you saw, when we won, he raced up there to accept the award. And his mother took her cane and blocked me. So I couldn’t get up there very fast.”

Salon: “Can you explain the reason behind the conflict?”

Burkett: “The movie was supposed to be about the entire band, Liyana. And the [band members] were very clear they did not want to participate if it ended up being just about one person. The director and HBO decided to focus solely on Prudence.

Salon: “And that led to the rift. But didn’t you see him at other events to discuss what would happen if you won?”

Burkett: “He won’t talk to me! This whole week, there have been events thrown by the International Documentary Association, and he hasn’t passed any of the invitations on to me. The movie was my idea. I live in Zimbabwe. Roger had never even heard of Zimbabwe before I told him about this. And you know, I felt my role in this has been denigrated again and again, and it wasn’t going to happen this time.

Salon: “How do you feel about the final product?”

Burkett: “The final product…it’s not that it’s bad. It’s not what I envisioned when I came up with this project. And it’s not what we promised the boys in the band. It’s just not what we wanted it to be.:

Salon then spoke to Williams….

Salon: “So what happened?”

Williams: “Only one person is allowed to accept the award. I was the director, and she was removed from the project nearly a year ago, but she was able to still qualify as a producer on the project, and be an official nominee. But she was very angry — she actually removed herself from the project – because she wanted more creative control.”

Salon: “But couldn’t you decide ahead of time who would speak?

Williams: “That was handled by the publicist for the academy. I don’t know what they told her. The academy is very clear that only one person can speak. I own the film. She has no claim whatsoever. She has nothing to do with the movie. She just ambushed me. I was sort of in shock.”

Salon: “You seemed to run up there pretty fast. Didn’t you see her coming up the aisle? What did you think was going to happen when she got there?

Williams: “I just expected her to stand there. I had a speech prepared.”

Salon: “She claims she found the movie’s story, that she brought it to you.”

Williams: “No, not at all. The truth is that she saw the band perform [in Zimbabwe], and told me about that, and then I opened up a dialogue with the [King George VI School & Centre for Children with Physical Disabilities] school and went on my own – which you would’ve heard about in my speech — and spent $6,000 going to Africa shooting myself. And when people expressed interest in the film, I asked her to come on board. And then I regretted that decision. Then she sued.”

Salon: “It was quite a tussle. Does this diminish the Oscar at all?”

Williams: “Absolutely not. It’s such a career achievement, to win an Academy Award. This is what the business is. There are times when there’s disagreement and dispute and you always hope that people will rise up to the occasion. It doesn’t diminish it. She disowns it and doesn’t want any part of the film. I’m so proud of the movie.”

Salon: “Did your mother try and block her with her cane?”

Williams: “My mother got up to hug me. And my mother is 87 years old. She was excited.”

Hollywood Elsewhere interjection: Probable bunk! Whenever a child points out the age of a parent in the course of explaining any sort of curious or unusual altercation, what they’re saying is “yes, my parent acted questionably but you have to cut him/her some slack because old people tend to be confused and don’t know what they’re doing half the time.” Which of course is rarely true. Old people are plenty aware of what’s going on at any given moment. They just tend to be a little gruffer or grumpier.