In a piece that ran yesterday (3.12), Toronto Star critic Peter Howell declared that “of the many conspiracy theories advanced for why The Hurt Locker beat Avatar at the Academy Awards, the only one that holds water is based on terrified actors.

“The actors’ branch is the largest single bloc amongst the academy’s nearly 6,000 voters,” he reminds, “and the thinking goes that flesh-and-blood thespians balked at giving Best Picture to a movie that triumphantly featured computers over humans. A vote for Avatar, rightly or wrongly, was viewed as a vote to put yourself out of a job.”

Not to take anything away from Howell, but he’s echoing a suspicion that The Envelope‘s Pete Hammond had reported about three days earlier, having spoken to various older thesps at a pre-Oscar party last weekend.

Update: Howell has told me he resents an implication that he may have borrowed the idea from Hammond’s column without giving credit, which, being a totally respected pro, he always does when appropriate. He didn’t see Hammond’s column, he says, and based his piece on “discussions with real live sources.” I only meant to point out that Hammond was the first to run an interview-supported article suggesting that the actors killed Avatar‘s Best Picture shot — that’s all. Nothing more than that.

You can’t fully trust Variety‘s Joe Leydon when it comes to South by Southwest reviews. He’s a Houston guy, of course, and I for one have always sensed a certain local-pride spirit in his writings from this Austin-based festival. He also tends to go too easy on genre crap. And so I’m processing his rave review of Matthew Vaughn‘s Kick Ass (Lionsgate, 4.16), which had its big SXSW debut last night, with a degree of suspicion.

This despite an HE friend insisting via e-mail that Kick-Ass “is the real deal — trust me. Maybe a little too wanting to be controversial with the Hit Girl character but this is going to be very big. Cage hasn’t been this good in ages. The movie is a huge crowd-pleaser and more clever than the masses could ever imagine.”

“Vaughn (Layer Cake) and co-scripter Jane Goldman satirize as well as celebrate. Scenes of hilariously overstated violence perpetrated by an 11-year-old girl doubtless will discomfort many and incense quite a few. But this deservedly R-rated Lionsgate release should nonetheless score a knockout in theatrical and homevid venues.”

“Deservedly” R-rated? I think we all know what that means.

I know a bit about Vaughn from Layer Cake, at least to the extent that I know that he’s not exactly Mr. Subtle — i.e., he likes to lather it on and then some.

I’d be into the Robert Rodriguez–Nimrod Antal Predators (20th Century Fox, 7.9) if I was even half-persuaded that Predators will be to the original Predator what James Cameron‘s Aliens was to Ridley Scott‘s Alien — i.e., faster, more intense, emotionally grounded, a general uptick.

But of course, that can’t be. Not with Rodriguez’s B-movie aesthetic defining the perimeters. I respect Antal (Kontrol, Vacancies), but the fact that Rodriguez played Big Alpha Kahuna at last night’s South by Southwest preview tells you it’s basically his film. Wall Street Journal/Speakeasy‘s Eric Kohn filed a report early this morning about the event.

There’s almost nothing in the filing about about Kick Ass, which also screened last night. All Kohn says is that it’s “a vibrant take on the superhero movie genre.” That’s it? In other words, it’s a ho-hummer, a disappointment? It sure sounds that way because his next line says that Rodriguez’s Predators preview “stole the show.” That’s a little bit of a review, no?

Indiewire‘s Anne Thompson called it “a nasty hard-R superhero spoof designed to outrage and delight. And it will destroy at the b.o. when Liongsate opens it in two weeks.” “Nasty”? “Designed to outrage”? In other words, lacking in wit, cleverness, refinement. Sure sounds that way. Made for the animals.

I’ve run my share of typos on Hollywood Elsewhere. Hell, they happen every other hour. And I fix them as quickly as I can. When I spotted this Robert Rodriguez-related typo in a 3.12 Anne Thompson/Indiewire posting from South by Southwest, I knew she’d catch it sooner or later. And she has. But if she hadn’t I would have said that the proper phrasing should have been “he shat out both Predators and his own Machete,” etc. 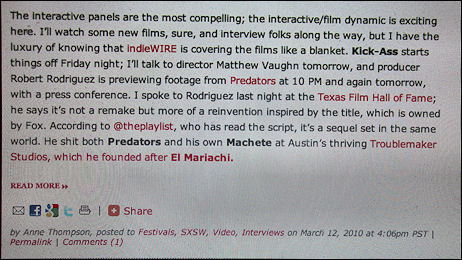 I laughed, of course, because Rodriguez does shit his films out, like all genre wallowers who want nothing more than to operate from their cheesy little comfort zone.