Get Low star and executive producer Robert Duvall said during today’s junket that Crazy Heart director Scott Cooper recently met with Brad Pitt about directing The Hatfields and the McCoys for Warner Bros….if and when Pitt decides to clear a place in his schedule. An excellent script about the legendary family feud of the 1800s has been written by Eric Roth, Duvall said. Pitt’s Plan B would produce with Pitt playing “the main guy,” Duvall said. Duvall would costar, and T-Bone Burnett would do the music. 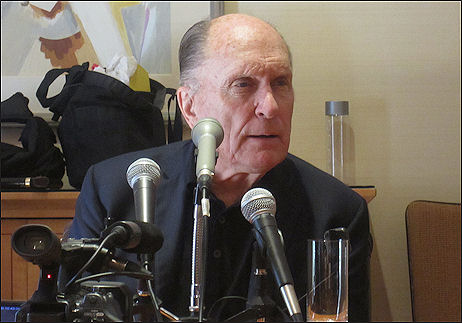 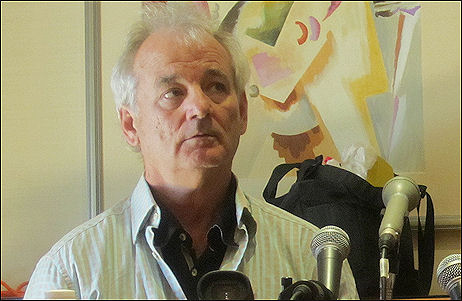 Get Low costar Bill Murray — Tuesday, 4.27, 2:45 pm. I love it when Murray takes a disliking to journalist who ask vapid questions, as he did today in the case of a certain questioner. Go, Bill! 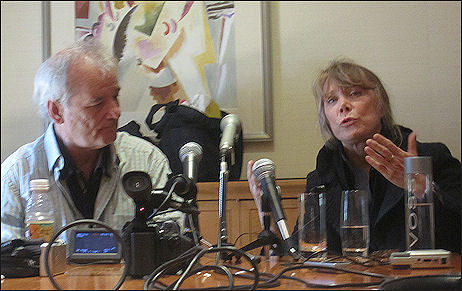 The Cinetic/Film Buff team today hosted a few journalists for lunch at the Half King (23rd St. and 10th Avenue) to discuss various new ventures. Big Kahuna John Sloss and aggressive lieutenant Matt Dentler discussed the basics, which is basically that FilmBuff, the digital distribution label run by Cinetic Rights Management, will release Pelada, a doc about soccer that debuted last month at South by Southwest, in June. And that Collapse, which has been among the top-ten iTunes sellers, will be released on DVD on 6.15. 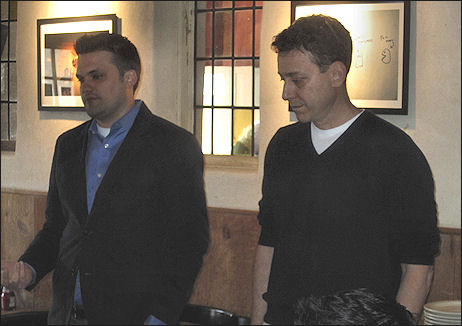 Sloss also mentioned that Alex Gibney‘s Eliot Spitzer doc, easily the hottest film of the Tribeca Film Festival so far, will most likely be at the Toronto Film Festival.

I had to be at a 2 pm Get Low junket at the Four Seasons so I couldn’t stay long, but the Half King has an amazing macaroni and cheese and broccoli dish, and the Shepherd’s Pie is pretty great also.

Previous posting: I’ve been waiting for Nikki Finke or the trades to run a confirmation of John Harlow‘s 4.25 Times Online report that Carey Mulligan is set to play Lisbeth Salander, punk heroine of the bestselling trilogy that began with “The Girl With the Dragon Tattoo,” in an alleged feature to be directed by David Fincher and produced by Scott Rudin.”

Except the report hasn’t been confirmed by anyone, or not to my knowledge. I’ve asked a certain party in a position to know so we’ll see.

Mulligan has “won the approval of Fincher as well as the the family of the late Stieg Larsson, the Swedish author who created Salander,” Harlow reported. “The choice follows weeks of casting rumors, with producers sifting through nearly 5,000 potential candidates,” blah, blah.

I was okay with Neils Arden Opley‘s film version of the first novel, but I wasn’t what you’d call a huge fan. The movie was all plot, plot, plot, plot and more plot. Fincher and Rudin, I would imagine, would make something more formidable.

“Iron Man 2 isn’t as much fun as its predecessor, but by the time the smoke clears, it’ll do,” writes Variety‘s Brian Lowry. Wait — didn’t Edmond O’Brien say that to Robert Ryan at the end of The Wild Bunch? “It ain’t like it used to be but…it’ll do.” Life tends to degrade or disappoint rather than improve. But you have to laugh about it.

“Much like The Dark Knight, this Paramount release brings an enormous stash of goodwill to the party, thanks to a well-crafted origin tale whose popularity fueled anticipation for a follow-up. Yet while the first go-round for this lesser-known Marvel hero benefited from its freshness and visual flair, the beats here are more familiar, the pacing more uneven. Given the demand, though, that will hardly matter, and this armored adventure promises to be a money-making machine that clicks on all cylinders.”

An HE commenter named “t.w.” says the following: “Iron Man 2 is a bit of a mess. Too much squeezed in. Definitely not as enjoyable as the first. I found Downey fairly irritating in this, and Don Cheadle (who replaces Terrence Howard) looked like he would rather be anywhere else. The movie it reminded me of most is Spiderman 3. It will make a fortune at the box office as the masses will eat it up, etc., but it’s a major disappointment to add to this year’s already long list of failures. At least it isn’t in 3D.”

I hate it when I’m framing a shot on a Manhattan street and people who are walking along and about to enter into the frame stop and wait for me to snap the shot. They’re being polite, of course, but in a tediously mundane and American middle-class way, which is to say a form of politeness that says “we don’t get it.” Know this and know it well — people who stop and wait for you to take a shot don’t get it.

If you’re in the shot then you’re in the shot, and if you’re not then you’re not in the shot. If I see somebody about to take a photo on a New York street I walk right the fuck in front of them every time. If I wind up in somebody’s Flickr album then so be it. And I don’t then I don’t. Everyone is in everyone’s else’s photo album, and the chances are it’ll be a better shot if someone happens to wander into the frame. It almost always is.

Most people don’t understand this. A photo taken in a crowded city full of life and energy is always better if something untidy happens. Your shot of Aunt Mabel standing in front of a horse-drawn buggy in Central Park is always improved if a derelict happens to stumble into the shot, or if Glenn Kenny is strolling along the footpath and happens to be captured as he walks by. Or if a cop on horseback is clopping along and becomes part of the shot. Or if a dog wanders into the frame.

Plain old shots of Aunt Mabel standing and smiling in front of a horse are bad pictures because aside from the “say cheese!” aspect they’re about suppressing life in order to create a regulated and somewhat banal thing. In this sense I feel that they represent a kind of middle-class cancer of the soul. Life is not tidy or “posed,” and it wouldn’t hurt if this idea got around a bit more, especially among people from Iowa. Aunt Mabel can still smile if life intrudes into the shot and you can still make sure she’s in focus, but life is not a showroom for Nordstrom bedroom settings.

We’re all “in the movie.” Nothing matters. There is no “privacy.” Security cameras and satellite cameras tape everyone all the time for no reason other than rote surveillance. If a fellow human being captures your puss in a photo it’s at least being done with a personal motive of some kind. Live with it, groove with it, be here now.