Last night I was called a “tragedy” and “pig-ignorant” and “sad” and “lame” and so on by Glenn Kenny and a small team of like-minded thugs for having dissed Abbas Kiarostami‘s Copie Conforme (a.k.a., Certified Copy). In their eyes I was guilty of two offenses. The primary was having said that while I appreciated the purity of mood and technique and mise en scene in Kiarostami’s latest, I found it to be essentially an entombed and lifeless exercise. The secondary was in having used terms that weren’t properly referenced or fully considered enough, or were deemed too hot-dog plain.

What Kenny and others on this thread meant is that there is a Code of Film Dweeb Thought & Behavior, and one of the boldfaced proclamations (found on page 39) states that respected directors from Middle Eastern nations who make highly refined “art for art’s sake” films must always be spoken of in hushed reverent terms and cannot be faulted for the sin of lifelessness, particularly during important cultural gatherings like the Cannes Film Festival.

If you defy this edict and talk about how cinema feels and plays in plain terms — the terms by which most people perceive and absorb movies — Film Dweebs will go Defcon 5 and use whatever withering retorts and diminishments they can think of. Same thing if you dare to speak bluntly and disapprovingly of Douglas Sirk, another Dweeb God.

Film Dweebs are invested in a culture that obviously flourishes online (obviously a great thing) and which holds roll calls at the main film festivals, which act as a kind of professional and cultural life raft, but it is an insular culture protected by a moat and attack dogs (i.e., uglies like Filmbrain) and thick castle walls, and that dreaded substance referred to in some quarters as “everyday hotdog-eating reality” is not permitted inside.

I fell deeply in love with Nuri Bilge Ceylan‘s Three Monkeys here a couple of years ago. That was okay with the Dweebs, of course, and I certainly wasn’t savagely attacked for this because, cutting to the chase, Ceylan belongs to the same elite fraternity as Kiarostami.

But the basic rule stands — i.e., Cannes is a major mecca for Dweebs because it not only focuses worldwide attention upon their passions and whimsies but is one of the few occasions or platforms from which they can really strut their stuff, toot their horns, beat their chests and go nuts for pure-exercise films like Copie Confirme.

One should never argue about religion or politics, it is commonly said, because they’re highly sensitive issues — tethered to primal, deeply cherished beliefs and extra-sensitive emotional nerve endings. You will always get into arguments that you regret, and speak more heatedly and hurtfully than you intended.

The ugliest brawls on this site have come from the words of ardent fanatics and true believers, and what are Film Dweebs if not an amalgam of politics (i.e., looking to fortify and sustain their ranks as long as members have demonstrated sufficient loyalty to Film Dweeb favorites and concepts) and religion and a kind of aesthetic fanaticism? It explains why these discussions are so rank with contempt and disdain and flying spittle.

Kenny can call me a tragedy if he wants. But I despise his despising and general lack of civility when such matters arise. It is genuinely unattractive.

I’ve said before that I’ve been onto Glenn and his cloistered kind for a long time, in part due to having suffered under Dweeb rule and their monk dictums, which is to say there was a period during my early struggling days in journalism when I had to grovel at their feet and speak very carefully in their presence in order to survive. I obviously relate to and feel more aligned in many if not most respects to Dweebs now than I do to the vulgarians at the other end of the scale, but calling a spade a spade as far as the Dweeb agenda is concerned feels awfully satisfying on this end.

Abbas Kiarostami‘s Copie Conforme (a.k.a., Certified Copy) is what most hot-dog-eating humans on the planet earth would call a “dead movie.” You know…a movie with lofty pretensions and perhaps an echo or two of Yasujiro Ozu that nonetheless lacks a discernible pulse because the director-writer has crawled so far up his own ass that he doesn’t know the difference between real sunlight and imaginings of same?

During such moments you have to step back, take a breath and just go “okaaaay.” Or, as James Rocchi has been known to say, “What do I know?”

Certified Copy is a two-character endless dialogue movie set in and around San Gimignano, Italy — one of the worst places in the world, incidentally, because of the busloads of horribly-dressed Middle-American tourists that flood this city during tourist season.

The characters are James (William Shimell), a self-centered, snooty-fuck writer with carefully cut gray hair who has a little free time after discussing his new book before a small book-store group, and an attractive French-speaking woman (Juliette Binoche) with a 12 year-old, self-absorbed, pain-in-the-ass son who needs to be taken out behind the woodshed, have his pants and underwear pulled down and whipped with a leather strap.

James and whatsername meet and decide they half-like each other, and about 30 or 35 minutes later decide to start pretending they’re husband and wife. The game gradually becomes darker and darker, and before you know it you’re not entirely convinced they weren’t playing a game to begin with. But the idea — one created by dweebs, aimed at dweebs and certain to be endlessly discussed by dweebs — has something to do with determining the natures of games vs. reality, originality vs. forgeries, truth vs. imagination and so on.

I didn’t hate every minute of it. It is informed by a certain purity of mood and technique and mise en scene — always the mark of exceptional high-end filmmaking. I was half-engaged at first, but common sense disengaged me within 45 or 50 minutes. And yet I stuck it out to the end. I stood, I sat, I leaned against a wooden panel. And people were booing as the end credits appeared.

This clip from this morning’s Biutiful press conference is visually underwhelming, to say the least, but it offers a good explanation from Javier Bardem and Alejandro Gonzalez Inarritu about what the film is, what they were after and so on. Toward the end of my taping a young festival guy came over and began nudging and whispering that I shouldn’t tape during the conference. Sure thing. 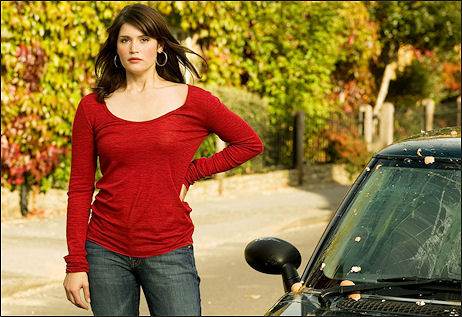 The digital loading rates are slow as usual in the Orange cafe (my video was converted to mp4, but You Tube won’t even appear) and now I have to get myself to the 1 pm screening of Stephen Frears‘ Tamara Drewe, which starts in 23 minutes. 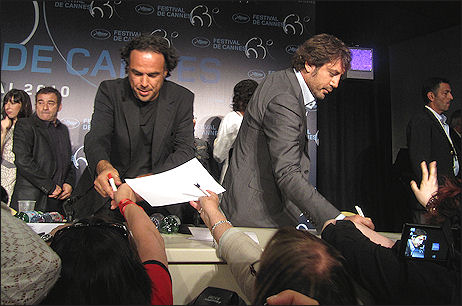 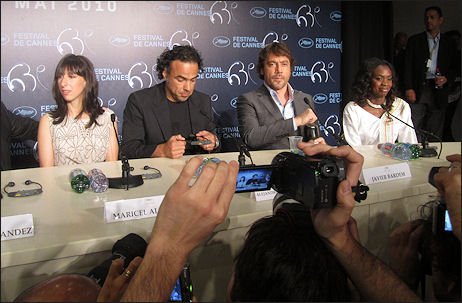 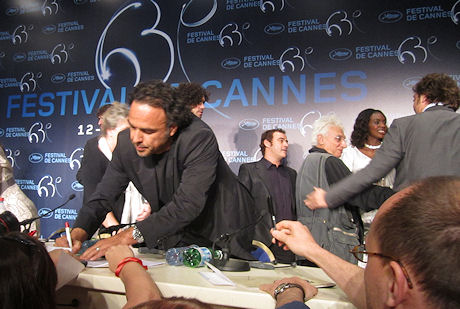 Alejandro Gonzalez Inarritu‘s Biutiful, which ended about fifteen minutes ago, is a sad, deeply touching hard-knocks, lower-depths drama in the tradition (or along the lines, even) of Roberto Rosselini‘s Open City or Vittorio DeSica‘s The Bicycle Thief. How’s that for high praise out of the gate?

Set among the poor and deprived in Barcelona, it’s about love and caring and continuity and carrying on among those who have it toughest, and dealing with guilt and tradition and the approaching of death and all the rest of the stuff that we all carry on our backs.

Every actor is exactly right and spot-on in this film, but Javier Bardem gives a truly magnificent performance in the title role of an illegal migrant labor and street-vendor manager-facilitator. He looks right now like the most likely winner of the festival’s Best Actor award just as Biutiful itself seems well-positioned right now to take the Palme D’Or.

It starts out brilliantly, and then slips into a longish character-introducing, character-building, filling-in-the-details phase that goes on for a 90 minutes or so, and then — bit by bit, and then in increasing increments — it starts to emotionally kick in. And that’s when I knew it was delivering something special.

I have to stop writing because the press conference is just starting.