I’m hearing that the People’s Republic of China has a really big problem with Phillip Noyce‘s Salt (Sony, 7.23). Not one of those “scenes must be removed before your film is allowed to play in China” problems, but a “sorry, but no amount of edits will satisfy us” problem. Meaning that Salt is apparently cinema non grata in that country until further notice — no theatrical bookings, no DVDs, no Blurays.

Which, of course, means a huge opportunity for Chinese video pirates and a huge potential loss for Sony Pictures.

I don’t know anything beyond this nugget. What is it about Salt that China finds so objectionable? It’s about a possible covert operative (played by Angelina Jolie ) — a kind of Odd Woman Out whom everyone suspects is some kind of sociopath or double-agent ne’er -do-well, or is dangerously disloyal in some way, shape or form. What her character has to do with China or its policies is a mystery to me. And to others, I gather. The shut-out hasn’t been conveyed “officially” but I’m told it’s a done deal.

One of the three big tracking companies has Salt running just a teeny tiny bit behind Inception in terms of the usual categories — awareness, unaided awareness, definite interest, first choice and top-three-choices. Inception is opening a week earlier than Salt, of course, and has been marketing fairly steadily while Salt is just turning the heat on.

One significant factor, it appears, is that Salt‘s definite interest is in the strong 40s among older and younger men and women. (The Angie factor, of course.) I’m waiting for Inception breakdowns as we speak (any minute!), but one presumes that it’s probably tracking a bit stronger among men than women. That Nolan-ish thing. But then presumptions and $1.75 will get you a bus ticket.

I don’t know what to do with this Angelina Jolie interview in the new Vanity Fair. She’s as beautiful as ever with a great pedicure, and I’m looking forward to Salt as much as the next guy, etc. But everything she says here is so gracious and settled-down and serene. What are you supposed to do with a q & a like this? She’s hot, cool and fetching, and I’m not…you know, complaining. But what are you supposed to do with this? 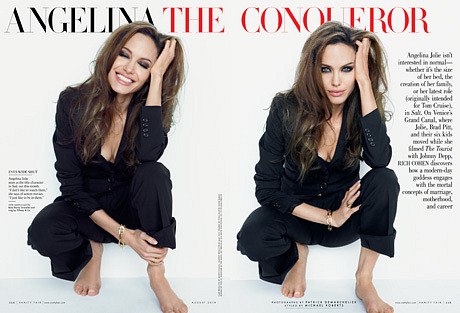 She loves Brad Pitt in any guise, even his Old-Man-River beard. She and he might do a sequel to Mr. and Mrs. Smith. (God.) She’s aware that having too many kids might result in none of them getting enough attention. It’s great to be able to chill and stroll around in Venice and not have to worry about anything.

Why didn’t they have her talk to George Wayne ? At least he would have had the nerve to mention the tabloid stories. 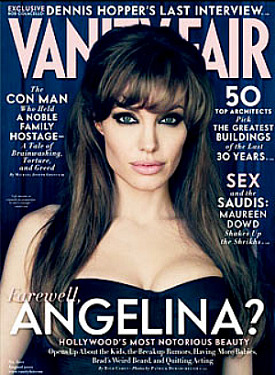 38 Comments
"I Guess I'm The Drinker"

The way Elliott Gould sizes up poker players in this scene makes me chuckle every time. The loose smoky vibe is what sells it. Gould mutters like a jazz musician on hemp, George Segal is nodding sagely and the pretty bartender is chuckling away. Neither she nor Segal are bothered, of course, that Gould is making simplistic assumptions based on cultural stereotypes. That’s actually what funny about it.

The Lyndon Johnson guy with the cowboy hat, the kid who’s seen The Cincinatti Kid too many times, the family doctor who doesn’t take chances, the red-coat guy who used to be a cha-cha dancer, the Ku Klux Klan guy, the Hispanic guy who talks louder than he needs to because he came from a large noisy family, the Oriental prince whose father made a fortune selling egg rolls, etc.

It’s amusing stuff in a shuffling Robert Altman context, or at least most people find it so, but if you were to write something a little bit similar to Gould’s patter in an online column, you’d soon be dealing with some very ornery talkbackers. That’s one difference between 1974 and 2010, it’s fair to say. Not that I would be so idiotic as to mention egg rolls in discussing an Asian-American.

In a piece called “Hush vs. Gush,” Variety‘s Marc Graser and Dave McNary describe the thin line that marketers for semi-secretive, big-budget, hot-buzz movies — like Chris Nolan‘s Inception — have to tread.

The trick is to dispense aroma and atmosphere and a few select details that will make everyone drool, but don’t kill the goose by revealing too much. However, “it’s getting harder than ever to keep a secret in Hollywood,” the Variety guys observe.

“The fast fingers of bloggers (professional and amateur), feverishly documenting every aspect of a film’s development and production on websites and Twitter feeds, have made it nearly impossible for studios to surprise moviegoers these days.”

The Hangover director Todd Phillips states the obvious in saying that “the word gets out very quickly now” and “that quick feedback can make or break a movie.”

A marketing exec comments that Warner Bros, marketing honcho Sue Kroll “was actually forced to veer away from the typical marketing campaign because Inception isn’t the kind of film that can be easily reduced to a single catchphrase, although ‘Your mind is the scene of the crime’ and ‘The dream is real’ certainly try.

“‘It’s really a counterprogramming campaign in the extreme,’ the exec says. ‘The studio knows it can’t position this like another tentpole, even though it is a tentpole.'”

I need to say one thing about Inception, and it has absolutely nothing to do with marketing. We all know it contains a big third-act revelation, but I don’t want to see one in which we’re told that most of much of what we’ve seen happen in Act One or Two has been imagined, as if in a dream. I don’t want any of that Dallas crap — please. 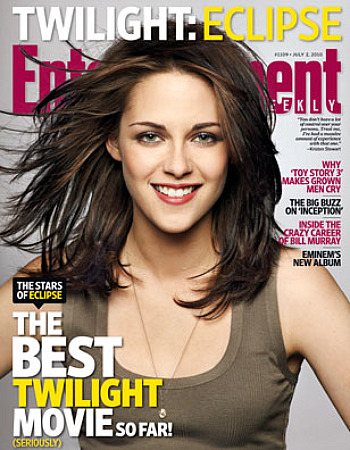 The reason for the uptick, they’re all saying, is director David Slade. I was down with Slade’s Hard Candy but not so much 30 Days of Night .

I’m most impressed by Honeycutt’s praise considering the fact — I need to put this delicately — that he can be a bit of a grump at times. (Like someone else I could name.) I’m figuring if a half-grumpy guy says a popcorn franchise flick like this is okay, you can half-trust him. But you can’t trust positive-minded people who smile and laugh and hug their friends and always say the glass is half-full. I’ll trust happy-face people when it comes to smaller films, the theory being that if a person with a relentlessly sunny attitude likes something that’s edgy or thoughtful or darkly trippy then it might have that open-window element that draws people in.

“While Catherine Hardwicke did a strong job establishing the franchise, Slade is by far the best director,” Thompson says. “And the story of Eclipse, adapted per usual by Melissa Rosenberg, is far more satisfying and well-structured than New Moon, [and] the central love triangle, as both men press their suits with Bella, is front and center. All three actors are comfortable with their characters, and Slade finds the right balance of action and romance; the story feels organic.”

The one “uh-oh” is Honeycutt’s line that “the CG wolves, huge creatures whose ferocity fails to mask their tenderness, are very cool.” That’s an ixnay, I’m afraid, if they’re the same size as the New Moon wolves. Those were the silliest-looking beasts I’ve ever seen in a supernatural fantasy film, bar none. And what does Honeycutt mean about “tenderness”? Wolves can’t be tender except to their own young.