Six-plus years ago screenwriter William Goldman (Marathon Man, All The President’s Men, Butch Cassidy and the Sundance Kid), explained what a “drop out ” moment is — i.e., when something happens that just makes you give up interest and faith in a film. He cited a bit in Sofia Coppola‘s Lost in Translation.

He observed that as the film begins, Bill Murray‘s character “has just been in a movie where there is a fabulous vehicle chase, buses destroyed, explosions and, we find out, he did his own driving.” Murray, in short, “is playing a famous action star.

“Look, I started following him over a quarter-century ago, on Saturday Night Live Live and in the movies, from Meatballs on, and maybe in real life he can kick the crap out of Harrison Ford and maybe stripped he has pecs that make Arnold Schwarzenegger look flat-chested — but I do not believe this, not for a New York minute.

“Murray is a comedy star. He’s goofy and he fumbles, and the minute you try and shove this other persona at me, make me think he is the toughest guy on the planet, sorry, I do not go there.

“And I stopped, from this moment on, believing in this flick. And when belief goes, caring is right behind.”

Movies are rife with “no sale” moments these days, but I’m presuming there are standouts among the readership. I’d pop in a few myself but I have to get to the airport.

I’m not trying to sound like an asshole but I don’t like Keir Gilchrist, the kid playing the kid. He’s too dweeby looking, too deadpanny, like a young Jack Webb or something. Sorry, but seeing or not seeing a movie comes from snap judgments like this one. It’s Kind of a Funny Story (Focus Features, 9.24) is from director-writers Anna Boden and Ryan Fleck (Half Nelson).

61 Comments
My Guitar Wants To Kill Your Mama

Are you man enough for Inception? Or are you a punk who runs for cover when challenged or threatened? It’s early Tuesday evening at the Lincoln Square plex, and the lights go down and I’m telling myself, “Okay, just remember…this is primarily about Leonardo DiCaprio‘s family issues (a bit like what his character was dealing with in Shutter Island, only in a trippier and more GQ vein), and that Marion Cotillard‘s ‘Mal’ is the monkey wrench, and there are three dream states (deep, deeper and deepest), and bathroom breaks are out of the question.

But soon my mind is bouncing around inside a huge padded dryer set to “air only” and then plunging off a cliff and dropping down an elevator shaft and being whipped around every which way, filled with everything in Chris Nolan ‘s head as well as my own, and the fusing of all this feels a little cranked and crazy.

I’d seen Salt a few hours before and had gone through the basic sifting and processing of that, and here I was in a kind of visual wind tunnel with my cheeks inflating and my hair getting flattened and my finding it hard to have and to hold and…whatever, keep it tidy. Yes, Inception is a cold, cerebral grand-design thing. Yes, I agree that it’s more Michael Mann than Stanley Kubrick (which somebody, I forget who, wrote a day or two ago). And yes, it’s hard not to feel awed.

And yet the damn sound at the Lincoln Square is pissing me off hugely because the dialogue isn’t that crisp or clear — not the way it’ll sound when I’ll watch this film on Bluray five or six months hence — and so I’m cupping my ears half the time despite being only about six or seven rows from the screen. Is it because I’m sitting too close? Are the consonants flying over my head? I can’t understand most of Ken Watanabe‘s dialogue to save my life, and yet every word Michael Caine is speaking comes through clear as a preacher’s sermon.

If only I was sitting ten rows back with Kathryn Bigelow, who’s about to start shooting that HBO/John Logan pilot and is sitting in the reserved section with two pallies.

I’m reminding myself to say at some point that Inception is always intriguing, and often (particularly during the last 40-plus minutes) exhilarating. Do I really mean infuriating? No, I mean exhilarating. I think. Highly engaging, thrilling, confusing…oh, I see, I’ve got it. I’m okay now. Wait…I just missed that. What’d she say? Doesn’t matter. The main plot points are coming fast and furious and being assembled with due haste, but it’s not easy. I’m glad I “studied” beforehand.

If Inception is a masterpiece, and 65% or 70% of me thinks it probably is that, it’s one for the record books because every so often it makes you want to shoot yourself in the head. Not to commit suicide but, like DiCaprio’s con artist/thieves/dreamers do when they want out of dead-end situation, to wake up and take yourself out of the tumbling landslide narrative and take a two-minute break so you can suss it out. 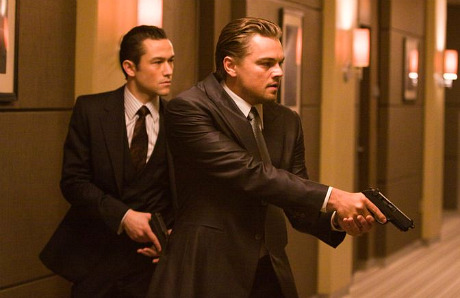 Have you got your rifle set to stun? Wait…is that Devin Faraci on a ski slope, wearing a white parka and giving me the finger? Or Drew McWeeny? No, it’s Dileep Rao. Either way, don’t shoot! Calm down, stay focused…but how does this happen when you’re tumbling over and under like the passengers in a large white van that’s gone off the road and is somersaulting down a hillside, and in a slowed-down time realm yet? Until everything shifts and you’re in one of three (or is it finally four?) dream states.

Should I wait for the “kick” that’ll release me upward, or do I try and make one happen on my own? Oh, that’s right — I’m not in control here. Nolan is. And he’s too caught up in his own razmatzz to care about one guy in the sixth row at a press screening.

So you have to quantify, calibrate, find order, sort through. You’re throttled on one level but not quite keeping up with this thing the way you feel you should, and at the same time a voice is saying “this way madness lies” while another is saying “just hold on!” And then the big mind-heist sequence finally begins around the 100-minute mark, and it gets wilder and fruit-loopier by the minute and you finally start to feel what it’s all about. It’s not about sorting stuff through and making linear sense of it all (although you can if you want). It’s about surrendering. You can’t logically process your way into satori. You have to let it all in.

And once I did I began to laugh. I laughed when Marion Cotillard, dressed in one of those white Devin Faraci parkas, descended in slow-mo into the scene of much snow-covered chaos, determined to screw things up even further. I laughed when the guys in the van hit the water (after plunging off a bridge and falling for about 15 minutes) and Ken Watanabe made a face that seemed to say, “Jesus Christ, I’m fucking underwater and I don’t know what to do…maybe if I just look like I’m passing out? Or that I’m stressed and anxious to breathe? No, that’s too obvious.”

Have I made Inception sound too complicated? I don’t actually think it is that, not now anyway, but I know how I felt last night. I really couldn’t hear between a third and half of the damn dialogue and so I was putting it together as best I could based on the sentences I could understand and the reviews I’d read. And DiCaprio and Ellen Page do sort through the basics fairly thoroughly in Act One, explaining the whole stealing-of-secrets concept and the meaning of inception (i.e., the inserting of an idea in the mind of a mark). 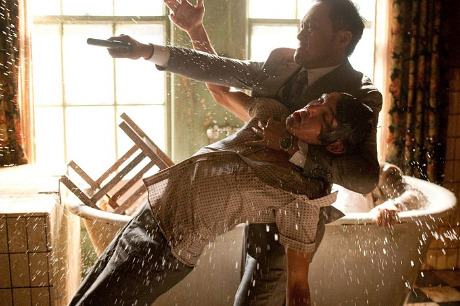 Even if it’s too complicated for you, it’s the right kind of complicated. Sometimes a good grapple leaves you feeling stronger, more awake, more alive. This is one of those times.

And all hail Joseph Gordon Levitt‘s performance, by the way. He feels like the most commanding and sharply focused, the guy to watch after Leo, who does his usual hard-core suffering thing. Ellen Page, Tom Hardy, Watanabe, Cillian Murphy, Tom Berenger, Cotillard, Pete Postlethwaite, Caine, Lukas Haas — everyone ups their game and delivers like a champ. But it’s not an actor’s movie. They’re all just figurines in the landscape.

I’m man enough for Inception, yes. I’m seeing it again in IMAX (and hopefully with much better sound!) at the Sony Metreon in San Francisco this weekend. There are tons of reviews out there now, and if you want to read a careful sorting-through of what the plot strands actually amount to, you know where to go. Suffice to say it’s about DiCaprio trying to get free of some bad business in his head, and about that tiny little spinning dreidle and those ticking clocks and safes and crashing waves and…whatever, Nolan going all Nolan on us.

As Jett and I were riding down the escalator following the screening, I said something about not fully understanding how Cotillard’s character got so caught up with advanced dream surfing in the first place since she was never working as a team member in one of DiCaprio’ss mind capers, so how exactly did she get exposed to all this? Because she was his wife and not part of the “business,” etc. And four younger women standing right in front of us on the escalator heard me and immediately turned around and said “Yes! Yes! Us too…yeah! What was that?”

Does Warner Bros. have any idea how cold the Eloi are going to be on this film after the first weekend? A lot of them are cold on it now because it isn’t a sequel or a TV show or some brand that’s been hammered in from some other promotional effort of the past. Inception‘s first-weekend estimate is said to be in the vicinity of $40 or $50 million. The chilliness of Inception will do it in with the hoi polloi, but If I could wave a magic wand I would command every Average Joe out there to sit through this film and grapple with it as best he/she can.

Everyone with half a brain is going to see Inception over the next couple of weeks, and for all my struggling I can’t wait to go again. It’s a pain-in-the-ass landmark film — a cinematic stretching and weight-lifting exercise that makes you feel strong and brave at the end of the day. It is time and money well spent, and Warner Bros. deserves a salute, I feel, for funding it. (Although we all realize they won’t have touched it if Nolan hadn’t first given them The Dark Knight.) I think it’s a safe bet to be nominated for Best Picture, Best Director, Best Original Screenplay, Best Editing, Best Musical Score, etc. It made me feel as if my mind was being pulled like turkish taffy, but it’s a very good thing to live in a world in which highly intelligent $160 million mindfuck movies are still being made.