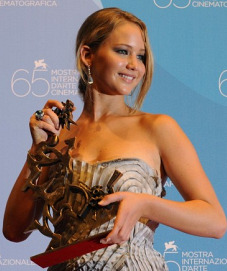 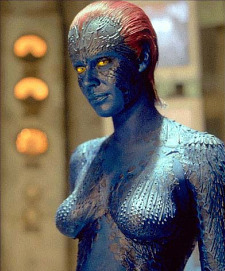 If I do say so myself, the shot used for the cover of Criterion’s forthcoming The Thin Red Line DVD/Bluray (out on 9.28) is exceptional, and so is the creased paper/folded magazine design. Terrence Malick‘s wack-a-doodle decision to all-but-eliminate Adrien Brody from this film nearly killed the latter’s career. It was saved, of course, by Roman Polanski‘s The Pianist. 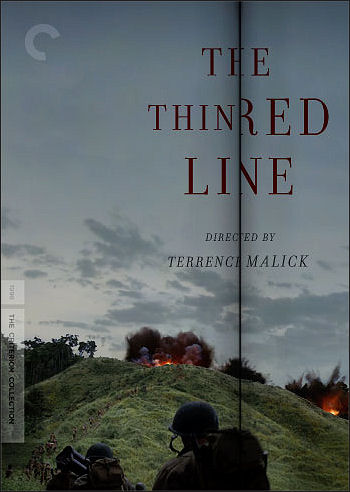 [Moises edit 7/16: For the record, I’ve been corrected on my incorrect assumption regarding aspect ratio in the comments below. Please extinguish the torches.]

“The accomplishments of Inception are mainly technical, which is faint praise only if you insist on expecting something more from commercial entertainment. That audiences do — and should — expect more is partly, I suspect, what has inspired some of the feverish early notices hailing Inception as a masterpiece, just as the desire for a certifiably great superhero movie led to the wild overrating of The Dark Knight. In both cases Mr. Nolan’s virtuosity as a conjurer of brilliant scenes and stunning set pieces, along with his ability to invest grandeur and novelty into conventional themes, have fostered the illusion that he is some kind of visionary.” — from A.O. Scott‘s N.Y. Times mostly dismissive review of Inception. 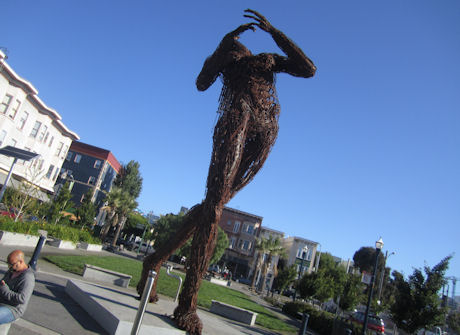 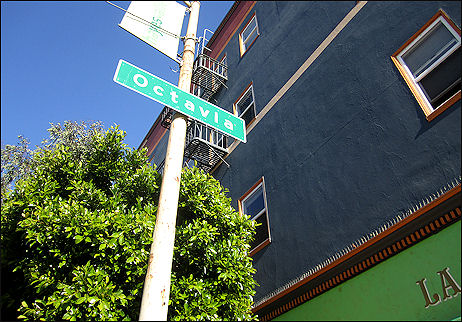 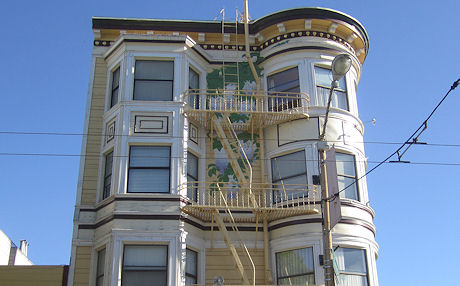 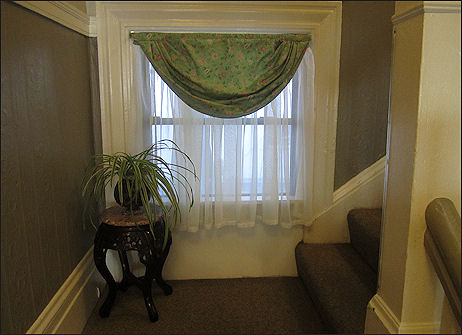 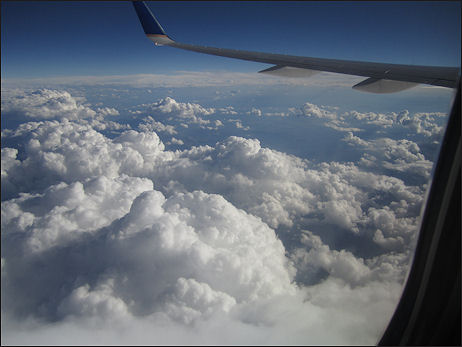 “Five people stuck in an elevator, and one of them is the devil.” Obviously a catchy hook, although it should have ideally been shot 50 years ago as a half-hour Twilight Zone episode. Although produced by M. Night Shyamalan and based on a Shyamalan “story,” the screenwriter of Devil is Brian Nelson, and the co-directors are Drew Dowdle and John Erick Dowdle.

I feel good about this because I’m down with the leading cast members — Chris Messina (Vicky Christina Barcelona, Julie & Julia), Geoffrey Arend (husband of Christina Hendricks) and Bojana Novakovic.

Whenever I see that Zach Galifianakis beard, I go “all right, here we go again…the unbridled, unregenerate, barrel-chested man-child in another comedy!” Todd Phillips‘ Due Date (Warner Bros.) is due on 11.5.

It’s being suggested by Sasha Stone and David Poland that Warner Bros. publicity pretty much engineered the Inception backlash by giving that early looksee to the online Cool Kidz (i.e., bloggers like Faraci, McWeeny, Pond, Tapley, Stone, Hammond, Gilchrist), which goaded the Second Wavers (straight-critic essayist types like Edelstein, McCarthy, Zacharek, White, Pinkerton, Reed) to slap down the Cool Kidz for being impetuous and overly fawning.

“The situation was set up improperly,” Stone writes. “Critics are the elders of the tribe. They see themselves as a cut above everyone else but more than that, they have to see themselves as above the bloggers because, goddam it, not just any old person can have the keen insight [that critics] have and not just any old person can write about film, define film, set a film’s place in history the way they can.”

“I think WB had good intentions on this one,” Poland comments, “but I’m not sure this approach worked either. I was not the only one who was a bit put off by the intensity of and the metaphors used by the positive wave from the first group of reviews.” He claims that “the first ‘backlash’ was not backlash at all, but opinions of the film that felt compelled to point out — as my review did — some of the silly overreaching in the first wave of post-Travers reviews.” Poland means Devin Faraci’s tab-of-ecstasy multiple-orgasm review, I suspect.

“WB tried their own hybrid process to the embargo situation,” Poland summarizes. “First, they junketed. And [then] Peter Travers, who was quoting for the studio, screwed the embargo all on his own. Still, the studio took the heat and set a screening when they were comfortable with reviews starting, which was still 10 days before opening.

“Then, confident with the film and still under fire, they moved the screening for an early review date up by 5 days. About a dozen outlets, including the trades and some non-critics, saw the film and agreed to wait 3 days, to a specific date and time of day, to review. Two days later, every other ‘major’ in NY and LA was able to see the film and the embargo was pretty much busted.”

In short, did the Cool Kidz (with WB publicity’s aid and encouragement) indirectly fuck things up for Inception? Did they inadvertently trigger a backlash mentality — a few drops in the well spreading out like blood in the Nile — that may or may not intensify once Average Joe ticket-buyers start seeing Inception tonight (i.e., at the midnight screenings)? I’m not saying this is true — I’m just asking.

My review was neither Faraci orgasmo nor White-Pinkerton-Zacharek negative. I just dove in and found the right balance, I think.

“Even if Inception is too complicated for you, it’s the right kind of complicated,” I said. “Sometimes a good grapple leaves you feeling stronger, more awake, more alive. This is one of those times. It’s a pain-in-the-ass landmark film — a cinematic stretching and weight-lifting exercise that makes you feel strong and brave at the end of the day. It made me feel as if my mind was being pulled like turkish taffy, but it’s a very good thing to live in a world in which highly intelligent $160 million mindfuck movies are still being made.”

The Wrap‘s Steve Pond has noticed how Inception is sitting on a very high fence right now, but teetering. “[Inception director] Christopher Nolan is on top of the world this week. In Hollywood, that’s not always the best place to be.”

Alejandro Gonzales Inarritu‘s Biutiful still hasn’t landed as distribution deal two months after its Cannes Film Festival debut. The reason, I gather, is that distributors fear that it’s too much of a downer (scruffy Barcelona, a gloomy-eyed protagonist, ghosts, cancer, mental illness), especially with a significant percentage of Cannes critics (like EW‘s Owen Gleiberman) having put it down.

A lot of people (myself included) thought Biutiful was the shit — one of the finest 2010 films thus far. And you’d think that Javier Bardem having won the Best Actor prize at Cannes would have spurred some kind of deal by now. But the Eloi mentality has spread like a virus (a San Francisco friend told me last night she isn’t interested in seeing anything that isn’t “pure entertainment”), and any film that doesn’t deliver some kind of cinematic quaalude high (laughs, emotion, visual wows) is in a fix right now.

Perhaps distributors are squeamish about the cost of U.S. rights plus funding a Best Actor campaign for Bardem. But mainly, I suspect, the prospect of the Gleiberman gang delivering a barrage of deft knife jabs when Biutiful opens stateside has given them the willies. It’s been said that film critics have no power anymore. Well, they do.

Awards Daily‘s Sasha Stone wrote one of the most eloquent Biutiful raves during Cannes. Here it is.

I called it “a sad and deeply touching hard-knocks, lower-depths drama in the tradition (or along the lines, even) of Roberto Rosselini‘s Open City or Vittorio DeSica‘s The Bicycle Thief. How’s that for high praise out of the gate ?

“Set among the poor and deprived in Barcelona, it’s about love and caring and continuity and carrying on among those who have it toughest, and dealing with guilt and tradition and the approaching of death and all the rest of the stuff that we all carry on our backs.

“Every actor is exactly right and spot-on in this film, but Javier Bardem gives a truly stellar performance in the title role of an illegal migrant labor and street-vendor manager-facilitator.

“[The film] starts out brilliantly, and then slips into a longish character-introducing, character-building, filling-in-the-details phase that goes on for a 90 minutes or so, and then — bit by bit, and then in increasing increments — it starts to emotionally kick in. And that’s when I knew it was delivering something special.”