Aaron Aradillas and Matt Zoller Seitz have posted the fifth chapter in a six-part series called “Razzle Dazzle.” The focus is “a disreputable offshoot of the traditional hero: an eloquent, exuberant, often impolite figure who serves as a town crier or truth-teller figure (or seems to).” A very wise and well-cut piece, but who’s the female narrator?

I love the vaguely implied analogy between Lonesome Rhodes and Glenn Beck.

“Unlike the traditional hero, the maverick seems to take a more active role in shaping his image and connecting with the public,” the copy reads. “He’s an outsider who uses mass media to articulate the audience’s fears and yearnings, and whose charisma spurs them to action.”

What does Richard Donner‘s Maverick have to do with any of this? Nothing, but here’s the best review I ever heard of it: “A $75 million dollar Elvis Presley film.”

What does this kid know? Okay, he knows what he likes. He’s seen a lot of Stallone films (even Paradise Alley!) but has he seen The Dogs of War? “Taste is a result of a thousand distastes” — Francois Truffaut.

Stanley Kubrick would have turned 82 yesterday if he’d lived. He’d still be directing, of course, but considering that the periods between his films became longer and longer the older he got, he probably would have made only one more film after Eyes Wide Shut, and he’d still be cutting it now. His relationship with Warner Bros. wouldn’t be the same, needless to add. He probably would have jumped ship, now that I’m thinking it through, and gone over to Fox Searchlight.

So you’ve got Universal Home Video’s Psycho Blu-ray out on 10.19, and the British version of what I presume is the exact same disc, via Universal Pictures UK, released on August 9th, or 13 days from now. So I’m figuring I’ll order the latter and watch it way before. Except (and here’s where the dumb part comes in) I’m not 100% certain if British Bluray is playable on a US non-multi-region Bluray player. I’m really that clueless. 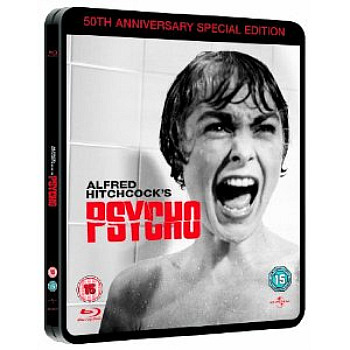 As we speak, Aaron Schneider‘s Get Low (Sony Classics, 7.30) has a 100% Rotten Tomatoes score. Which it fully deserves, in my book. Except the review by Hollywood Reporter critic Kirk Honeycutt is a little sourpussy, so the film isn’t pulling a perfect score in the sense that Don Larsen pitched a perfect game. Metacritic has taken Honeycutt’s review into account and given Get Low an 81% score.

it’s early yet, of course. We haven’t yet heard from Armond White, I mean.

“I kept waiting for Jay Roach‘s Dinner for Schmucks to run out of steam or jokes — but it rarely did,” writes Marshall Fine. “Not that the laughs built to a big payoff. Nor did they evoke the kind of gasping-for-air quality that, say, The Hangover did. But director Roach, working from a script by David Guion and Michael Handelman, regularly jolts you with enough unexpected and wonderfully weird moments that you rarely grow impatient with this broad comedy.

“Indeed, I’d count this film as one of the rare — very rare — examples of a film adapted by Hollywood from one of those French farces that Francis Veber seems to toss off in his sleep that actually works (The Birdcage is one of the only other ones I can think of). Roach and his writers succeed because they turn the story into something uniquely their own, without losing the core of the original. Indeed, as I recall, the Veber original was one of his lamer efforts – which means that the Americans have improved upon it.”

I want to believe you, Marshall, but I can’t. I just can’t. Steve Carell‘s blonde goony-bird characterization just stops me in my tracks. It’s a character based on the desire of an actor to be funny in order to make people laugh in order to sell tickets in order to make money.

I feel moderately so-so about the 2010 Toronto Film Festival, based on the lineup announced so far. But I’m not, to be honest, feeling that old drooly-mouthed sensation. When I go to Toronto I want a nice ripe spotlight feeling — “this is it! right here! nowhere else!” — and all I’m getting from the current lineup is a kind of pretty-good, very-promising, B-plus (or possibly A-minus) response. All this means, I’m presuming, is that the light switch hasn’t been turned on yet.

I want to see William Monahan‘s London Boulevard there. I’ve said before that I want Terrence Malick to stop pissing around and show The Tree of Life there. I’d like Edward Zwick‘s Love and Other Drugs to make an appearance, at least for Anne Hathaway ‘s sake. I’d like to see David O. Russell‘s The Fighter show up. And now that you mention it I wouldn’t mind seeing Doug Liman‘s slightly re-edited Fair Game.

In my view the current power-groove submissons are (1) Robert Redford‘s The Conspirator (the script for which I’ve read and voiced admiration for), (2) John Cameron Mitchell‘s Rabbit Hole, although I’m a bit nervous about that title, (3) Julian Schnabael‘s Miral (which a friend is seeing this week in LA, by the way), (4) Alejandro Gonz√°lez Inarritu ‘s Biutiful, (5) Tony Goldwyn‘s Conviction , (6) Mark Romanek‘s Never Let Me Go, (7) Darren Aronofsky‘s Black Swan, (8) Ben Affleck‘s The Town, (9) John Madden‘s The Debt, (10) Tom Hooper‘s The King’s Speech, (11) Susanne Bier‘s A Better World, and (12) George Huckenlooper‘s Casino Jack, which I saw an early cut of last year, and quite liked.

The original trilogy by the late Stieg Larsson is not an interesting or intriguing work. At best it’s an airport lounge page-turner. It’s just “popular,” especially among younger women, which of course means nothing to the Movie Godz. Take a look at the most popular films of any given year going back to whenever. They’re mostly garbage.

So yesterday’s news from Deadline‘s Michael Fleming about Daniel Craig being cast in the Mikael Blomkvist role of the journalist with the damaged reputation who hooks up with Lisabeth Salander , blah blah is of limited interest.

The big news, of course, is which young actress will get the Salander role. Why is it taking so long to decide this? Fleming is re-reporting that top candidates include Ellen Page (too elfin, no sexual component), Mia Wasikowska (can’t remember how to spell her name, too opaque), Emily Browning (who?), Sara Snook (i.e., not Snooki from Jersey Shore), Rooney Mara (who?) and Sophie Lowe (who?).

What did Oliver Stone say that was so inaccurate and/or offensive? He used a certain kind of Tea Party-associated anti-Semitic shorthand — “Jewish domination of the media” — that is considered a huge no-no in this country, for obvious reasons. That plus the wearing of a thin, sinister-looking moustache is what essentially prompted the dust-up, which began with a two-day-old interview in the London Sunday Times.

Stone is an old anti-corporate, antiwar-machine lefty from way back. I’ve come to know him fairly well through personal contact over the years and through mutual friends, and because it takes one to know one, I suppose. He’s very bright, engaged, inquisitive, insightful, and bold-strokey in his thinking. The heat Stone is now receiving seems to be about certain parties believing that he’s suddenly revealed his true anti-Semitic colors. I don’t believe that for a second.

I do believe, however, that Stone has a Showtime series coming up called “Oliver Stone’s Secret History of America,” and that he’s decided not to trot out the usual homilies and rote history-class statistics when being interviewed. He’s going to go outside the safe zone. That’s what Stone does time and again (except when he made World Trade Center).

The other statements Stone made about Hitler and his supporters don’t seem all that weird. “Hitler was a Frankenstein, but there was also a Dr. Frankenstein,” he said. “German industrialists, the Americans and the British. He had a lot of support.” I’ve never read any books about the extent of Hitler’s support in these countries in the 1930s, but isn’t what Stone said more or less thought to be true?

Stone also said that Hitler “did far more damage to the Russians than the Jewish people.” This statement is certainly not inaccurate.

And yet the Holocaust, according to U.S. media and history books, is the reigning horror of World War II, and not the fact that almost one in seven Russians were killed by Nazi Germany. This impression is due, of course, to the racial hatred behind the Holocaust and to the coldly methodical manner in which German officers and soldiers carried out the attempted extermination of European Jewry. But why is it that awareness of the scale of Russian WWII deaths barely registers alongside the Holocaust in this country?

Stone was essentially observing that the U.S. media (as well as the public school history books) have placed an understandable but disproportionate emphasis on the Holocaust in considering the totality of horrors caused by Nazi Germany, and that certain powerful figures in this country’s big media constellation have probably had a hand in this. That doesn’t seem like a hugely crazy thing to say. Not that awareness of the Holocaust isn’t an immensely important lesson for each and every citizen to learn and reflect upon. But where are the Russian death museums in this country? Where are all the Russan death documentaries that have either won or been nominated for Oscars?

“In trying to make a broader historical point about the range of atrocities the Germans committed against many people, I made a clumsy association about the Holocaust, for which I am sorry and I regret,” Stone said in response. “Jews obviously do not control media or any other industry.”

Is Stone also saying that Neal Gabler was fundamentally mistaken when he wrote a book called An Empire of Their Own? Is he saying that a belief that Jews were heavily involved and invested in the 20th Century “needle trade” is an anti-Semitic myth? Is he saying that the diamond district in midtown Manhattan is run by Swedes and Danes? If so, this proves if nothing else that Stone is first and foremost an independent thinker.

Update: HE reader Jonathan Hartman reminds that Inception composer Hans Zimmer “already publicly talked about this at the SCL Screening in Los Angeles a week before the film opened. He and Inception‘s sound designer explained the musical concept, and particularly this specific link.

“Edith Piaf is all over the movie, in many scenes where the casual viewer wouldn’t even recognize it. For the record, Nolan has Edith Piaf in the script, but only played as the ‘wake up’ music. It was Zimmer’s manipulation of the material that gave them the idea to incorporate it everywhere.”

“He’s a monster, a sexual predator, and the most sensitive and civilized fellow you’d ever meet.” And “our disorientation [about these disparate qualities] is the strongest evidence of the filmmaker’s mastery.” So says N.Y. Times critic A.O. Scott, very succinctly, in his Critics’ Pick essay about James Mason‘s Humbert Humbert in Stanley Kubrick‘s Lolita (’62).

The Times web guys being who they are and always have been, they haven’t put this latest Critics’ Picks up on YouTube yet (although all of them end up on YouTube sooner or later). Nor do they allow embedding of Scott’s video essays off their own site. They do this deliberately to anger and frustrate people like myself.

One of my fondest Manhattan fantasies is that I meet up with one of these web guys at a party somewhere, and I get to unload all of my years of frustration — the countless times I’ve been excited and/or felt inspired by one of Scott’s essays but unable to post it on HE due to the Times‘ extremely annoying policies about timely YouTube sharing and embed codes. Almost the entire web world gets it these days — the number of sites that refuse to offer embed codes is less than miniscule now — and still the N.Y. Times techies won’t budge/re-think/adapt. They’re like Japanese soldiers refusing to come out of caves and surrender after the end of World War II.