I’m interested to a point in seeing the extra footage, but I’m not sure I’m interested in doing the whole “Avatar for 15 dollars in an IMAX theatre” thing again. I’d be into seeing it at a press screening or reviewing an extra-footage Bluray version, but I take it Fox isn’t offering either of these options in Manhattan. They just had a press junket in Los Angeles so you’d think they’d do something here. Maybe I’m just out of the loop.

“I was telling him for a long time to get out of that thing because there is only room for one captain on the ship. Instinctively I knew that Peter was going to take over and do the movie. Guillermo, to his credit, didn’t listen to me and wanted to do continue and had some great designs — and I have seen all the designs. Of course he would have done a spectacular job, but don’t we want to see Peter do it?

“He should do it and Guillermo should do his thing. That’s what I told both of them. You should just stay in your corners.” — James Cameron telling the Herald Sun‘s James Wigney about advice he gave to Guillermo del Toro about directing The Hobbit. (Via Movieline.)

Danny Boyle‘s 127 Hours, which stars James Franco, tells the true story of Aron Ralston, the mountain climber who amputated half his forearm with a Swiss Army knife in order to free himself after being trapped by a boulder for a full five days in ’03.

The theme of 127 Hours is about courage, “choosing life” — a brave kind of heroism. The first half-hour is reportedly dialogue-free, which sounds intriuging. I believe that the dialogue-free opening of There Will Be Blood lasted appproximately 15 minutes, give or take.

Fox Searchlight will be facing a marketing challenge, to say the least, in persuading Average Joes to want to see this, or to sit through the arm-hacking portion, at least. I’m

not trying to deflate anything or anyone. I’m just honestly asking myself a question that I’m sure others are grappling with as we speak. Who wants to see such a story?

If I was Ralston I wouldn’t walk around with a naked arm stub. I would get myself a cool-looking prosthetic Dr. No arm — black, nimble-fingered, powerful grip, etc. Or a T2 arm.

“‘Tis the thing behind the mask I chiefly hate; the malignant thing that has plagued mankind since time began; the thing that maws and mutilates our race, not killing us outright but letting us live on, with half a heart and half a lung and half an arm.”

I humped it all the way across the Williamsburg Bridge and across lower Manhattan to the Film Forum last night to catch a 3-D showing of Gorilla at Large, only to be stopped by this note on the ticket-seller’s window. I thought I might be able to cup my ears and tough it out, so I asked the ticket-taking guy if I could go in and listen to the sound of the unspooling 7:30 pm show before paying my $12 bucks. The actors were whispering to each other. It was like listening to throat-cancer survivors. 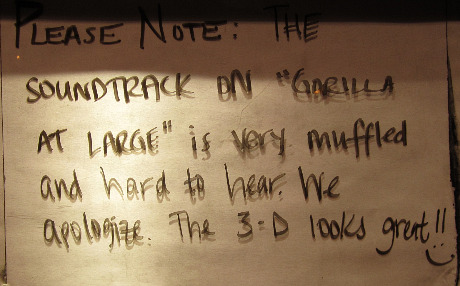 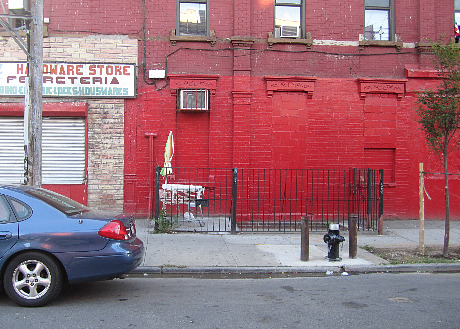 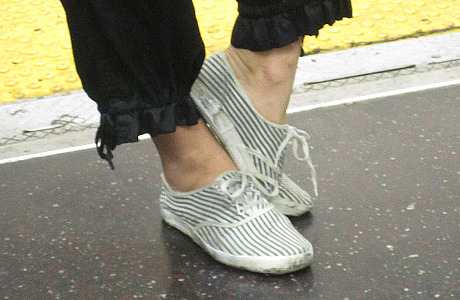 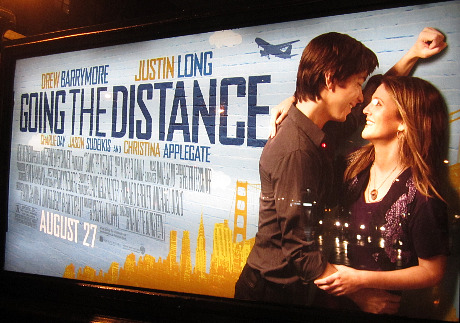 Scott Pilgrim vs. the World made an anemic $3.5 million yesterday, a dropoff of roughly 23% from Friday’s earnings of $4.5 million. Obviously those reports of a word-of-mouth downtrend were valid. The 23% falloff caused Edgar Wright‘s film to drop from fourth to fifth place. Inception had been in fifth place on Friday, and is now fourth with Saturday earnings of $4.8 million, an $11.8 weekend tally and a grand cume of $249 million.

I sometimes go into convulsions when some demonstrably awful film is the weekend champ, but this is one of those rare instances in which the wisdom of the crowd agreed with my prejudice and vice versa, hence my temporary sense of elation. This weekend will henceforth be referred to in the record books as The Great Scott Pilgrim Slapdown — i.e., a clear-cut verdict in which the rank-and-file sampled and rejected a film that had been celebrated and recommended by the elite geek-dweeb set.

I respect Scott Pilgrim for its spunk and style and Toronto localism, and for the occasional wit, the deadpan flatline attitude, the metaphor about having to deal with unresolved relationship histories, the video-game scheme and the kinetic action scenes that came out of that (until they got old from repetition). I hated much of it and was moved to brief thoughts of suicide a day or so after seeing it, true, but it’s not a “badly made” film. It’s entirely admirable in some ways. So it didn’t fail because it’s not, like, good enough. It failed because too many people told their friends they despised it. Isn’t that a logical conclusion, Devin Faraci?

Edgar Wright is not finished. He’s a bright and talented fellow. He simply needs to climb down off his stylistic high horse and calm down and make something straight and true and naturalistic. Okay, he doesn’t have to do this. He can do whatever he wants. But I think he needs to show, now, that he can deliver a good film without getting all tricky and showoffy.

The Expendables, the weekend winner, dropped a marginal 7% from Friday, resulting in $12.5 million yesterday and a possible $36 million Sunday-night total. The second-place Eat Pray Love barely went down at all yesterday, taking in $8.3 million for a projected tally for $24 million — obviously has legs. The Other Guys is holding third place and then some with $7.1 million yesterday (an upward surge from Fiday’s $5.7 million — a result of the Scott Pilgrim falloff?).