I’ve been invited to attend and cover the Doha Tribeca Film Festival (10.26 to 10.30), which is way the hell over in Qatar, adjacent to Saudi Arabia. We’re talking south of Kuwait, across the Gulf of Oman from Iran. I’ve never been east of Croatia so why not, right? Thanks to the Doha Film Institute for the invitation. I’m presuming it’ll be pure Vegas for the most part, but I’m looking very much forward to the exotic aspects.

This frame capture is from a DVD Beaver review of a new French Bluray of Sidney Lumet‘s Serpico. I don’t know the yeller, but the guy taking the heat is Al Pacino. I’m trying to think of the last time I’ve been howled and pointed at like this, but it’s been a while. Possibly decades, I mean. It’s really hard to think when emotions are cranked up to this level. 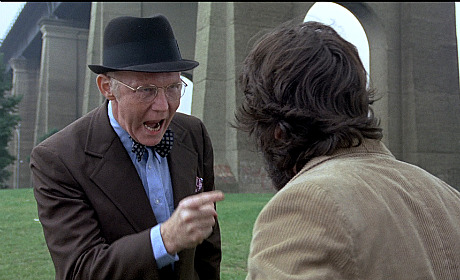 Below is a N.Y. Times video essay about a visit with the real Frank Serpico, who wandered around Europe after his NYPD experience (’60 to ’71), returned to New York in 1980 and finally wound up in a small town in upstate New York. His Wiki bio says he “studies and lectures on occasion to students at universities and police academies and sharing experiences with police officers who are currently in similar situations.

Also from the Wiki bio: “When it was decided to make the movie about his life called Serpico, Al Pacino invited Serpico to stay with him at a house that Pacino had rented in Montauk, New York. When Pacino asked why he had stepped forward, Serpico replied: “Well, Al, I don’t know. I guess I would have to say it would be because…if I didn’t, who would I be when I listened to a piece of music?”

I’d love to know the real story why Devin Faraci is departing CHUD as of this Friday. The Scott Pilgrim-adoring columnist is a major geek brand, as far as it goes. It seems odd that he and owner Nick Nunziata would part ways. Faraci announced his departure this afternoon, adding that he’s part of “an exciting new venture that launches this fall, which will offer lots of interesting partnership possibilities, both online and in the real world. I’ll be able to share more details in a couple of weeks.”

MSNBC’s Chris Matthews did a pretty good job yesterday of slapping down Republican gubernatorial candidate Rick Lazio, who’s been trying to inflame the anti-muslim 9/11 mosque issue to get a bump in the polls.

My very first act of film criticism in a public arena was in late ’70, or seven or eight years before I started writing. I was sitting shotgun in a car that was cruising past Westport’s Fine Arts theatre, and in front of it and wrapping around the building and way down the alley was a line of people waiting to see Love Story. I rolled down the window and yelled, “You effing milquetoasts!”

Some people turned and looked stunned, or hurt even, and I felt a little badly about that. But then I told myself, “Well, somebody has to say it.” It was common knowledge, after all, or commonly believed, that anyone who fell for that movie or the pablum behind it was being a total sentimental sap.

“What can you say about 25 year-old girl who died?”

That’s the second most famous line from Erich Segal‘s Love Story, which actually began as a screenplay before being turned into a book as a promotional tie-in for the Arthur Hiller-directed film, which opened in December 1970.

The most famous, of course, is “love means never having to say you’re sorry.” That line has probably made more people retch than any other in the history of motion pictures.

Thomas Vinciguerra‘s 8.20 N.Y. Times story about the annual Harvard rite of mocking Love Story is what brought it all back. I always though it a bit odd that the 25 year-old girl who died, a Radcliffe music student from Providence named Jenny Cavalleri, was played by Ali McGraw, who was pushing 32 when the film was made. McGraw is now 72 — amazing.

Angelina Jolie isn’t just the once-estranged daughter of Hollywood’s worst saliva-drooling Tea Party nutter, Jon Voight. She may also be a closet ally of Voight’s, at least in terms of despising Barack Obama. (Call this a flimsy maybe.) She also seems to be a supporter of America’s military adventures in Iraq and perhaps also Afghanistan and…well, basically anywhere that the poor are suffering due to the deprivations of war. 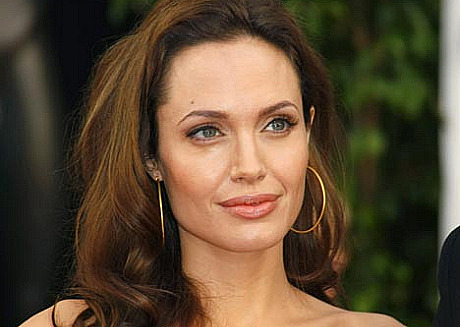 Jolie’s reasoning seems to be that because these conflicts are in some ways politically and governmentally linked with humanitarian support for the downtrodden, anyone who talks about withdrawing from these areas (like President Obama) is somehow anti-humanitarian. Or something like that. Because people whose lives have been torn to shreds by the horrors of war need to be sheltered and cared for, and who better to do this than a really rich hottie who wants to provide for as many of the bruised and battered as possible?

It’s well known that Jolie has a strong personal belief in humanitarian work — a general compassion for those whose lives have been ruined by war and famine, and the ceremonial UN Goodwill Ambassador thing, of course. So her plan to spend the fall directing a low-budget love story set against the Bosnian-Serbian war of the ’90s, a conflict which devastated the lives of tens of thousands, falls right into line.

Gregg Kilday‘s 8.22 Hollywood Reporter piece about the film said Jolie “was in Sarajevo, the capital of Bosnia and Herzegovina, this past weekend, meeting with the country’s leaders to discuss the plight of the more than 113,000 displaced persons living in the country.

But Jolie’s official quote about the film, calling it “a love story [and] not a political statement” is, of course, horseshit. Anyone who has ever said these words (and they’re hardly original) has more or less lied. All movies about wars and revolutions are political statements, and…well, think about it for five or six seconds. How could Jolie make a film of this sort without her political sympathies becoming part of the mix?

I don’t know how Jolie plans to weave her allegedly conservative views into a war-torn love story (maybe weave in information about the liberal Clinton administration doing very little to help end the Serb-Bosnian slaughter?), but I wouldn’t be at all surprised if this happens.

I only know what Jon Voight has said and stands for, and that I saw him standing near his daughter and Brad Pitt inside a roped-off area at the Salt premiere after-party. And the old cliche about the acorn not falling too far from the tree flew into my mind, especially considering her rep as a closet rightie (including her alleged support for McCain during the ’08 campaign) and that “stay the course in Iraq” Washington Post article she posted in ’08. And being…okay, maybe she’s more of an Ayn Rand libertarian, given her interest in making a film version of Atlas Shrugged.

It’s fair to say that if Rush Limbaugh is singing your praises, something stinks in the kingdom of Denmark.

The basic conservative impulse is to bow down and show total allegiance to authority. This obviously links up with the old cliche about right-wing women (like Rand) being especially passionate about worshipping strong males, which is incidentally why they’re said to be so great in bed. This could be one possible explanation for those reportedly overheard sounds that suggested “an animal being killed.”

I’m not one to take unsourced Us magazine quotes as anything to rely upon, but combine the Washington Post op-ed piece with this 11.09 non-attributable quote that Jolie considers Obama to be a “closet socialist,” and I’m at least thinking “hmmm.”

The term “closet socialist”….well, what’s so bad with that? FDR was one, and he had it right in my book. Anyone who uses such a term is clearly a closet rightie. I mean, that’s a symmetrical way of looking at it.

“‘She hates [Obama],” a source close to Jolie told an Us reporter, according to the article. “She’s into education and rehabilitation and thinks Obama is all about welfare and handouts. She thinks Obama is really a socialist in disguise.”