The script for Ivan Reitman‘s No Strings Attached, written by Elizabeth Meriwether, was originally called Fuckbuddies. Paramount wouldn’t release a film with that title so they renamed it Friends With Benefits — an okay substitute. But a Justin Timberlake film with the same title had dibs.

That ten-year-old *NSYNC track is the most familiar reference, but for me No Strings Attached is a decades-old Richard Rodgers title. What an ignoble ending for a script that everyone liked when it was on the Black List.

This trailer for Peter Weir‘s The Way Back is pretty much the same one that appeared three weeks ago, but it’s a little bit different so let’s give credit where slightly due and what the hell.

I liked Lost in Translation as far as it went, but otherwise I’ve never been a huge Sofia Coppola fan. But now I am. Last night I saw Somewhere (Focus Features, 12.22), an existentially arid Michelangelo Antonioni-ish art film. For me it contains the same “traces of feeling” that Antonioni said he was aiming for in L’eclisse (’62).

At last September’s Venice Film Festival, Indiewire‘s Anne Thompson asked Coppola, “[Given] the stately pace, are you a fan of Antonioni? Were you thinking about that kind of approach? There’s that element of taking your audience to the edge of your character’s boredom.”

And Coppola answered, “I love some of his films, he always made an impression…and Antonioni does do that. I mean, I must know that from watching his films. But I wasn’t thinking that directly.” However indirect the suggestion, Somewhere definitely has that mood of elegant contemplation, that sense of things being anxious and slightly corroded under the surface, that unhurried way of taking it all in.

In order to become a Best Actress contender this year, you apparently have to play a character who not only struggles (who doesn’t?) but suffers through anguish and misery. You can’t be nominated for playing someone who just plows right through with a robust personality and somehow makes it all work out. You have to wear the yoke around your neck and show the hurt and the steel that it takes to get through difficult stuff. 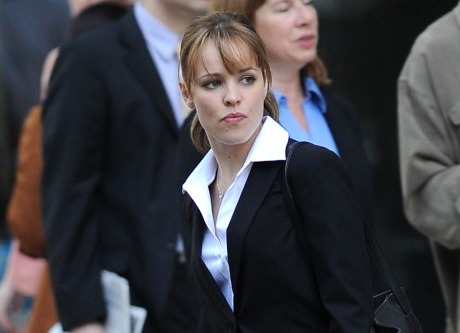 Because if you didn’t have to do that, Rachel McAdams‘ irrepressible, never-say-die Morning Glory character could leap right into the Best Actress arena. Her character, a TV morning-show producer, has the drive and pizazz to finesse a tough job in a brutal, high-pressure environment.

But no — today’s rule is that tears have to stream down your cheek and you have to get bruised and pushed and kicked around.

Black Swan‘s Natalie Portman, portraying a Manhattan ballet dancer, suffers through intense insecurity and anxiety about whether she’s good enough to satisfy her director and stave off a competitor. Poor Annette Bening suffers the pain of marital betrayal in The Kids Are All Right, and Julianne Moore — the cause of Bening’s anguish — bears the guilt of having jumped into an impulsive, unwise affair. Another Year‘s Lesley Manville is constantly grappling with alcoholism and loneliness. Jennifer Lawrence suffers through constant suspicion, hostility and threats in Winter’s Bone. Nicole Kidman‘s character is tortured by the relatively recent death of a young son in Rabbit Hole. Anne Hathaway is dealing with first-stage Parkinsons disease in Love and Other Drugs. During half of Blue Valentine Michelle Williams is grappling with a marriage that’s lost its spark and is heading downhill. And I Am Love‘s Tilda Swinton plays a Russian-born wife of an Italian industrialist whose affair with a younger man (a chef) invites terrible tragedy.

Think about Diane Keaton winning Best Actress for Annie Hall 32 years ago, and how the only downswirl issues her character went through were relationship problems with Woody Allen. That kind of female role doesn’t seem to be happening any more. Not lately it hasn’t, and certainly not this year.

I’m basically saying I wouldn’t mind if the woe-is-me moodface from all those highly-touted female performances was enlivened by a little spritzy can-do by way of McAdams. 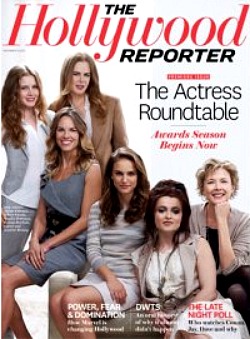 Meet the mopies — always with the tears and the stress and the anguish and the pain. (Except, possibly, in the case of Amy Adams — I haven’t seen The Fighter yet.)
November 4, 2010 9:29 amby Jeffrey Wells
2 Comments
Bernardo

Remember that moment in Blazing Saddles when “new sheriff” Cleavon Little said “let me just whip this out” and the crowd screamed and recoiled? Mel Brooks knew, and so, presumably, does Scott Feinberg. 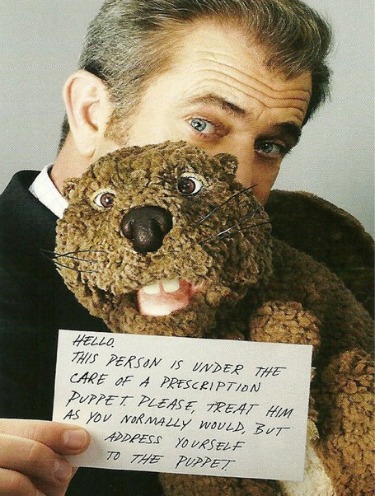 Isn’t using the image of a tree kind of a literal-minded thing to do? (And with a metaphorical ladder leaning against it?) And how come Brad Pitt‘s name is above Sean Penn‘s? Penn is the central protagonist while Pitt plays a supporting character (i.e., the adolescent Penn’s dysfunctional bad dad) in the flashback sequences. And don’t you need something to balance that little house with the yellow-glow windows on the lower right? Like, for instance, the silhouette of a Tryceratops or Tyrannosuarus Rex on the lower left? 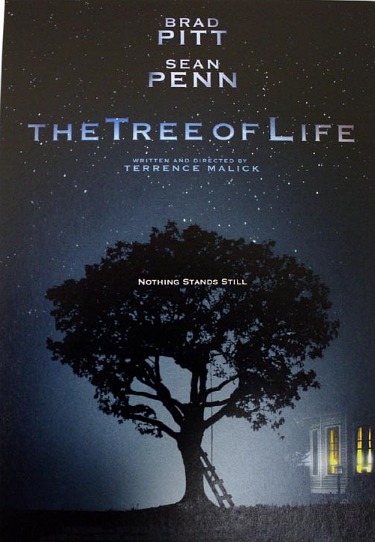 This Hollywood Reporter‘s just-posted Best Actress round-table includes Annette Bening (The Kids Are All Right), Helena Bonham Carter (The King’s Speech), Natalie Portman (Black Swan), Nicole Kidman (Rabbit Hole), Hilary Swank (Conviction), and Amy Adams (The Fighter)…fine. Swank is a non-contender and I’m not convinced that Carter, excellent as she is, is a Best Supporting Actress favorite but okay, whatever.

Kids Are All Right costar Julianne Moore wasn’t invited because she was at the London and Rome film festivals. Another Year‘s Lesley Manville wasn’t in town, I presume. Blue Valentine‘s Michelle Williams and Winter’s Bone contender Jennifer Lawrence were in England shooting. And nobody was focusing on Love and Other Drugs star Anne Hathaway or Morning Glory star Rachel McAdams when this thing was taped on or about 10.25.

Another corporate CG entertainment intended to narcotize the nodding masses with a fake default “liberate yourselves!” message. Hot babes (Emily Browning, Abbie Cornish, Jena Malone) behind bars. The fight against the machines. Any movie with Scott Glenn portraying a wise, all-seeing Obi Wan Kenobi guru type in a white robe (who is literally called, believe it or not, “Wiseman”) is an automatic level 10 on the HE bullshit meter.

“To see just how our system was rigged by the financial, political, and university elites, run, don’t walk, to a showing of Charles Ferguson‘s Inside Job,” said Bill Moyers in a 10.29 Boston University speech honoring Howard Zinn. “Take a handkerchief because you’ll weep for the republic.”

Moyers was describing the poisoning of the American political system by way of “a 30-year trend” — i.e., one that began with Ronald Reagan — “toward plutocracy, where the rich get richer at the expense of the average citizen.”

The spreading corruption funded by this plutocracy is easily the one fundamental water-table evil of our times — the central pipeline of political pollution from which myriad wrongs and nutter lies and smoke-screens are being fed. One would think that recognizing this could become a basic bond uniting progressives and tea-partyers alike. If Barack Obama had the stones to say what Moyers said a few days ago in this speech, people would rally behind him like never before.

But no — Obama talks instead of John Boehner and Michelle Bachmann and the corporate-funded right as honorable Americans with whom he’d like to find “common ground.” What delusion! Nobody knows how to capitulate to evil better than Barack Obama.

The stink of rhetorical horseshit that filled the East Room during Obama’s post-election-wipeout press conference yesterday afternoon represents the fundamental lie that will erode and destroy his Presidency if he doesn’t wake up. The super-rich have pretty much taken over everything — not just the government but much if not most of the political donation streams going to the major parties, as well as most of the major media news organizations. (I was listening to CNN’s Wolf Blitzer ramble on about the meaning of the midterms yesterday, and the man is nothing but a corporate lackey and a jack-in-the-box entertainer who spews “white noise” pollution.)

President Obama will never admit it and Blitzer and his ilk will never tell you that what’s happening right now is far more pernicious than the corruptions that took root during the age of the turn-of-the-century robber barons.

“To remember a thing, you must first name it,” Moyers said. “We’re talking about slush funds. Donors are laundering their cash through front groups with high-falutin’ names like American Crossroads. That’s one of the two slush funds controlled by Karl Rove in his ambition to revive the era of the robber barons.

“Promise me you won’t laugh when I tell you that although Rove and the powerful Washington lobbyist who is his accomplice described the first organization as ‘grassroots’, 97% of its initial contributions came from four billionaires. Yes: The grass grows mighty high when the roots are fertilized with gold.

“Rove, other conservative groups and the Chamber of Commerce have in fact created a ‘shadow party’ determined to be the real power in Washington just like Rome’s Opus Dei in Dan Brown‘s The DaVinci Code. In this shadow party the plutocrats reign.

“We have reached what the new chairman of Common Cause and former Labor Secretary Robert Reich calls “the perfect storm that threatens American democracy: an unprecedented concentration of income and wealth at the top; a record amount of secret money, flooding our democracy; and a public becoming increasingly angry and cynical about a government that’s raising its taxes, reducing its services, and unable to get it back to work.

“That word again. But Reich is right. That fraction of one percent of Americans who now earn as much as the bottom 120 million Americans — a group that includes the top executives of giant corporations and those Wall Street hedge funds and private equity managers who constitute Citigroup’s ‘plutonomy’ — are buying our democracy and they’re doing it in secret.

“That’s because early this year the five reactionary members of the Supreme Court ruled that corporations are ‘persons’ with the right to speak during elections by funding ads like those now flooding the airwaves. It was the work of legal fabulists.

“Corporations are not people; they are legal fictions, creatures of the state, born not of the womb, not of flesh and blood. They’re not permitted to vote. They don’t bear arms (except for the nuclear bombs they can now drop on a congressional race without anyone knowing where it came from.) Yet thanks to five activist conservative judges they have the privilege of ‘personhood’ to ‘speak’ — and not in their own voice, mind you, but as ventriloquists, through hired puppets.

“Does anyone really think that’s what the authors of the First Amendment had in mind? Horrified by such a profound perversion, the editor of the spunky Texas Observer, Bob Moser, got it right with his headline: ‘So long, Democracy, it’s been good to know you.'”

[Will somebody explain why the video plays fine on the Boston University origin page, but won’t play when you copy the embed code and reconfigure the dimensions and paste it onto your own page?]